The new climate accord represents the triumph of realistic, bottom-up thinking over elegant but unworkable top-down solutions. Here’s how a deal hatched in Warsaw two years ago opened the possibility of forging a global deal that includes both market mechanisms and ‘Mother Earth’.

15 December 2015 | When French Foreign Minister Laurent Fabius banged his little green gavel on Saturday to signal the adoption of the Paris Climate Accord, he also took a decisive whack at an illusion that has done almost as much to stifle climate action as climate-science denial has.

It’s an illusion that features prominently in books like Naomi Klein’s This Changes Everything, and it’s explicitly delineated in the book’s subtitle (“Capitalism vs. The Climate”). My high-school philosophy teacher would call it a “false duality”, because it says that climate change is either a moral challenge or an economic one, when in fact, it’s both, and meeting the challenge one way doesn’t preclude meeting it the other.

The illusion has stifled real progress on climate talks almost since they began in 1992, but it started losing its grip two years ago, on a frigid morning in Warsaw, when negotiators abandoned the quixotic quest for a one-size-fits-all, top-down agreement like the failed Kyoto Protocol and aimed instead for a global framework within which countries can embed their own unique climate action plans. 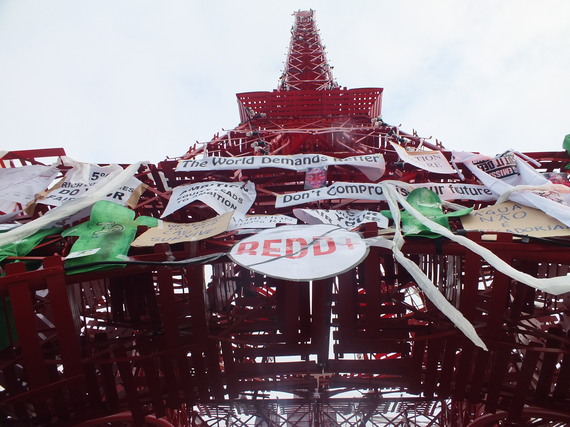 We’ll never all agree on everything, and now we don’t have to.
The Paris Patchwork Accord
Instead of dividing the nations of the world into three neat categories – developed, developing, and “in transition” – the new framework acknowledges that each country is unique, and that different philosophical approaches can be employed in pursuit of the same goal.

It acknowledges that we need to fix the economic system, not destroy it, and it rejects the false duality between morality and markets, encouraging instead the development of moral markets that are well-structured, well-run, and well-regulated – and that every country is free to use or not use. It even blends scientific concepts like biodiversity and ecosystem integration with indigenous concepts like Mother Earth, who is explicitly mentioned in the preamble.

[“Paris And The Amazing Technicolor Charm-Quilt: Why This Year’s Climate Talks Really Are Different“.]

Elegant Simplicity
The Agreement itself is just 31 pages long and contains only 29 articles, but each of those articles is either bolstered by hard-won decisions or lays out a process for achieving more decisions in the future. It’s a work of simple elegance worthy of James Joyce, and I’m not joking: change one word, and the whole thing crumbles.

[For more on the importance of words, see Politico’s piece on the “one word that almost sank” the talks.]

Let’s take just one article – Article 5 – which is the one dealing with forests and REDD+, a horrendous acronym that stands for “Reducing Emissions from Deforestation and forest Degradation” plus a slew of other activities related to sustainable land-use. Before diving in, you’ll need a quick primer on the history of REDD+ itself.

REDD Dawn
REDD began percolating way back in the early 1970s, when physicist Freeman Dyson asked a simple question: “Can we control the carbon dioxide in the atmosphere” by planting trees that breathe in carbon dioxide and breathe out oxygen? His answer: yes, we can, but we’d still need to slash our industrial emissions to prevent catastrophic climate change. In the late 1980s, a policy analyst with the World Resources Institute named Mark Trexler realized you could sponge up even more carbon dioxide if you saved endangered rainforest rather than planting new trees, and the energy company Applied Energy Services (AES) worked with him to reduce their carbon footprint by doing just that.

To measure the carbon, they used the same process that timber companies use to estimate the amount of wood in a forest: basically, measuring trees at chest-height and then applying “allometric equations” to see how much wood – and, by extrapolation, carbon – they contained. To determine which parts of the forest were in danger, they used a combination of econometric modeling and historic rates of deforestation (a process that was rudimentary at the time and resulted in over-counting, but which has been improved and refined over the years).

Since then, indigenous people from Brazil to Kenya have used REDD to save endangered forest by jump-starting sustainable business activities like harvesting acai berries or Brazil nuts, or even just adopting more efficient woodstoves. From the start, however, REDD was plagued by the false duality that sees an either/or relationship between morality and markets – a view just as crippling as the pure free-market fundamentalism that got us into this mess. (It’s a way of thinking that also concludes you either save the forests or you reduce industrial emissions; in reality, we must do both.)

Article 5: REDD+
Article 5 contains just two paragraphs, but those paragraphs refer to at least a dozen decisions and elements of other agreements, and the entire history of this extraordinary document is there if you know to look for it.

Paragraph 1: Parties should take action to conserve and enhance, as appropriate, sinks and reservoirs of greenhouse gases as referred to in Article 4, paragraph 1(d), of the Convention, including forests.

This refers to that part of the framework convention itself that recognizes “common but differentiated” responsibilities between rich and poor countries, and also the need to promote the sustainable management of natural carbon sinks, including “biomass, forests and oceans as well as other terrestrial, coastal and marine ecosystems.” It’s echoed in the Paris agreement, which recognizes the “importance of ensuring the integrity of all ecosystems, including oceans, and the protection of biodiversity, recognized by some cultures as Mother Earth, and noting the importance for some of the concept of ‘climate justice’, when taking action to address climate change.”

Paragraph 2: Parties are encouraged to take action to implement and support, including through results-based payments, the existing framework as set out in related guidance and decisions already agreed under the Convention for: policy approaches and positive incentives for activities relating to reducing emissions from deforestation and forest degradation, and the role of conservation, sustainable management of forests and enhancement of forest carbon stocks in developing countries; and alternative policy approaches, such as joint mitigation and adaptation approaches for the integral and sustainable management of forests, while reaffirming the importance of incentivizing, as appropriate, non-carbon benefits associated with such approaches.

This is a mouthful, so let’s break it down. “Results-based payments,” means money, to be paid from one country to another based on the amount of extra carbon the receiving country keeps locked in forests as a result of actions that countries take to slow deforestation. These payments may be “market-based”, which means the country paying for them then gets to reduce its own emissions by the additional amount of carbon locked in trees, or they may be “non-market” based, in which case the country receiving the payment also gets credit for the emission-reduction achieved – but that is dealt with in Article 6.

“The existing framework as set out in related guidance and decisions already agreed under the Convention,” refers to roughly a dozen decisions made over the years regarding the measurement of forests, the establishment of reference levels, and the role of indigenous people in preserving forests.

“Activities relating to reducing emissions from deforestation and forest degradation” refers to REDD, but without mentioning the acronym directly, because it’s become a target for people with duality delusion syndrome.

“While reaffirming the importance of incentivizing, as appropriate, non-carbon benefits associated with such approaches,” refers to things like biodiversity and the protection of indigenous rights.

The Year Ahead
The next article – Article 6 – is different from Article 5, because it deals more with the job to come than with the job completed. Specifically, it lays out a workplan for developing payments for performance that are either market-based or non-market based, or both.

We’ll dive into this one later in the week, and shine a light on a process that’s sure to generate sparks in the year ahead – in part because it’s a complex issue with real challenges, but also because Fabius only took a whack at the illusion. He didn’t shatter it.