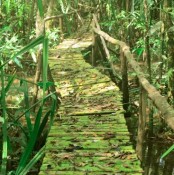 Beyond the fact that each of these endeavors harness carbon markets to reduce greenhouse gas emissions by saving endangered rainforest, each of them has been spearheaded by private initiatives working closely with national, state, and local governments, which means each has managed to identify risk mitigation tools – that appeal to both the private and public sectors.

Each, therefore, is ripe with lessons for anyone looking to develop REDD interventions that will make the leap from “project” to “program” – i.e. from private and local, to public and jurisdictional. Admittedly, there are still gaps in information on finance and activities at the project level, but, Ecosystem Marketplace has been tracking private sector projects since 2005, reporting forest carbon data on the Forest Carbon Portal and in Ecosystem Marketplace’s annual State of the Forest Carbon Markets reports designed to explore these lessons and results.

Through focusing tracking on the project level we have found that the private sector was more likely to support projects that reported at least one revenue stream other than carbon offset sales, like sustainably commodity (including Fairtrade-certified) sales revenue or donor government contributions. The presence of additional non-carbon revenues suggests to private sector actors that the project is more likely to be financially viable in the case that carbon markets are not a long-lived source of project financing. Our more recent findings illustrate that private dollars are also “mobile” – with businesses preferring to catalyze new activities in new locations, which is not inherently conducive to large-scale, long-term REDD activities.

Based on these findings, is the profit motive alone too capricious to support and expand REDD efforts? Should the burden of forest conservation instead rest solely with forests’ traditional public sector custodians? In reality and as reported last week by UNEP FI, seasoned stakeholders conclude that both public and private actors must be at the table if the world is to support existing forestry and land use carbon projects (total of $2.2 – $5.4 billion over an unspecified timeframe, according to Ecosystem Marketplace’s 2012 survey data; cut deforestation in half between 2015 and 2020 ($75 – $300 billion according to Resources for the Future estimates); or protect the world’s hectares that are currently under threat ($1 trillion, based on 55.5 million hectares that will be lost between 2010 and 2020, as estimated by WWF, multiplied by average price per hectare paid for REDD offsets in 2011 [$20/ha] based on Ecosystem Marketplace data). Regardless of your metric of choice, the price tag is too high to ignore anyone with insights into how a significant source of finance can be incentivized to act.

To this end, private project developers that have honed their business models to become market “survivors” provide proof of concept for the idea of internationally-financed conservation forestry. They have an inherent understanding of why the private sector steps in – or backs out of – forest finance, learned over now-decades of direct experience with private sector stakeholders. They also boast first-hand experience with national and regional government approval processes and gaps in capacity – often including a deep understanding of the extent of local governments’ capacity for enforcement.

Many actors already understand the value of lessons gleaned from these private pilot actions, which is why the Verified Carbon Standard and the American Carbon Registry are working with national governments on Jurisdictional Nested REDD (JNR) that ensure existing projects can be absorbed into national accounting programs. It’s why the Norwegian government is even helping to pilot nested programs around the world.

And it’s why Forest Trends’ Ecosystem Marketplace and REDD Expenditures Tracking initiatives are tracking payments – both public and private, top-down and bottom-up – to uncover “sweet spots” where emerging government REDD programs have successfully engaged the private sector as investor, implementer, or (in an ideal world) both. Private lessons for the public sphere to increase private investment, therefore, include (but are not limited to):

Unless policymakers are willing to incorporate more lessons from the companies that are already buying REDD project offsets or from the developers who are creating them, they run the risk of re-creating the Kyoto Protocol’s sub-optimal treatment of forest carbon offsets. The world needs a mechanism that incorporates tested methods that work. And that requires more funding for pilot projects and more efforts to harvest existing projects for insights that can be broadcasted from the boardroom to Bonn.