Few things are certain regarding the international climate negotiations taking place in Warsaw this week. But UNFCCC Executive Secretary Christiana Figueres sees a role for both the beleaguered Clean Development Mechanism (CDM) and Reduced Emissions from Deforestation and Forest Degradation (REDD+) projects, assuming REDD projects can overcome their financing challenges. 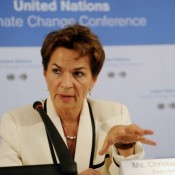 Few things are certain regarding the international climate negotiations taking place in Warsaw this week. But UNFCCC Executive Secretary Christiana Figueres sees a role for both the beleaguered Clean Development Mechanism (CDM) and Reduced Emissions from Deforestation and Forest Degradation (REDD+) projects, assuming REDD projects can overcome their financing challenges.

15 November 2013 | WARSAW | Despite the challenges in the Clean Development Mechanism and Reduced Emissions from Deforestation and Forest Degradation (REDD+), both mechanisms are likely to find a place in the international climate agreement expected to be reached in 2015, said UNFCCC Executive Secretary Christiana Figueres.

The future of REDD+ has been a major topic of discussion and debate at the international climate talks in Warsaw this week as developed and developing countries strive to reach enough common ground on issues such as reference levels and monitoring, reporting and verification to allow billions of dollars to be directed toward these projects.

In a question-and-answer session hosted by Dirk Forrister of the International Emissions Trading Association, Figueres said she is optimistic that REDD+ can serve as a mechanism in the climate agreement being negotiated. “I think there’s a good chance of it being included and it’s moving in that direction,” she said. However, the challenge for REDD relates to funding. “That’s a much more difficult question.”

Figueres also sees a future for the CDM, as African countries remain interested in an agreement that will preserve and strengthen the struggling market, something that was the major topic of conversation at the Africa Carbon Forum in July. South Africa is leading the call to reform the CDM and ensure its place in a future climate agreement.

“As you heard from the Africans, I think there is a true legitimate interest in building up the CDM because there are many countries that felt left out and still feel left out and that feel more comfort with mechanism that is more broadly known, for which the rules are there,” Figueres said. “It’s just a more comforting space to move into.”

Even moving into a broader scope for new market mechanisms, there will still be room for the CDM, both for individual projects and for Programme of Activities, she said.

Figueres cited three exciting market developments from the past year, including her home country Costa Rica launching a domestic carbon market in September. “It’s about showing yet again that no matter how small you are and how clean you are, that you can still make an effort toward reducing your emissions even more and that market mechanisms are a really good way to do that,” she said.

On a much larger scale, China’s launching of its pilot carbon trading programs was another key highlight, she said. It was interesting to see the country motivated by a confluence of factors, including global health and the realization that this action was necessary to maintain its competitiveness in the world, Figueres said. “All of those national agendas playing into and serving a global purpose is actually very exciting,” she said.

The International Civil Aviation Organization finally finding some common ground in an effort to address emissions from the aviation sector was another critical development, she said.

“They had such a torturous time trying to figure out how, in a concept that is not under United Nations rules and principles and the framework convention for climate change, do they then account for emissions in their context,” Figueres said. “They weren’t able to get an agreement on that, but they were able to get an agreement on moving forward with their market mechanisms. That’s also very good news and something we look forward to working with them on.”

But markets are only one key, fortunately not the only mechanism to addressing the climate challenge, she said.

“I do think we have to begin to see markets as one financial instrument and not the only one,” Figueres said. “It’s very clear the markets will never be able to mobilize the kind of investment that we need to mobilize into mitigation. I see the market as one of the elements we are going to have to combine into a financial architecture that is going to be able to leverage mitigation.”

Gloria Gonzalez is the Senior Associate in Ecosystem Marketplace’s Carbon Program. She can be reached at ggonzalez@eocsystemmarketplace.com.