REDD+ emerged from the Doha climate talks well ahead of overall negotiations, despite disagreement over how to verify and validate emission-reductions. Indeed, REDD and LULUCF appear to be evolving into a larger mechanism that incorporates climate-safe agriculture as well, according to REDD-plus facilitator Tony La Viña, who co-authored this analysis on the eve of the Doha conference. 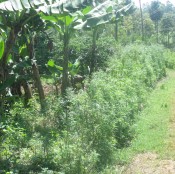 REDD+ emerged from the Doha climate talks well ahead of overall negotiations, despite disagreement over how to verify and validate emission-reductions. Indeed, REDD and LULUCF appear to be evolving into a larger mechanism that incorporates climate-safe agriculture as well, according to REDD-plus facilitator Tony La Vií±a, who co-authored this analysis on the eve of the Doha conference.

This article has been adapted from the working paper “The Road to Doha: The future of REDD-Plus, agriculture, and land-use change in the UNFCCC”, published by the Foundation for International Environmental Law and Development (FIELD) and available for download here. The full paper offers a comprehensive summary of REDD-plus and LULUCF negotiations in the lead-up to Doha, as well as this assessment of agriculture within the UNFCCC.

21 January 2013 | The 2012 United Nations Climate Change Conference in Doha officially launched the Durban Platform for Enhanced Action (ADP), which aims to establish a new legal instrument by 2015 that comes into force by 2020.

At this point, it would be wise to take a step back and assess how the multiple streams of progress achieved under the AWG-KP, AWG-LCA, ADP and REDD-Plus ultimately set the stage for the future of land-use issues under the UNFCCC.

There is no doubt that REDD-Plus and LULUCF, while not perfect, have advanced beyond the expectations of many.

The former, in particular, has managed to create for itself a platform that does not entirely depend on the UNFCCC for action but instead has created enough good will among governments and diverse stakeholders to go on their own and generate valuable experiences that establish early action for forest protection.

And LULUCF, while for a long time full of controversy over complex accounting rules and environmental integrity issues, has emerged with a relatively robust mandatory accounting system for forest management activities.

Agriculture, on the other hand, has largely fallen on the wayside under the LCA, having failed to secure a political and substantive basis for further work beyond just sectoral approaches. This gap has been the subject of much debate outside the negotiations as agriculture was largely seen as a make or break issue for both the Cancun and Durban conferences. And yet, its downplaying persists under the LCA. Under KP, cropland and grazing land management are included as eligible activities under LULUCF but only as voluntary activities. This is mainly due to difficulties in accounting, although breakthroughs have been made in recent negotiations and informal discussions that could potentially influence future discussion towards mandatory and comprehensive accounting for LULUCF that would include agriculture.

All this begs the question of where, how and when will land-use issues be taken up starting 2013. And such questions should be considered against the backdrop of change that the ADP is catalyzing in terms of focus and shifting discourses.

So while the ADP sets out on its visioning and work planning processes, we quickly speculate on the possible futures of REDD-Plus, agriculture and land-use change in the UNFCCC.

The ADP addresses large, sweeping questions such as improving the level of ambition on emissions reduction and financing, MRV, and establishing the role of mitigation mechanisms such as REDD-Plus towards assisting developed and developing countries meet commitments.

Timing-wise, the years between 2013, 2015, and 2020 could be organized to explicitly scale-up phase 1 and phase 2 activities in developing countries, with the SBI monitoring implementation, sharing best practices, and promoting further demonstration and experimentation.

This would mean that come 2015, a clear signal from the ADP should already have been established to create demand and drive investment into REDD-Plus around the world. And this can only be achieved with clear decisions under the ADP on how REDD-Plus will interact with elements such as raised mitigation commitments from both developed and developing countries, MRV, finance, and new market mechanisms under a new protocol, and not to mention language within the ADP and the new protocol supporting continued country efforts to establish REDD-readiness and demonstration.

Come 2020, when a new protocol with all these elements is officially in place, REDD-Plus can transition smoothly into phase 3, where hopefully a far larger institutional machinery will keep supply and demand for REDD-Plus stable, and financial support for performance based payments are sustained through REDD-Plus credits by developed countries, or by in-country support through NAMAs.

What makes REDD-Plus ultimately interesting to watch between 2013 and 2015 is if it will go the path that LULUCF did under the KP of entertaining drawn-out negotiations towards a strict, rules-based accounting regime. As Parties slowly realize the potential of REDD-Plus likely emerging as the most accepted, advanced, and cost-effective model by 2020 for meeting emissions reduction commitments under a new climate regime, it remains to be seen if the ADP will steer discussions towards establishing stricter accounting rules or allow for an organic expansion of effort and collaboration between developed and developing countries towards “climate-effective” outcomes, or a complicated expression of both.

At this point, it would be very hard to speculate on this matter, pending discussions under the ADP, and not to mention the two huge elephants in the room: integrating or collapsing agriculture and REDD-Plus under LULUCF discussions under a new protocol, and treatment of REDD-Plus as an official flexible mechanism in a post-2020 regime. It would therefore be absolutely critical to kick-off Doha’s visioning process with a frank expression of views around the above topics.

As mentioned previously, while LULUCF may have won a small victory with its continuity into the second commitment period of the KP, its fate with regards to a new protocol in 2020 is, quite frankly, still anybody’s guess. This is so much more the case with agriculture per se, with some Parties feeling more comfortable folding it into LULUCF, or keeping separate to avoid “contamination”, or even strictly treating it as a driver of deforestation under REDD-Plus.

There are moves by several developed and developing countries alike to further close perceived loopholes in LULUCF and this involves calls to institute a comprehensive net- net accounting regime, or in other words, a mandatory accounting system for the whole land-use sector that includes emissions and removals from forest, cropland, grazing land, wetland, and peatland management. Under a new protocol, such a system would likely ensure the highest level of environmental integrity but would in turn require profound political will.

And on this note, we again speculate that before any of these issues become ripe for discussion with respect to a new protocol that is “applicable to all” (“but not uniform in application” as some countries are quick to add), the broader issue of how land-use activities, including REDD-Plus, are to be treated will first have to be clarified.

For instance, will LULUCF remain a mechanism for developed countries to meet emission reduction commitments? Which developed countries are eligible to access it as a flexible mechanism? Is LULUCF applicable to developing countries in terms of meeting NAMAs? Can LULUCF including agriculture be considered under new market mechanisms for developing country participation? How does REDD-Plus interface with LULUCF both as a potential NAMA and a flexible mechanism?

At this stage, we can only surmise that if a renewed focus on mitigation and financing is established under the ADP, that REDD-Plus, agriculture and LULUCF can become major elements of a “mitigation mechanisms” workstream that is closely tied to MRV, financing and new market mechanisms. Under this workstream, we can also go as far as to predict that Parties will work very hard to establish a “dynamic differentiation” between developed and developing countries on the applicability of accounting rules and financing modalities, while developed countries in particular will work very hard towards broadening the scope of and their access to potentially new flexible mechanisms established under this workstream.

The authors are affiliated with the Ateneo School of Government and have written this in that capacity and not as members of the Philippine Delegation to the UNFCCC negotiations. The support of the Climate and Land Use Alliance for preparing this update is also acknowledged but all responsibility for it is by the authors.

This article has been adapted from the working paper “The Road to Doha: The future of REDD-Plus, agriculture, and land-use change in the UNFCCC”, published by the Foundation for International Environmental Law and Development (FIELD) and available for download here. Please cite the original when referencing or sharing.