The US federal government has implemented a new scheme that pays private landowners to conserve species currently finding sanctuary on federal lands. Though similar to existing mitigation banking programs, critics say the new scheme lacks the controls needed to be effective. The Ecosystem Marketplace takes a hard look at the new market for Recovery Credits. 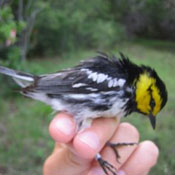 The US federal government has implemented a new scheme that pays private landowners to conserve species currently finding sanctuary on federal lands. Though similar to existing mitigation banking programs, critics say the new scheme lacks the controls needed to be effective. The Ecosystem Marketplace takes a hard look at the new market for Recovery Credits.

18 March 2008 | Peculiar as life has been for the golden-cheeked warbler, it recently may have become downright precarious. Singing its theme song, “buzz, lazy-dazy,” this endangered bird family inadvertently made its primary home in what later morphed into one of the largest heavy-artillery Army training sites in the United States in Fort Hood, Texas.

As bombs exploded and armored tanks scorched the earth across the 220,000-acre Army training base, the migratory songbird nested inside 66,000 bucolic acres the Army set aside for it as part of the Army’s responsibility under the Endangered Species Act.

But its lazy-dazy days of protection there are coming to a close. Fort Hood piloted a new protocol over the past year and a half called the “Recovery Crediting System“, which enables the federal government to shift its responsibility to adjacent private landowners – for a price.

The feds liken the scheme to existing mitigation banking projects, which make it possible for landowners to shift responsibility for species conservation among each other, thus enabling development while supporting endangered species.

Recovery crediting makes it easier for government agencies to shift their responsibilities to the private sector by engaging in a streamlined version of the practice – a move that could have major implications for conservation, because the federal government currently provides the nation’s largest protection for endangered species.

The feds argue that privatizing conservation in this way will promote efficient conservation, but critics say the streamlining has gone too far, and warn that a dearth of checks and balances makes it difficult to know if the species are actually being protected – hardly a recipe for a clear, transparent, and fair market.

Program supporters say the presence of endangered species should not hamstring government efforts to fulfill vital missions such as training men and women to defend their nation. “The army is in the business of managing endangered species land,” says Robert Wagner, PhD., a quantitative ecologist who provided consultation work for Fort Polk’s model program. “But it doesn’t want to be.”

“Recovery,” he says, “does not typically involve destruction. But this program enables the destruction of public lands that until now have protected endangered wildlife.”

Interviews with biologists that shepherded the recovery crediting system through – as well as stakeholders who could benefit from it and environmentalists evaluating it – paint a picture of a program rife with possibilities but short on accountability.

It could fork over a windfall of taxpayer dollars to lucky landowners living adjacent to federal lands, but it appears less likely to steer significant business to the conservation bankers whose expertise lies in brokering deals between land developers constrained by endangered species and the environmental organizations that protect them.

In terms of structure if not accountability, the recovery crediting system stands as the latest in a line of recent initiatives that encourage the private sector to help solve environmental problems that have long stymied government bureaucracies. It combines government oversight, financial incentives and private entrepreneurship to create a new environmental market whose goal is to protect a rare natural asset while freeing up valuable land.

This initiative was generally modeled after its slightly senior brother, conservation banking, and its older cousin, wetland mitigation banking.

Wetland mitigation banks date back to the early 1990s and are actual wetlands created, restored or enhanced by private companies or government agencies. Designed to comply with the federal Clean Water Act’s mandate of no net loss of wetlands, these banks allow developers to buy credits from wetland banks to replace marshes they destroy on private land.

Similarly, conservation banks, which began in the mid 1990s, allow developers to fulfill requirements under the Endangered Species Act to mitigate the effect their projects have on sensitive privately-owned land by purchasing “credits” at off-site locations where similar habitat is preserved in perpetuity.

The Logic behind Recovery Credits

Since 73 percent of the land in the contiguous United States is privately-owned according to the latest government figures, it appears sensible to enlist private landowners as partners in conservation by making it practical and financially viable.

The novelty of the proposed recovery crediting program is that it fosters this type of trade-off for at-risk-species on federal rather than private landholdings. Section 7 of the Endangered Species Act requires federal agencies to protect threatened and endangered species and ensure that their actions do not jeopardize listed species or destroy or adversely modify critical habitat. This has generally been interpreted to mean that the federal government protects endangered species on its own land where the species reside, as the Army had done in Fort Hood.

The new recovery crediting system will offer federal agencies such as the Army flexibility to offset the impact of their actions on threatened and endangered species found on federal lands by undertaking short-term or permanent conservation actions on non-federal lands, says Fish and Wildlife Service (FWS) spokesperson Valerie Fellows.

As the private sector does with wetland trading and conservation banking, Federal agencies can use the recovery crediting system to create a “bank” of credits accrued through beneficial conservation actions undertaken on non-federal lands. A federal agency can develop and store these conservation credits for use at a later time to offset the impacts of its actions on federal lands. Credits must be used to benefit the same species for which they were accrued.

In the pilot recovery crediting system tested at Fort Hood in Texas, the US Army funded habitat conservation and restoration projects for endangered golden-cheeked warblers with willing landowners on more than seven thousand acres of private land surrounding the military base. The FWS worked with the Department of Defense, the Texas State Department of Agriculture and other agencies.

“We’ll consult and ensure that the program is not likely to cause jeopardy and ensure that it provides a net benefit to the species,” says John Fay, an FWS biologist who shepherded the pilot program through the assessment process.

“Whether a program like this is good or bad is largely dependent on how it is implemented,” says Robert Wagner, who provided consultation work for the model program at Fort Polk.

But under the program’s current design, say environmentalists as well as some conservation bankers set to profit from it, essential oversight needed to make the program an environmental and market success appears lacking.

“I have no doubt that there’s a potential market here,” says Wayne White, a retired FWS field supervisor and current project leader for Wildlands, Inc., one of the largest conservation banking businesses in the nation. “The disconnect is that the government is establishing credits similar to conservation banking while using an absolutely different and very weak standard…that undercuts real conservation.”

The differences between conservation banking and the new recovery crediting system are far greater, he added, than the distinction that the former involves private land while the latter involves land that is publicly-owned. Management and monitoring plans designating specific outcomes are required under conservation banking. The same degree of management accountability is not required under the recovery crediting program.

Another difference is that conservation banks provide non-wasting endowments to cover any future or unforeseen expenses. This type of future financial obligation is not spelled out under the recovery crediting program and could prove difficult due to the strain under which state and federal budgets operate.

Finally, conservation banks typically turn adapted properties over to environmental groups and other third parties for long-term monitoring and upkeep. In contrast, private landowners participating in the recovery crediting program retain control of their properties even though they may have limited experience and expertise in protecting endangered species.

“This is like letting the fox into the chicken coup,” White says.

White and Suckling stand among approximately 100 stakeholders who filed comments evaluating the new recovery crediting system. Despite their concerns, the recovery crediting program has jumped hurdles that might otherwise slow down a proposal with implications this great. The U.S. Fish and Wildlife Service began piloting the program in Fort Hood in late 2006, says Wagner. It solicited public comment on November 2, 2007, and closed the comment period the following month.

Environmentalists complain that it is virtually impossible to assess the Fort Hood program’s degree of success because the FWS signed the conservation agreement under Texas state law, which offers unusually strong protection for private landowners, including strict confidentiality agreements.

Specifically, the Texas Parks and Wildlife Code, Section 12.0251, “prohibits (it) from disclosing certain information related to the location, species identification or quantity of animal or plant life located on privately owned land that is subject 5 to a Wildlife Management Plan.” In other words, information cannot be disclosed that would fully assess whether golden-cheeked warblers are thriving on land where recovery credits have been paid out.

“Why all these evasive maneuvers and secrecy if this is actually a beneficial program?” Suckling asks.

Nonetheless, Fay says he expects to see the new program up and running by June. By characterizing the recovery crediting system as “guidance” that does no more than offer an interpretation of Section 7 of the Endangered Species Act, “it doesn’t break new ground; it’s just a novel application” Fay says. “So it’s a done deal.”

“There is no doubt that there is a potential market (for this program),” says White. “I just hope that they’ll be smart enough to raise its criteria to the elevation of conservation banking.”