Peru needs at least a year to formulate its strategy for conserving forests in the fight against climate change, but a major highway project is set to slice into the heart of the country’s share of the Amazon today.  Private companies and environmental groups have responded with an accounting scheme designed to get carbon money flowing to protection long before a national scheme is in place. 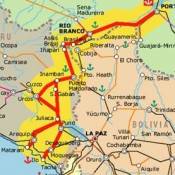 11 August 2010 | LIMA, Peru| South America’s Southern Interoceanic Highway links 2,603 kilometers of new and old roads stretching from the Brazilian Amazon to the coast of Peru.   Heralded as a much-needed link to connect some of the more remote areas of Peru to population centers, it is also feared as the kind of venture that could spark runaway development in the vast swathes of megadiverse tropical rainforest of Madre de Dios, a remote province in southeastern Peru.

That threat, however, may now be mitigated by the potential for payments for REDD (reduced emissions from deforestation and degradation) allowing companies and environmental groups to fund forest conservation by earning carbon credits for saving trees.

“Yes, the Interoceanica is a threat,” says Augusto Mulanovich, of the Association for the Conservation of the Amazon Basin, the nonprofit administering the Los Amigos Conservation Concession. “But it is also an opportunity.”

But as early REDD projects scramble to get off the drawing board and, initially at least, into the voluntary carbon market, they also face a major challenge; the Peruvian government is still an estimated two years away from finalizing the country’s national REDD framework. The risk is that these projects could be punished for their early success through discrepancies with an eventual national REDD methodology.

As a result, they could be deemed to be facilitating less avoided deforestation than first calculated, or even to have collectively failed to prevent “leakage”, as the lack of a strategic, targeted REDD network results in deforestation prevented in one place simply moving elsewhere. Either way, the projects could lose many of the carbon offsets they hope to market.

The good news is that the government appears to be listening. Augusto Castro, a REDD specialist at Peru’s Environment Ministry, says the government is clearly moving towards some form of the “Nested Approach”, an innovative framework that allows for sub-national   systems within national REDD schemes, combining the best of both approaches without threatening incentives for individual project developers who are already reducing forest carbon emissions.

Under the Nested Approach, REDD payments can be made directly to national governments but also, in parallel, sub-nationally, both to local governments and to individual project developers. All payments are, however, predicated on countries meeting their national targets.   This approach presents significant downsides for individual projects which risk losing REDD payments through no fault of their own should national REDD targets be missed.

In a country like Peru, where weary distrust of the state is deeply entrenched, a way will have to be found around that huge roadblock. In a recent study by The Nature Conservancy and Baker & McKenzie, “A Nested Approach to REDD+” proposed solutions include project insurance and a REDD reserve fund that could be dipped into as necessary to reward successful projects in countries which have been unable to halt net deforestation.

According to Lucio Pedroni, CEO of Carbon Decisions, a Costa Rica-based consultancy working with Peru’s Environment Ministry, the government is planning on building its REDD methodology upwards and downwards from the regions, potentially using the framework adopted by Madre de Dios’ regional government or another region as the basis for the national carbon stocks and emissions accounting systems.

“It is extremely important that the process is transparent to encourage projects to join,” he warns.

As a stepping stone towards participation in eventual international compliance markets, many of the Peruvian REDD projects are initially aiming to have their carbon sequestration validated under the Voluntary Carbon Standard (VCS) and their added benefits validated under the Climate, Community and Biodiversity Project Design Standards (CCB), although some have been considering other methodologies. The danger of an emerging patchwork of REDD projects, each using its own baseline and methodology, is being kept at bay through regional and national REDD roundtables, bringing together project developers and regional and national governments.

The Madre de Dios roundtable has divided up responsibilities among its members for research into accounting methods and standards. Its input is expected to be pivotal in the regional government’s eventual REDD approach.

And in another Amazonian region of Peru, San Martí­n, with the highest historical rates of deforestation in the country, the regional government and a variety of NGOs are working together in a regional roundtable and in developing a shared regional baseline.

“By developing a shared information infrastructure for baselines and project accounting, San Martin should be able to produce more credible REDD credits, and bring down the costs for organizations and communities wanting to develop projects,” says Jacob Olander, Director of the Katoomba Incubator, who has been active in supporting this effort.

Likewise, selected members of the national REDD group, from both NGOs and private developers, formed a technical group which played a major role in helping Peru’s Environment Ministry draw up its Readiness Preparation Proposal submitted to the Forest Carbon Partnership Facility. The document sets out the process and goals, including heavy liaison between project developers and the government, for Peru to finalize its national REDD strategy, which Castro expects to take another 24 months. One of the first steps will be to update the satellite mapping of the quality and state of Peru’s rainforests, a process which has not taken place for 10 years.

The Environment Ministry wants to incorporate REDD into a broader conservation strategy that will cover 54 million of Peru’s estimated 64 million hectares of rainforest, with a final goal of eliminating all emissions from deforestation and degradation from the protected areas.

Despite the teamwork, there is concern about the potential for leakage from the first generation of REDD projects. “Leakage is always a big issue when you are talking about individual REDD projects rather than a national REDD scheme,” warns Sandra Brown, Director and Chief Scientist at Winrock International’s Ecosystems Services Unit.

However, Gonzalo Castro de la Mata, Executive Vice Chairman of Bosques Amazonicos, a Peruvian company with four REDD projects in Madre de Dios, including Los Amigos, which it finances, says leakage is not a major issue for projects along the Southern Interoceanic. Any leakage would have to have the same deforestation driver, namely the highway, and would by definition have to crop up elsewhere along it, he notes. Yet all the unprotected forest along the road is expected to be deforested anyway.

More generally, with limited large-scale agriculture in the Peruvian Amazon so far, arguably the biggest deforestation threat comes from colonization by Andean migrants with little or no knowledge of sustainable tropical horticulture and who can have devastating ecological impacts. The consensus seems to be that leakage from them is unlikely to travel far and can be reduced by working with communities to develop new sources of income based on sustainable exploitation of the forests.

“It is not about building a barrier and stopping people coming into the protected area but addressing the drivers of deforestation by working with communities to create alternative livelihoods,” says Toby Janson-Smith, Senior Director for Climate and Land Use: Markets and Policy at Conservation International’s Center for Environmental Leadership in Business. “You don’t start on a project unless you can tackle these drivers. It doesn’t make sense to put all those resources into a project that is not viable.”

And although Carbon Decision’s Pedroni is clear that the government needs to move fast to direct future projects towards deforestation hotspots, he also insists that the first crop of REDD projects should not be forced to wait months or years until the national government completes its REDD strategy. “I would prefer to have 100 projects happening but with maybe a few not being pure and having leakage than only have five projects happening,” he adds.

But as the REDD rubber hits the road in Peru a major question mark hangs over the participation of indigenous communities.

In May, AIDESEP, the largest organization representing the Peruvian Amazon’s native peoples, issued a position statement vehemently opposed to market mechanisms and, in particular, outsiders profiting from rainforest conservation. That development surprised few observers given the highly-politicized backdrop of the government’s push to exploit the Amazon’s natural resources and perceived tendency to ride roughshod over social concerns, which reached a nadir in May 2009 with the Bagua massacre.

Nevertheless, AIDESEP is a long way from representing all of the Peruvian Amazon’s native inhabitants. There was strong indigenous attendance at a payment for ecosystems services workshop for community leaders organized by Forest Trends in May in Puerto Maldonado, the capital of Madre de Dios.

Indeed, one of the main challenges for project developers looking to work with indigenous peoples may be to manage expectations, with some communities having unrealistic ideas about the sums on offer for forest carbon. According to Beto Borges, who attended that workshop as Director of Communities and Markets at Forest Trends, most communities will need to partner with well-resourced NGOs or commercial developers to have any chance of accessing the necessary legal and technical expertise not to mention the six figure sums required to launch REDD projects. “It is very difficult for them but the interest is there,” he says.

Jorge Torres, Technical Director of Bosques Amazonicos, believes that AIDESEP may not fully understand that REDD is still a work in progress and potentially could be highly beneficial to indigenous peoples: “REDD as a sub-national project will give rights to natives. When we have meetings with indigenous peoples we try to explain that REDD is many things.”

For now though, indigenous involvement remains one of many missing pieces in the jigsaw that will have to be fitted together as Peru’s REDD boom matures. And as the national government scrambles to catch up with projects on the ground, some version of the Nested Approach increasingly looks like the best bet to square the circle of incorporating early initiatives into a national REDD set up without punishing them for their success.

Simeon Tegel is an environmentalist and journalist based in Peru. He can be reached at [email protected]
Please see our Reprint   Guidelines for details on republishing our articles.