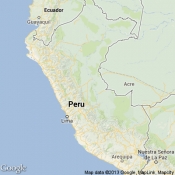 This article was originally published in Spanish by the Climate and Development Knowledge Network (CDKN). Click here to view the original.

2 July 2013 | The Ministry of Environment of Peru (MINAM) received the news that Peru will host the 20th session of the Conference of the Parties (COP) to the UNFCCC (United Nations Framework Convention on Climate Change) in 2014 with optimism and expectation. The department believes this meeting (where more than 190 countries of the world will convene) represents a step towards a 2015 global agreement with concrete and binding commitments to address the impacts of climate change.

“Peru is a country absolutely committed to the negotiations and its progress in dealing with climate change. We are committed to the Durban Platform agreement and we know that in Warsaw 2013, Lima 2014 and Paris 2015 we will come to a binding climate agreement, for the planet, for the people and for our citizens. Those of us who serve the public are aware that our fundamental priority is our people, especially the most vulnerable-those who suffer the consequences of climate change,” says Manuel Pulgar-Vidal, Minister of Environment, in a speech he delivered at a Climate Conference in Bonn.

According to Pulgar-Vidal, choosing Peru to host COP 20 is a sign of recognition from the world that Peru is a country committed to the wellbeing of its people as well as development based on low carbon emissions.

The importance of achieving a binding global agreement under the principals of “common but differentiated responsibilities and respective capacities,” following the outlines of the Durban Platform, is an important issue for Eduardo Durand, Director of Climate Change, Desertification and Hydric Resources for MINAM. He says that while there are countries like Peru, who has voluntarily committed to reduce emissions, other nations have not and continue to generate unchecked emissions. Those are the places Durand aims to influence.

To do this, Chile, Colombia, Costa Rica, Panama, Guatemala and Peru will work together to enforce recognition and implementation of the Durban Platform while fighting “hard positions” that impede global agreements. This group of Latin American countries will work to build bridges between the different positions and interests of diverse countries.

Another issue important to developing countries is adaptation to climate change. Little emphasis has been put on it in past negotiations amounting to little advancement made in the sector, especially when compared to mitigation efforts.

Pedro Solano, Executive Director of the Peruvian Society of Environmental Law (SPDA), considers creating a climate change adaptation strategy based on ecosystems and environmental compensation, sustained by natural infrastructure, an essential part of the negotiations.

“It is hoped that at a national level there is a priority given to the management of woods and meeting the zero deforestation goal, coupled with updating binding concepts such as the role of the protected areas on climate change issues and the actual internalization of an oceanic strategy for the sustainable provision of food,” he says.

Solano also will be pushing the issue of preserving glaciers at a regional and national level over the next 40 years.

The Fundamental Role of Civil Society

The participation of civil society organizations in previous conferences has been fundamental to position key themes and promote the importance of the agreements generating at the same time a healthy alternative and complementary vision, which is no mean feat. The role of civil society organizations, according to Solano, is “to generate and share information, such as establishing spaces for previous dialogues to aid decision making, and also to monitor and advise the coherence of the party’s positions.” Civil society participation is essential to the transparency of the process and its legitimacy, Solano says.

The G8 summit meeting in Northern Ireland recently finished culminating with the Lough Erne Declaration. In the document, countries recognize that climate change increases economic risk and global insecurity and encourages them to work together at the UNFCCC to achieve a new protocol by 2015.

Next year, the IPCC (Intergovernmental Panel on Climate Change) will release its latest report-Fifth Evaluation Report-an update on scientific, technical and socio-economic data regarding climate change. This report presents the current situation and provides guidelines on measures to curbing climate change in the future.

Finally, we have to remember that BanKi-Moon announced at Doha his intention to convene a meeting of leaders in 2014 to hold the world’s attention on climate change.