Linwood Pendleton, the Director of Ocean and Coastal Policy at Duke University, recently answered questions on marine and coastal ecosystem services during an interactive ‘Office Hour’ online chat. The questions were wide-ranging, but Pendleton focused on connecting with decision makers through relevant high quality data that is easily communicated. 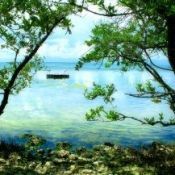 Linwood Pendleton, the Director of Ocean and Coastal Policy at Duke University, recently answered questions on marine and coastal ecosystem services during an interactive ‘Office Hour’ online chat. The questions were wide-ranging, but Pendleton focused on connecting with decision makers through relevant high quality data that is easily communicated.

5 November 2013 | As Director of Ocean and Coastal Policy at Duke University’s Nicholas Institute for Environmental Policy Solutions and manager of the Marine Ecosystem Services Partnership, Linwood Pendleton has been able to view his watery landscape both deeply and widely. Early last month, he engaged in an online “Office Hour” chat with members of the marine ecosystem community, and offered his insights into the science, the politics, and the economics of developing results-based financing for oceans.

The greatest challenge, he says, isn’t the research, but the communication of that research. Research needs to be communicated in such a way that it causes real political action as well as unleash funding for the right type of research that will generate results. He cautioned against spending excessive amounts of time and money on models and data that decision makers, institutions and individuals don’t relate to or trust. Instead, he said, researchers need to identify specific data relevant to marine policy to make it clear to all what we do and don’t know, and then make the case for moving forward. This basic understanding can be built on and then used to analyze how human activities impact the environment. Deciphering the factors that inhibit ecosystem services thinking is another element that deserves more thought and time.

“If the quantification of ecosystem services doesn’t change behavior, then why do it,” Pendleton says.

Pendleton stressed identifying decision makers and to use information that would relate to or impact their interests. The first thing I do when contemplating a valuation study is to ask- ‘Who am I communicating this information to and what are they going to do with it?’ he says.

Figuring out just how to communicate the ecosystem services concept to different actors is tricky. A report by the non-profit research organization, the Institute for Sustainable Development and International Relations (IDDRI), found that just 2% of ecosystem services valuations actually influenced policy in recent years. The possibility that valuation studies don’t generate the expected results isn’t popular thought but it seems Pendleton agrees, at least, to a certain extent. He discusses how using the term, ‘ecosystem services,’ and placing a value on them would seemingly relay the message to the business community. That way companies would be able to measure the risk as well as understand their dependence on the environment in order to conduct business. But Pendleton argues it doesn’t always work. In some cases, the services measured, such as lives protected or saved with ecosystem services- don’t help the business community understand their own reliance on these services.

“In much of the rush to valuation, I think we naively believed that putting a monetary value on all types of ecosystem services would make them more understandable to business types,” Pendleton says.

Some companies are more likely to respond when revenues or local jobs are factored in, he says, which is just another reason to focus in on decision makers’ specific interests.

Others argue the term, ‘ecosystem services,’ puts too much of an emphasis on nature’s economic importance. Recreational services, like wildlife viewing or surfing, are harder to quantify in monetary terms than hunting or fishing because they don’t generate as many obvious financial benefits. But they do generate benefits, Pendleton says. A study he was involved with showed how surfing contributes significantly to California’s economy.

Benefitting from ecosystem services is a wide topic and one that was touched on during the conversation. Where an ecosystem service is produced tells us almost nothing of who benefits from it, Pendleton says. Marine ecosystems need to be linked not only to the users within the ecosystems but also to users in other locations. Pendleton uses the example of the Sargasso Sea in the Atlantic Ocean. It provides critical habitat for turtles and other species as well as local fishing activities. It also is the only spawning site for several species including the endangered eel that populate Europe and America’s east coast and serve as food, bait and fish food.

Benefits in the form of payments for ecosystem services (PES) is another important aspect of valuing marine ecosystem services, especially since coastal environments are often forced to decide between economic development and conservation. PES can prevent this by providing payments for maintaining environmental quality. A growing understanding of blue carbon is also helping to maintain marine ecosystems through payment schemes that keep carbon in the soils of seagrasses, mangrove forests and salt marshes.

PES mechanisms could also include payments for those upstream caring for the watershed. The ecosystems must be healthy in order to store carbon so invested stakeholders may be willing to include upstream caretakers in the payment deal. Those invested in blue carbonwould pay farmers to sustainably care for the land and watershed.

Instruments for evaluating marine services were another popular topic. As mentioned, data collection plays a fundamental role in how these ecosystem services are presented to different actors. Pendleton points out the importance of using the right tools for the specific question at hand. Don’t change the question so it fits with the data available, he says. Modeling tools that allow one ecosystem service to be changed independently of others in the same ecosystem can also cause problems because it doesn’t reflect reality. Ecosystem services are produced jointly and therefore dependent on each other, Pendleton says.

Emerging tools include a valuation kit created by non-profit Earth Economics, which quantifies the goods and services of regional ecosystems. There is also InVEST, which is a set of software models that map and value ecosystem services. It’s similar to MIMES (multi-scale integrated models of ecosystem services), another suite of models that can measure the effects of land and sea-use change on the environment.

Determining the best method to use to value Marine Protected Areas (MPAs) is all about data collection, Pendleton says, and not as much about a specific tool or a combination of tools. As of now, not enough research is done regarding MPAs. The best way to demonstrate that MPAs bring economic and ecological benefits is by gathering data before and after implementation of the MPA and then during the many different management approaches that are attempted. This will show how the different management activities affect the ecosystem and the local populations.

In terms of databases on valuation services, Pendleton listed several including NOEP (National Oceans Economics Program), Gecoserv and Earth Economics. There will soon be a database at IPBES (Intergovernmental Platform on Biodiversity and Ecosystem Services) as well, he says.

“What marine policies right now cry out for is better information on ecosystem services,” says Pendleton.

And better communication with the information it has. Pendleton believes comprehensive integrated human and ecological research sites could demonstrate the cause and effect of human impacts on ecosystem services.

Pendleton says, “we spend far too much time modeling hypothetical ecosystem service outcomes, producing models that no one believes.”