In a major demonstration of confidence in the viability of voluntary carbon offsets as a strategic investment, Merrill Lynch is raising equity for a 100-million-ton, for-profit avoided deforestation project in Aceh, Indonesia. Tellingly for the future of the forestry market, the decision to take the plunge had more to do with the cultural and biodiversity benefits than with the carbon itself. The Ecosystem Marketplace examines the deal and its significance. 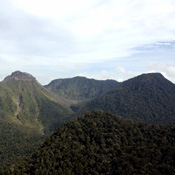 In a major demonstration of confidence in the viability of voluntary carbon offsets as a strategic investment, Merrill Lynch is raising equity for a 100-million-ton, for-profit avoided deforestation project in Aceh, Indonesia. Tellingly for the future of the forestry market, the decision to take the plunge had more to do with the cultural and biodiversity benefits than with the carbon itself. The Ecosystem Marketplace examines the deal and its significance.

8 February 2008 | “Pre-Bali, no one wanted to touch avoided deforestation,” says Dorjee Sun, CEO of Australian project developer Carbon Conservation. “Now people are starting to recognize AD as the next big thing, and they are looking for ways to participate with an edge.”

On Thursday, Carbon Conservation and Merrill Lynch confirmed that the investment bank will be offering its retail and commercial clients voluntary carbon credits from a massive Indonesian AD project that could yield up to 100 million metric tonnes of offsets over 30 years.

To put this number into context, Ecosystem Marketplace tracked just over 24 million tons of voluntary credits transacted in 2006.

More importantly, says Sun, the project is part of a larger scheme to build Aceh’s economy along what he calls a “Green Paradigm” incorporating not only culture and biodiversity standards attached to the carbon, but also sustainable agriculture.

Coffee and the Economic Ecosystem

The longer-term plan involves new financing mechanisms designed to jump-start the cultivation of sustainable palm oil, coffee, and cocoa, which will then be marketed under the brand name “Aceh Green.” It is this later phase, details of which are still to be announced, that convinced Merrill to take the plunge, according to Abyd Kamali, the bank’s Global Head of Carbon Emissions.

“The overall approach being proposed in Aceh is truly innovative and reflective of the need for forestry, carbon, and softs to be treated as one economic ecosystem,” he said.

Both the future green commodity project and the current carbon project are centered on 750,000 hectares of the Ulu Masen Ecosystem. (For a detailed examination of the project and the challenges of implementing it, see It’s Not Easy Being Green in Aceh, Indonesia).

Carbon Conservation began developing the project together with Fauna & Flora International and the government of Aceh Province in February, 2007. One year later, on February 6, 2008, the project became the first forest conservation project to achieve Climate Community and Biodiversity (CCB) certification when the Rainforest Alliance SmartWood Program signed off on it.

“I can’t emphasize enough the significance of being approved by SmartWood,” says Sun. “Jeffrey Hayward raked us back and forth over the coals until he was convinced that we could implement the plan as presented, for the money budgeted, and in the time allotted.”

The Economics of Quality

Sun is banking on the idea that the extra money spent on preserving biodiversity and supporting the local economy will pay off in spades when it’s time to get the emission reductions certified – and the resulting certificates sold.

Both he and Karmali say the project wouldn’t have happened without strong local support, and they give credit for that to Aceh Governor Irwandi Yusuf, who Karmali first met in September. “Meeting the Governor of Aceh, as well as the other stakeholders involved in the project, left a strong impression about the collaborative approach that has been employed – and the strong buy-in from all stakeholders on this project,” he says.

Local buy-in, however, wasn’t a foregone conclusion, and the next five years will be critical in maintaining it. That is the time over which the first $48 million will be spent – more than half on economic development in local villages.

“Deforestation isn’t caused by big companies coming in and chopping down trees,” says David Pearse, who is overseeing the land use aspect of the project for Carbon Conservation. “It’s caused by local people having no other source of income than the forests.”

“Aceh still has standing forests because of the war between the Aceh rebels and the Indonesian government,” adds Sun. “Now that they have peace, illegal deforestation has started going rampant. The governor understood the loose structure of carbon credits, and tied it into a moratorium on logging.”

Sun says he expects the first tranche sold through Merrill Lynch to bring in $5 to $10 per tonne of CO2 sequestered, which is a slight premium to the price of voluntary allowances trading on the Chicago Climate Exchange.

Over time, however, he believes the social benefits of the project will boost the prices of his credits to a level more in line with those of the compliance market – especially if avoided deforestation becomes a recognized offset vehicle for carbon emissions in a post-Kyoto world.

“If we monitor our vintages right, we will be on the right track for compliance credits, and will be pushing a compliance price,” he says. “In the meantime, people will be looking at prices of carbon under the European Union Allowance (EUA) scheme, and then looking at voluntary methods, and they will realize that projects that can show additional benefits are worth paying extra for.”

The challenge now, of course, is to actually deliver. “This is only the first step,” says Governor Irwandi. “The hard work will be in financing and implementing our proposed project to help preserve the largest remaining bloc of unprotected Sumatran forests.”

Steve Zwick is managing editor of the Ecosystem Marketplace. He may be reached at steve.zwick@gmail.com.