Industrial logging, tree farming, and clear-cutting have altered some of North America’s most prized forests.  Oregon’s Ecotrust aims to reverse that trend by harvesting trees more selectively and using carbon credits to make up for lost income.  In the process, they’re testing the limits of new tools that California has developed to keep the system honest. 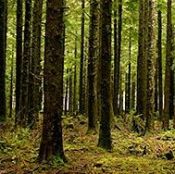 Industrial logging, tree farming, and clear-cutting have altered some of North America’s most prized forests.   Oregon’s Ecotrust aims to reverse that trend by harvesting trees more selectively and using carbon credits to make up for lost income.   In the process, they’re testing the limits of new tools that California has developed to keep the system honest.

26 March 2010 | For more than 3500 years, the Makah people of the Pacific Northwest near the US-Canada border built their homes, halls, and fishing boats from the bark and timber of the western red cedar.   This slow-growing cypress thrives in the so-called “riparian zones” where water gives way to land, and the tree yields a resilient wood that’s ideal for everything from totem poles to sundecks.   It provided a foundation for the Makah culture – and a valuable target for loggers working to feed the post-war 1950s building boom.

Unfortunately, the western red cedar failed to attract the interest of plantation owners who might have re-planted the trees on a meaningful scale – largely because it needs 60 or 70 years before hitting its stride.   As a result, this once-dominant breed has given way to faster-growing species across much of the Pacific Northwest, making it – along with the spotted owl – both a symbol of the dramatic environmental changes following in the wake of industrial forestry and a bellwether of the degree to which ecosystems have been degraded.

“We are attempting a very different approach to forest management – managing for long term value and the full array of forest products and services – timber, carbon, habitat, recreational values, scenic values, and job creation – rather than just intensive timber production” says Bettina von Hagen, President of Oregon-based Ecotrust Forest Management.   “We think this better serves both the investor and the forest, and ultimately creates a much more robust and resilient forest products industry” .

That’s where her company comes in.   Ecotrust Forest Management is a for-profit enterprise that’s jointly owned by non-profit Ecotrust to manage a forestland investment fund, Ecotrust Forests LLC, on behalf of private-equity investors and foundations.   It aims to make money by purchasing industrial tree plantations that have been clear-cut or over-harvested and then selectively harvesting,   leaving the more desirable trees to grow and add value. .

“This means cutting less than the previous owners did, especially in the first ten years,” says von Hagen.   “But over the long term we believe our management style yields higher value   than the standard industrial approach, because the older trees produce higher quality timber, and more of it,   and the forest delivers better carbon storage, habitat, and water quality.

To get through those early years she hopes to earn credit for the carbon sequestered in the long-lived western red cedar as well as in other species indigenous to the Pacific Northwest such as Douglas fir, Sitka spruce, and western hemlock.   In the near term, she is also taking advantage of new-market tax credits offered to entities that start new businesses in economically-depressed regions.

Last week, her company announced the first sale of carbon credits from one of their properties and said it would use protocols developed in California for measuring and monitoring carbon captured through a practice known as Improved Forestry Management (IFM).   This marks the first time these specific protocols are being used outside of California.

Under terms made public last week, Ecotrust contracted to sell an undisclosed number of carbon credits generated from a 3,276-acre industrial tree plantation they purchased in the Olympic Peninsula in 2005.   The buyer is the Eco Products Fund (EPF), which is a private equity vehicle co-managed by New York-based Equator LLC and Sydney-based New Forests.   The project is expected to generate hundreds of thousands of carbon-reduction credits (CRTs) over a 100-year lifespan.

Ecotrust Forests LLC purchased the property, known as the Sooes tract, in late 2005 with the backing of several investors looking for long-term value from timber, tax credits and carbon income.

“If this management model works, we’ll be able to deliver ecosystem values and social values while turning a profit,” she says.   “In fact, the way it looks now, we’ll be creating twice as many jobs per thousand of board feet of timber harvested as you get with standard industrial forestry, because it’s a lot more labor to plan for and selectively log a forest than it is to clear-cut one.”

And, she hopes, if her company turns a profit, others will follow suit.

“That’s necessary if we’re to achieve the kind of scale necessary to really make a difference,” she says.

IFM is not for the get-rich-quick set.   It requires careful monitoring of forests, long-term planning, the culling of undesirable trees, and the nurturing of vegetation along a water’s edge to improve water quality.

Managed forests are divided into “stands”, which are clusters of trees managed as a unit.   On tree farms, stands are usually comprised of similar trees, but natural forests don’t evolve that way.   Some trees – like the western cedar – grow in the shade of larger ones and can’t be grown in homogenous stands.

“You want to create a stand that has a number of different layers,” says von Hagen.   “You need a canopy layer, an emergent layer, and a shrub layer; IFM is about setting up processes that will result in those changes.”

All of these procedures make IFM more labor-intensive than industrial forestry, and the work also tends to be more consistent over time because it requires people to enter the forest more frequently instead of just during a final harvest.

Such procedures also open the door to other payments for ecosystem services, although these are not currently planned for the Sooes project.

“The potential for biodiversity credits is low there, because there just isn’t that much development in the region that would lead to mitigation opportunities,” says von Hagen.   “But some of our forests are close to municipal watersheds, so there are opportunities for water quality credits associated with them, and this is certainly an area we will be exploring in future acquisitions.”

Keeping it Honest: the Protocol

The credits will be generated under the new Forest Project Protocol (FPP) created by California’s Climate Action Reserve (CAR), which is competing with the Voluntary Carbon Standard (VCS) to become the blue-chip stamp of approval for voluntary carbon credits – and perhaps for compliance credits – in the United States.

Ecotrust has been working with the VCS Association to develop IFM protocols, but went with CAR for a simple reason.

“They got there first,” says von Hagen, referring to CAR’s October release of its FPP.

“We’re investing our intellectual capital and our systems in these protocols, and right now I would say that both protocols are worthy of investment,” she says, adding that both will likely find their niche in a market comprised of diverse landscapes and diverse demands on land.   “It’s good to have both protocols in hand, because different projects will yield different results and it’s helpful to have both.”

Ecotrust is now reaching out to land-owners to make them aware of the potential income stream available to them.

Among those neighbors are the Makah, whose reservation borders the Soes tract.

“We work fairly closely with them, and we share similar management styles,” she says.   “They’ve long managed their forest for the whole host of ecosystem services and products, as well as for cultural resources, and that’s what we’re trying to do.”

Steve Zwick is Managing Editor of the Ecosystem Marketplace. He can be reached at [email protected]e.com.