While bad actors that knowingly destroy critical ecosystems are fined by the US Environmental Protection Agency, these fines don’t carry as much weight as one might think, says William Coleman, a specialist in ecological asset development. Here, he explains why regulatory violations should reflect the price of mitigation. 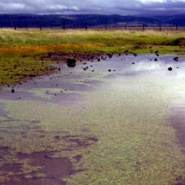 5 December 2014 | Last month, the U.S. EPA (Environmental Protection Agency) announced its intention to levy penalties in the case of a California central valley almond farmer who seems to have knowingly bulldozed 33 acres of rare vernal pool habitat in an effort to expand his orchard operations.

My guess is that farmer Edward Brown is crying about the EPA action…all the way to the bank.

The quick story is this: Brown leased 850 acres of land he thought suitable for planting almond trees. But the U.S. Army Corps of Engineers (Corps), the agency charged with preventing loss of wetlands, warned Brown that he needed a permit to ‘deep rip’ the ground on a portion of the 850 acre parcel. Brown ignored the Corps’ warning and went ahead with efforts to drag a six-foot deep metal shank thru the soil to prepare it for planting trees.

Learning of this new development, the agencies went to stop the earthmoving in time to find that 33 acres of vernal pool habitat had been ‘filled and obliterated’.

Vernal pools are unique to California. They are shallow, clay-bottom depressions that come to life during California’s rainy season with a variety of plant and animal life unlike anything else. These seasonal wetland pools are home to several threatened or endangered species, including three varieties of tiny ‘fairy shrimp’. They are part-and-parcel of the unique biodiversity that is native to California, supporting the state’s complex mix of ecosystem services.

Ecosystem services are like factory outputs. They are the processes, the infrastructure, supporting economic productivity and quality of life concerns. Eco-services generate everything from fertile soils to systems that purify air and water. But the efficiency of these services depends on a mix of animal and plant species that contribute to regional ecosystem functions. For the ecological factory to work at top efficiency, all the parts have be in place doing what they do. Vernal pool species are part of the mix.

Compensatory mitigation is required when impacts occur to wetlands. This has been true since the mid- 1980s. Compensatory mitigation credits can be purchased from permitted sellers to offset these impacts. Credit prices are subject to market forces – they are priced according to supply and demand. Because vernal pools are so rare, mitigation credits for vernal pool impacts are expensive, ranging from $200,000 to $300,000 per credit in today’s market, based on information available in the public record. This explains why Brown decided to take his chances with plowing under 33 acres of vernal pool habitat.

This also explains why the EPA enforcement action is woefully inadequate.

EPA decided to levy a $160,000 penalty for violating the regulations protecting wetlands and vernal pools. EPA also required Brown to purchase $1 million worth of mitigation credits from a nearby ranch who happened to have vernal pool acreage that could be protected to offset the losses attributed to Brown.

If we run the numbers according to current market prices for vernal pool credits, we can see that Farmer Brown has won the day. The EPA penalties will cost him $1.2 million in round numbers. If he had done as the Corps directed and bought 33 mitigation credits priced at $200-300,000 each, he would have spent $7-$10 million. By violating the law, destroying the habitat and subjecting himself to EPA justice, Brown has saved something like $7 million.

To the Modesto Bee and the SF Examiner, a $1.2 million penalty sounds like a lot. It sounds so large that other landowners would be discouraged from ignoring the agency warnings and doing what Brown did. And the penalty should have accomplished just that. In truth, the agencies badly underpriced the penalty. EPA must not have known what vernal pool credits are worth on the open market. If the agency did know, they certainly they would have thought twice about the message this inadequate penalty would send.

The net effect of this decision is to encourage other farmers to follow Brown’s lead; to violate the law, ignore the agency’s warnings and plow under rare habitat that contributes to the state’s environmental quality and economic success.

EPA and other agencies deserve to understand more about the comparative impact of enforcement decisions like this one. They need to make better decisions about mitigation-related penalties that will encourage compliance as opposed to motivating future violations of federal and state laws.

William G. Coleman has 40 years’ experience in environmental and sustainability management, specializing in ecological asset development and market management for agri-business and energy companies. He currently teaches global change and sustainability topics at UC Berkeley Extension and manages his own consulting enterprise, Eco-Asset Solutions Inc. in the San Francisco area. He can be reached at [email protected]