California regulators charged with ensuring the integrity of the state’s cap-and-trade program are reviewing emissions reductions generated at an Arkansas facility that may have been in violation of its federal permit. Transactions involving offsets generated by projects at the facility have ground to a halt until the “disruptive” review is complete, as the regulators could potentially invalidate the offsets. 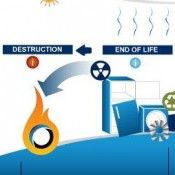 3 June 2014 | – California’s cap-and-trade program is facing the first test of the controversial invalidation provisions featured in its carbon offsets program.

The California Air Resources Board (ARB) – the agency tasked with overseeing the state’s cap-and-trade program and its offset component – announced last week that it is reviewing compliance offsets issued for ozone depleting substances (ODS) destruction events that took place at the Clean Harbors Incineration Facility in El Dorado, Arkansas. These substances, which include foam blowing agents and refrigerants, are much more potent than carbon dioxide in terms of their global warming potential, so the ARB has adopted a process to count the greenhouse gas emissions reductions associated with destroying these materials in the United States and allow these reductions to be used for compliance in its program.

These ODS projects may have been conducted while the Arkansas facility was in violation of its operating permit issued under the Resource Conservation and Recovery Act. The 1976 legislation gave the US Environmental Protection Agency the authority to control hazardous waste from “cradle-to-grave” – including generation, transportation, treatment, storage and disposal – and established a framework for the management of non-hazardous solid wastes.

“We are doing a lot of investigation and research trying to help ARB get through this review,” said Jeff Cohen, Senior Vice-President of Science & Policy and Co-Founder of EOS Climate, which develops ODS projects at the Clean Harbors facility.

The regulators are not raising questions about the integrity of the offsets themselves as they believe that these offsets meet ARB’s criteria of being real, quantifiable and verifiable reductions. But the cap-and-trade regulations allow the ARB to review and invalidate any offsets if the projects are determined to be in violation of any local, state or national laws during the period under which the offsets were issued.

“We’re happy the ARB is being diligent about ensuring offsets have integrity,” Cohen said. “We support that and we understand its policy in wanting to review projects that might have some connection to a violation of a federal or state law. We think this is a case that illustrates the importance of having clearly defined criteria on what it means for a facility or a project activity to be in or out of compliance. The unit that is the subject of the review has nothing to do with the incineration or destruction activities. It’s completely peripheral.”

California’s cap-and-trade regulations include so-called buyers’ liability provisions that allow the regulators to invalidate offsets found to be faulty or fraudulent and require regulated entities to surrender replacement offsets for compliance. These controversial rules are often blamed for a lack of liquidity in the California offset market.

“I don’t expect any credits to be invalidated as a result of this review, but in the meantime it is potentially two months of disrupted operations, which can damage confidence in how this program is being implemented,” Cohen said.

It is unclear exactly how many projects conducted at the Clean Harbors facility or offsets generated by these projects are affected by the review. The ARB and Clean Harbors have not yet responded to requests for comment.

None of the compliance offsets currently under review have been used for compliance in the cap-and-trade program. But until the review is complete, the ARB has blocked transfers of the offsets on its system and the Climate Action Reserve (CAR) has strongly advised parties not to engage in any transactions of offsets generated by projects that took place at the facility. Both CAR and the American Carbon Registry – organizations that develop methods (or “protocols”) to account for carbon mitigation – posted notices about the ARB review on their websites.

The review could have far-reaching implications beyond ODS projects, Cohen observed. For example, the ARB in April approved a new protocol that would generate compliance-grade carbon offsets from coal mine methane projects, which also have state and federal permitting compliance requirements.

Organizations holding the affected offsets have been notified and have 25 calendar days to provide information to the ARB, which then has 30 days from the day that all information is submitted to make a final determination on whether there was a violation and if it was meaningful enough to warrant invalidation of the offsets. If the offsets are found to be compliant, then they will once again be eligible for transfer in the ARB’s registry.

EOS, which has transacted about four million tonnes of offsets for California’s compliance market, is planning to submit information to the ARB and is hoping other affected parties will do the same in pursuit of a quick and definitive resolution, Cohen said.

“It’s a very important development in the offset market and it very clearly demonstrates the ARB is taking its authority to invalidate offsets quite seriously and will use it when appropriate,” said Julian Richardson, CEO of Parhelion Underwriting, a specialty insurer focusing on the climate finance sector that has developed a policy to cover the invalidation risk. “In this instance, we don’t know the full details. Certainly the potential impact is that if all of these offsets are invalidated, that’s a very serious issue.”

Since the news broke, Parhelion has received inquiries about its insurance policy and is still able and willing to cover the invalidation risk for California-bound projects, except for the actual offsets that have been frozen, he said.

“We always knew what would trigger a review, but what concerns me is why this was not picked up previously by any of the verifiers of the projects,” Richardson said. “There’s clearly a gap in the verification process. It should have identified that Clean Harbors was in this process with the EPA.”