US President Barack Obama told his now-famous salmon joke on Tuesday to illustrate the silliness of unnecessarily complex regulation, but the joke says more about the complexity of coastal ecosystems and the challenge of keeping them intact than it does about regulatory dysfunction It’s a challenge that can be met by getting the private sector involved in protecting our coasts. 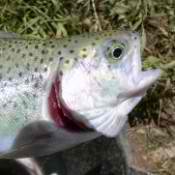 US President Barack Obama told his now-famous salmon joke on Tuesday to illustrate the silliness of unnecessarily complex regulation, but the joke says more about the complexity of coastal ecosystems – and the challenge of keeping them intact in the face of growing development – than it does about regulatory dysfunction. It’s a challenge that must – and can – be met by getting the private sector involved in protecting the nature along our coasts.

27 January 2011 | If there are two things we’ve all either heard about or recall from US President Barack Obama’s State of the Union Address, it’s his outreach to the business community and his salmon joke.

“The Interior Department is in charge of salmon while they’re in freshwater, but the Commerce Department handles them when they’re in saltwater,” he said.  “And I hear it gets even more complicated once they’re smoked.”

He got a laugh that night, but woke up to a round of rebuttals – some claiming he flat-out got it wrong, and others claiming that the apparent dysfunction he was trying to highlight actually reflects the challenge of creating a man-made regulatory apparatus in a world not of our making.

Ultimately, the joke reflects the fact that oceans, streams, and lakes are different ecosystems that flow into each other.  They follow different rules of their own making, and these differences would exist even if the Departments of Commerce and Interior didn’t.  Nowhere are these differences more pronounced than in estuaries (where streams empty into oceans) and riparian zones (where land gives way to water). It’s no coincidence that human society evolved along these fertile verges, for these highly productive but sensitive areas deliver scores of ecosystem services upon which our commerce, trade, and sustenance depend.

That’s why Maryland Governor Martin O’Malley today released a report on the benefits of ecosystem markets to his state and the surrounding region. The report highlights both the need to incorporate the value of nature’s services into our economic system and the challenges we must overcome to do so.The report highlights not only the varying responsibilities of different federal agencies, but of different state agencies as well.

In the past year, three different Katoomba Meetings have focused on finding ways to capture nature’s values from watersheds to the coasts.  One took place in Palo Alto, California, another in Hanoi, Vietnam, and a smaller one in La Paz, Mexico on the eve of global climate talks held in Cancun, Mexico at the end of 2010.

All of these meetings explored innovative new financing mechanisms that can be used to save mangroves (which provide coastal protection, shelter for young fish, breeding grounds for shrimp, and wood for local villagers), reduce overfishing through the use of catch shares, and reduce water pollution through the use of water quality markets, among other marine and coastal ecosystem services.

Salmon aren’t the only creatures that cross boundaries – so do scores of other animals, not to mention the very water that the salmon swim in. Just as President Obama alluded to the need for more coordinated regulation of salmon, so should we have coordinated regulation fostering mechanisms that finance the protection of these linked waterways and coasts.

But enticing people to pay for ecosystem services requires asking them to rethink the way they look at nature.  Take the case of oysters – which, like Salmon, live in both streams and oceans. They also perform a variety of functions – the primary one, at present, is letting themselves be devoured by us, but the other is more sublte. Oysters – uneaten and alive – help nature deliver services that make our lives easier.

Among these services are the absorption of nitrogen, which runs off of farmland and feeds algae that sucks up oxygen causing “dead zones” across the Chesapeake Bay. They also clump together into massive oyster reefs that provide shelter and breeding grounds for blue crabs, striped bass and scores of other little animals.

But there’s a tradeoff: when oysters are used for mopping up nitrogen, their food value diminishes as they must stay intact to do so. Our economic system currently values only that food value , but not the other services that oysters provide, even though those services underlie the tremendous value generated by other sectors across the region.

Linking upland and upstream activities to what is happening to the oysters and salmon in estuaries and out in the oceans through ecosystem markets and prudent regulation may just be the start to simplifying how we coordinate our regulations.

Podcasts From Poseidon: Palo Alto Audio Streams Now Online
PES in Southeast Asia: An Online Resource for Students and Practitioners
The Allure and Elusiveness of Mangroves as Carbon Sinks
Water Trading: the Basics
Will Catch Shares Reel in Overfishing?

Steve Zwick is Managing Editor of Ecosystem Marketplace.Ã‚Â  He can be reached at [email protected]