Sidestepping Congress, President Barack Obama finally responded to appeals for his administration to cut carbon pollution from the highest-emitting sources in the US as part of a comprehensive climate plan. The president’s remarks provided an apparent boost to state-based carbon markets such as the Regional Greenhouse Gas Initiative and the program launched by California in January. 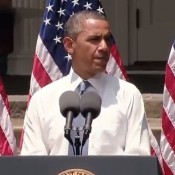 Sidestepping Congress, President Barack Obama finally responded to appeals for his administration to cut carbon pollution from the highest-emitting sources in the US as part of a comprehensive climate plan. The president’s remarks provided an apparent boost to state-based carbon markets such as the Regional Greenhouse Gas Initiative and the program launched by California in January.

27 June 2013 | Advocates of carbon trading are cautiously optimistic following US President Barack Obama’s decision to issue a presidential memorandum directing the Environmental Protection Agency (EPA) to work expeditiously to complete carbon pollution standards for both new and existing power plants. The president’s explicit acknowledgement of state leadership in forming cap-and-trade programs signals that these programs will be welcomed into a federal regulatory regime and could even instigate an expansion of trading programs to other states.

The US has committed to reducing its greenhouse gas (GHG) emissions by 17% from 2005 levels by the end of this decade. Power plants are the largest concentrated source of US emissions, accounting for about one-third of domestic GHG emissions, according to the EPA. The agency has already proposed, but not yet finalized regulations for new plants, and certain stakeholders have been lobbying the administration to pursue regulations for existing units.

“You can’t really get to the goals you need to get to to protect the climate without reducing power plant emissions,” says Judi Greenwald, vice-president of technology and innovation for the nonprofit Center for Climate and Energy Solutions (C2ES).

The president’s memorandum directed the EPA to issue a new proposal for regulation of new units by no later than September 20, 2013. Obama also requested that the EPA issue proposed standards, regulations or guidelines for existing facilities by June 1, 2014, with the final requirements published no later than June 1, 2015, and states submitting their implementation plans to the agency no later than June 30, 2016 after conducting consultations with the states and all relevant stakeholders.

“A lot of people weren’t paying attention to this because they thought it was not happening anytime soon,” says Tom Lawler, the International Emissions Trading Association’s (IETA) Washington DC representative. “Now it’s front and center.”

The president’s speech and accompanying climate plan document did not provide many details about the upcoming EPA regulations, which would be developed as New Source Performance Standards under Section 111(b) for new plants and Section 111(d) for existing plants under the Clean Air Act. But advocates of carbon trading were particularly encouraged by the president’s statement that he will direct the EPA to be flexible to the needs of different states and his explicit recognition of states that have already implemented or are implementing market-based solutions to reduce GHG emissions, providing an apparent boost to compliance markets in California and the Northeast’s Regional Greenhouse Gas Initiative (RGGI).

Jason Schwartz, legal director of the Institute for Policy Integrity, says the president’s remarks signaled that the regulations on existing power plants to be produced by the EPA will allow these states to comply using their efficient market mechanisms that produce GHG emissions at lower costs.

“The single word we were most excited to hear in the president’s speech and his plan was flexibility,” he says.

“That’s music to our ears,” Greenwald says. “We think that the statute affords substantial flexibility in using market mechanisms.”

Once states receive instructions from the EPA, they are going to evaluate all the compliance tools at their disposal such as renewable energy programs or coal plant retirements, but they may find that joining an existing cap-and-trade program is the most cost-effective option, emissions trading advocates say.

“We think trading is the most efficient tool,” Schwartz says.

RGGI may be able to demonstrate that its cap-and-trade program satisfies the emissions reductions that will be required by the EPA, but the situation will be more complicated in the case of California’s program since it regulates emissions from many sources, not just power plants, according to C2ES.

“It’s just one extra thing to figure out,” Greenwald says. “It’s certainly not a flaw in California’s program.”

“I think (RGGI) can and likely will stand in for any alternative EPA requirements,” says Peter Shattuck, director of market initiatives for NGO Environment Northeast.

The steps outlined by Obama can be taken through executive action, bypassing the Congressional gridlock that has prevented climate legislation from passing both houses in recent years, according to most experts. But he made it clear that he is still urging Congress to develop a bipartisan, market-based solution to climate change. “I still want to see that happen,” he says. “I’m willing to work with anyone to make that happen. But this is a challenge that does not pause for partisan gridlock. It demands our attention now.”

The president’s announcement has the potential to prod some members of Congress to once again pursue a legislative solution rather than allowing the EPA to move forward with regulations, some experts say. The House of Representatives barely passed a comprehensive climate plan that would have included a federal cap-and-trade program in June 2009, but the legislation failed to gain traction in the Senate.

“I think the possibility of a federal scheme is on the table,” says Glenn Unterberger, practice leader of law firm Ballard Spahr’s environmental and natural resources group.

Economists who have been evaluating or advocating for the implementation of a national carbon tax also note that the looming regulatory regime could focus more attention on a potential tax solution to the GHG problem.

“I know from history that sometimes regulatory approaches kind of run off the rails from an efficiency point of view and become quite problematic in terms of their costs and benefits,” says Donald Marron, director of economic policy initiatives and institute fellow for the Urban Institute. “Introducing a carbon tax may let you avoid those extra costs of bringing down carbon emissions.”

“It’s just striking to me that in the face of the significance of the climate problem, the Congress takes such an anti-business stance that forces the administration to take this complex regulatory approach rather than using the power of carbon pricing,” adds Gilbert Metcalf, professor of economics at Tufts University, speaking at a Resources for the Future event on Wednesday.

But others have serious doubts that Congress can be pushed to take action on the climate issue even with the certainty of EPA regulation.

“This has been a very partisan issue,” Lawler says. “I’m just not sure the politics will allow that conversation or the ability to develop a better solution legislatively.”

And the announcement will undoubtedly instigate a backlash from members of Congress and industry officials opposed to EPA action and give rise to litigation contesting the rules ultimately issued by the agency, although efforts to prevent the EPA from acting are likely to continue to fail in Congress, several observers note.

“It’s extremely likely that we will see a challenge in today’s political and legal environment,” Schwartz says. “Anything EPA does is very likely to have a challenge from one side or the other or both.”

While the Obama plan is unlikely to have a direct impact on the voluntary carbon markets, the announcement does have the effect of encouraging countries and companies to start taking concrete action against climate change, says David Antonioli, the CEO of the Verified Carbon Standard (VCS).

“I think it is a good announcement for the market per say, even though it’s not a market solution,” he says. “The more countries take initiative and start to do something concrete about climate change, it starts to permeate around the rest of society. It will mean that more people will become aware that this is a real problem.”

Awareness of the need for corporations to take action will grow despite the absence of a broader requirement for non-utilities to reduce GHG emissions, Antonioli says.

“It will be something that will help the voluntary market continue to grow and that’s why I’m pretty hopeful about it,” he says.

Obama also pledged that his administration would redouble its efforts to engage its international partners in reaching a new global agreement to reduce carbon pollution. Major developed and developing countries pledged to reduce emissions at the 2009 United Nations Framework Convention on Climate Change (UNFCCC) and the president noted that the 2015 conference would play a critical role in defining a post-2020 trajectory.

“That’s a sensible thing because it’s not just a national issue,” Unterberger says.

The climate plan also highlighted the Obama administration’s efforts to reduce emissions from deforestation and forest degradation (REDD), with as much as 80% of these emissions coming from the land use sector in some developing countries. In 2012, the US Agency for International Development’s forestry programs contributed to reducing more than 140 million tons of carbon dioxide emissions by supporting multilateral initiatives such as the Forest Investment Plan and the Forest Carbon Partnership Facility, according to the plan.

“It’s encouraging to see President Obama put forward a bold plan to address the challenges of climate change and embrace key provisions like carbon finance and REDD to achieve those goals,” the VCS’ Antonioli says. “Similarly encouraging is his endorsement of the UNFCCC negotiations as is his call to apply the strength of the US government towards the goal of an international agreement by 2015.”