Two years ago New South Wales’ launched its Biobanking scheme.  The Office of Environment and Heritage is claiming success and now the first official review has been launched making a note of the methodologies and environmental outcomes but largely commenting on the functionality of the market. 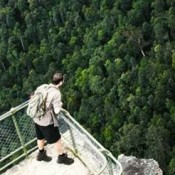 Two years ago New South Wales’ launched its Biobanking scheme.   The Office of Environment and Heritage is claiming success and now the first official review has been launched making a note of the methodologies and environmental outcomes but largely commenting on the functionality of the market.

5 September 2012 | Submissions closed July 9th, for New South Wales’ Biobanking’s first official review. It’s been two years since the scheme officially launched, and the statutory review has come at a good time. With the first ‘Statement” (formal obligation to buy credits) issued in January 2011, 2012 has seen a surge of market activity. In the year to May 2012 eight “Agreements” (creating Biobanks and credits) had been signed, with four of these since January this year.

The New South Wales Office of Environment and Heritage, the agency who runs the scheme, proudly reports that a total of 382 hectares of native vegetation and threatened species have been conserved and so far, over 1400 ecosystem credits have been retired, with credit prices ranging from approximately $1950 to $13,000 per credit.

Approximately $3.7 million has been deposited into the BioBanking Trust Fund and over $530,000 paid out to landowners to fund agreed management activities on Biobank sites.

The BioBanking Scheme is created under the NSW Threatened Species Conservation Act 1995 (TSC Act), and was amended by the Threatened Species Conservation (Biodiversity Banking) Regulation or “Biobanking Act” in 2008. The scheme launched in 2010 when the mandated Biobanking Assessment Methodology (BAM) was released, enabling private landowners who create biobanking credits to be issued with Biobanking Agreements to recognize their work and bind them to their obligations.

To offset a development impact by using Biobanking credits are issued with a Biobanking Statement, although developers have other choices to obtain development permits and meet environmental regulations. And credits can also be bought by fairly anyone who simply want to ‘own’ a bit of NSW forest or grassland.

Along with the Credit Calculator, the BAM is the linch-pin of the system: together they generate either ecosystem or species credits depending on the site in question, and are supported by the pre-existing Threatened Species Database, and Vegetation Database. It was designed based on the reputable Habitat Hectares method developed in relation to Southern Australia and the State of Victoria as a primarily conditional assessment of vegetation.

The Science of Biobanking info guide explains how the methodology was developed, drawing on additional academic research by respected Australians such as Briggs, Gibbons, Ayers, and Doyle among others.

Each unit of ecosystem is a three-tiered classification of type, based on the above databases. This classification is formally and replicatably assessed based on how close its current condition matches the optimal ‘benchmark’ for that ecosystem type. Via the on-line Credit Calculator a biobanker is issued with a number of credits, with a specific profile that must match that of a potential credit seller.

The current methodology with suggested amendments is just one part of the current review. But the dedicated science and databases as well as the growing use of the scheme outside the official space are solid indicators of the strength of this part of Biobanking. The suggested amendments, such as greater weighting of riparian areas to reflect their ecological contribution, can be expected to offer little more than commonsense to most stakeholders.

Ultimately the review looks at the whole scheme, yet assuming a strong methodology and guided by the Summary of Themes and Issues that accompanies the review, the real challenge the scheme would like to address appears to be the functioning of the market.

Not to suggest there is no market, as trades are unquestionably occurring. The above Summary provides a quick list of numbers, including that to 23 March 2012, five credit sales for development offsetting have taken place on three biobank sites. Economically, $2.4 million from credit sale proceeds is held in trust to fund the management of biobank sites. And as mentioned earlier over $530,000 in management payments have been paid out to landowners from the BioBanking Trust Fund.

But does this represent functioning as a market that delivers the credible environmental outcomes and practical impact offsetting it aspires to?

The discussion document to follow the summary is well-written and presents guiding questions to potential submitters to assist them in addressing key issues.

In reading through, one peaks into some of the concerns of the program. Why are potential Biobanking landowners expressing interest, but not rapidly generating banks? Why are developers actively using the Methodology, and some even purchasing credits yet choosing to take a different development-approval track and not formally “Biobank”? And is the manner of trading numerous specific credit profiles counter-productively retarding trades, yet still jeopardizing local values when vegetation type are exchanged, but in an area outside the local-body government’s concern?

Geographic trade restrictions, such as are applied in the USA markets with Service Areas, were avoided with concerns for restricting the market too much. But it would seem that a few landowners, a few developers and a few trades do not make a market.

Arguably a true test of a ‘free-market’ system harks back to economics where individuals’ costs and benefits are traded so that each gets what the need with the least waste of money.

Is everyone currently ‘biobanking’ receiving adequate benefit for the costs incurred? Are those who receive the benefits paying appropriate costs?

And when all is said and done, is it achieving robust environmental outcomes not possible by simply paying for more national parks?

An interesting contrast with the US systems is that so much of the NSW system is done by the Government agency, and so much information is publicly provided. Legal, political and cultural diversities aside, this difference seems too glaring to ignore.

If government programs such as land-owner grants or protected areas, are viewed as caring for the environment on behalf of its public then correspondingly, extensive public access to conservation systems such as biobanking occur by centralized provision of information; monitoring, reporting and structuring by government is therefore unavoidable.

But at what point does that sap the life out of a free-market? Compare with the most familiar of markets – real estate or the stock exchange trading floor. Recent malpractices notwithstanding, the information is clearly there, but buyers and sellers are engaged because they think they know something the others don’t. Potential sellers can apply their skills – judiciously improving a property, or spotting a well-managed company – and trade it with a buyer who’ll pay for them thus applying that skill.

There doesn’t seem room for this in the NSW market. There is no room to apply your skills – negotiate a better credit price with sales and marketing, provide innovative land-management, invest your trust fund money more effectively – because it’s all decided and explicit already.

And maybe that’s a good thing. There’s also no room to apply skills in wasteful financial management or fly-by-night environmental work. If the environment belongs to the public, then the public has a right to know all possible information and control all aspects through their government. Yet achieving both this, and a trading system inspired by private-sector free-market principles, has some fundamental clashes.

There has yet to be any public acknowledgment of truly entrepreneurial business investment in the system, and any system so comprehensive in its environmental specificity eventually jeopardizes on-the-ground conservation actions if only a limited few choose to implement the process.

One can’t possibly write about environmental trading markets in Australia without reference to the long-time operating Bush-Broker and Bush-Tender systems in Victoria. By virtue of their liquidity and length of tenure, any discussion of Australia’s biodiversity markets commonly converges upon the success of this scheme. Yet as Biobanking in New South Wales was looking towards greater participation and effective environmental outcomes, the home of Australia’s biodiversity markets – The State of Victoria – was attempting to manage the impacts from the June 6th collapse of the Morwell River as a result of nearby mining operations at Yallourn mine.

Mindful it is unrelated to Victoria’s Bush Broker and Bush Tender scheme, the management or miss-management of this river (with several ‘re-locations’ appearing to be an element of the disaster) is a pertinent reminder that offset/impact credit trading is unlikely to be a panacea for managing the inevitable conflicts between some developments like coal mines, and some natural resources like whole rivers.

Perhaps Victoria can tell NSW that credit-trading systems hold incredible potential, but anticipation that every part of the environment be comprehensively addressed by the single sweep of a Credit Trading system lead to frustrated expectations and intractable confusions. And such vacuum of confidence turns into a self-fulfilling prophecy of floundering credit trading in the ‘Free-Market’ systems we are searching for.

It is a legitimate and laudable decision if NSW decides that a truly free market for some of its environmental management is not the answer. Perhaps the insurmountable challenge of keeping a foot in each camp and running the gauntlet of environmental solutions with Biobanking credits as currently traded is why this review is so timely. Regardless it’s a good place to start to improve the outcomes for NSWs’ ecosystems and species – flora, fauna and human alike.