Two key committees of the US House of Representatives held a hearing on the “social cost of carbon” this week, but they ended up focusing more on the cost of fixing the mess than on the cost of letting it run rampant. Rachel Cleetus of the Union of Concerned Scientists explains why that’s a big mistake that could cost us all dearly. 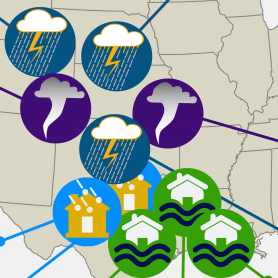 Last month, a group of prominent Republicans called for a nationwide price on carbon to reduce greenhouse-gas emissions and slow climate change. This week, two key subcommittees of the US House of Representatives – namely, Environment and Oversight – held a hearing to address the issue.

“Members of Congress met to discuss the costs of climate change,” read the Washington Post’s headline of their coverage. “They ended up debating its existence.”

As the hearing was getting underway, Rachel Cleetus of the Union of Concerned Scientists posted this backgrounder on the social cost of carbon:

What is the Social Cost of Carbon?

Our global warming emissions are already contributing to climate impacts such as flooding from sea level rise and increased heavy precipitation; longer, more intense wildfire seasons; heat waves; and droughts. The risks of these types of impacts will grow as emissions rise.

In 2016 alone there were 15 extreme weather and climate-related disasters that cost more than a billion dollars apiece (see map). Climate change is contributing to worsening risks of many of these types of events. If you go to this EPA site, you can click on the map to see the impacts of climate change where you live in the nation. (Assuming that webpage is allowed to stay on line of course…)

In previous blogposts I’ve explained why the social cost of carbon is so important and how we have arrived at the current US government value for the social cost of carbon through an extensive and ongoing interagency process including a public comment period. (Note that the SCC information also used to be available on the Obama administration Office of Management and Budget website).

How is the Social Cost of Carbon Used by the Federal Government?

The social cost of carbon is used in cost-benefit analyses that agencies routinely undertake as part of the regulation-setting process. Cost-benefit analyses, which have been a feature of rulemakings since the Reagan era, are meant to quantify the impacts of a regulation. For regulations that help cut carbon emissions, the benefits of carbon reductions are quantified by applying the dollar per ton estimate of climate damages avoided based on the SCC.

Michael Greenstone, formerly at the Council of Economic Advisors and one of the witnesses at today’s hearing, co-authored a recent op-ed in the New York Times together with Cass Sunstein (former Office of Information and Regulatory Affairs Administrator at OMB), explaining why the SCC is a necessary and legal component of federal cost-benefit analyses.

As they point out, attempts to do away with the SCC would “defy law, science and economics.”

Why Does the SCC Include Global Damages?

One red herring that may come up in today’s hearing is the claim that the SCC should not include global damages from our carbon emissions. This type of reasoning fundamentally misstates the challenge of climate change, which is a result of global carbon emissions. No single nation can solve this problem alone. And no nation is immune to the effects of our collective emissions.

Just one manifestation of this is the growing challenge of climate refugees, people around the world displaced by climate factors such as drought and sea level rise.

Solving climate change will require us working together in cooperation with all the nations of the world. Each nation must recognize that their emissions have impacts on everyone and make choices that further our collective good. If, instead, we all retreat to our own corners and act solely out of narrow self-interest, we will fail together to constrain emissions to the levels necessary to avoid the worst impacts of climate change. (This type of problem has been called ‘The Tragedy of the Commons.’)

The US also benefits from global reductions in carbon emissions. News that China’s emissions may have stabilized or fallen for the fourth year in a row is good news for us all. (Even as we know that more action to cut emissions is required by all major emitters). In other words, solving climate change is like the ultimate team sport. With very high stakes if we fail to win.

Improving the Social Cost of Carbon

There’s no doubt that the social cost of carbon must be updated on a regular basis to take account of the latest science and economics. Just as an example, we are seeing unprecedented changes in the Arctic and the Antarctic that could portend significant impacts on weather patterns and sea level rise. A recent article also pointed out the need for better climate and economic modeling to include a wider range of social and economic impacts.

The National Academies of Sciences, Engineering and Medicine recently undertook a project to assess approaches to update the social cost of carbon and released two reports with recommendations. Some of these recommendations were already being implemented by the Obama administration, although more work remains. The methodology has also been extended to methane and nitrous oxide emissions, two other potent global warming gases.

What we should not and cannot afford to do is refuse to accept the facts: climate change is real and it is already having serious and costly effects on people. Therefore our policy choices must appropriately reflect the benefits of cutting global warming emissions.

If the concept of a carbon price is new to you, be sure to check our the very first edition of Bionic Planet on iTunes, TuneIn, Stitcher, or wherever you access podcasts. You can also stream it here: