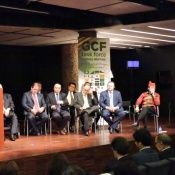 “Last year we saw the importance of subnational leadership in driving the international agenda,” said Bjurstorm, Norway’s special envoy on climate change. She also cited subnational commitments such as the Rio Branco Declaration, an agreement among 13 rainforest nation governors to slash deforestation by 2020, during her speech at the GCF event.

These comments were perhaps expected as the GCF is a collaboration of states and provinces from seven countries with the shared goal of reducing emissions from deforestation and forest degradation (REDD) using jurisdictional approaches.

A more surprising comment was what Bjurstrom announced shortly afterward: 200 million Norwegian krone (roughly USD $25 million) in financial support to the GCF fund. The money flows through the Norwegian Agency for Development Cooperation (NORAD) and will be distributed over a 4-year period, Bjurstrom said.

“We realized the important work being done at the subnational level and wanted to support it,” said Bjurstrom. “This is the right moment to act.”

“This money is specifically for the GCF Fund with no strings attached,” Bjurstrom said.

The direct access to funds makes Norway’s contribution special, agreed Danae Azuara, a Project Manager in Mexico with environmental NGO the Environmental Defense Fund,. “It is recognition to the subnational action that is incentivizing innovative solutions.”

More details on this announcement are expected but Bjurstrom said she hopes Norway’s action will encourage other countries to step up and do the same.

In terms of allocation, typically, 80% of all funds flow to capacity building (technical assistance and training, institutional structure and policy framework among other activities) said Ben Ayade, the Governor of Nigeria’s Cross River State, a GCF member. However, he stressed the importance of on-the-ground activity.

“Capacity building is great, but not more important than planting trees. Success in forests can only be measured by forest cover,” Ayade said.

Bjurstrom noted this point as well in highlighting on-the-ground progress and her support of subnational approaches to deliver deforestation reductions. During her GCF speech, she cited jurisdictions as having the potential to improve agriculture’s sustainability and productivity while at the same time protecting and restoring remaining tropical forests.