The United States Senate now has a climate change bill to go along with the one that came through the House of Representatives earlier this year. It’s got a tighter cap than does the House bill and is especially friendly to trees. EM examines its provisions for reducing emissions from deforestation and forest degradation. 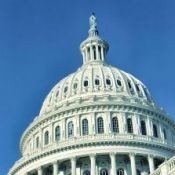 The United States Senate now has a climate change bill to go along with the one that came through the House of Representatives earlier this year. It’s got a tighter cap than does the House bill and is especially friendly to trees. EM examines its provisions for reducing emissions from deforestation and forest degradation.

5 October 2009 | On October 1st, US Senators John Kerry (D-Mass.) and Barbara Boxer (D-Calif.) released the first official draft of their climate change bill, the Clean Energy Jobs and American Power Act, but it’s not likely to reach the floor before global climate change talks are set to wrap up in Copenhagen, according to the White House senior energy advisor and other majority senators.

Forestry and Land Use

The international forestry provisions in the bill   echo those originally included in the House bill passed in June.

It presents three mechanisms for channeling funding aimed at reducing deforestation: offsets, a supplemental pollution reduction program, and proceeds from auctions from the market stability reserve.

The bill also signals a strong recognition and commitment to address the 20% of emissions coming from land use, land-use change and forestry (LULUCF).

The United States Agency for International Development (USAID), the US State Department and the Environmental Protection Agency (EPA) will continue to oversee the Emissions Reductions from Reduced Deforestation program as well as international offsets from reducing deforestation activities. Key themes that emerged with regard to these activities were environmental considerations such as promoting native ecosystems, and biological diversity and governance concerns, such as the need for transparency, public consultation and benefits-sharing, as well as giving due regard to the rights and interests of local communities, indigenous peoples, forest dependent communities and vulnerable social groups when implementing activities that reduce greenhouse gas emissions from deforestation and forest degradation (REDD).

Below you will find a description of points of departure and those that survived from the House bill as it impacts the forest carbon sector.

The Supplemental Emissions Reduction Program aims to achieve an additional ten percent emissions reductions, or a third of its 2020 reduction target ,solely through international deforestation activities. In other words, this is in addition to the 20 percent of emissions reductions that need to be achieved by 2020. Incidentally, the 20 percent reduction can be satisfied using offsets – and forest carbon activities are project types under consideration by the EPA (see below for offset project types under consideration). The Administrator shall allocate and adjust the necessary allowances for each vintage year for REDD activities to ensure the achievement of this 10-percent objective by 2020.

Two billion tons annually remains the total number of permitted offsets, but domestic offsets will now make up 75% of the total rather than the half called for in the previous two Senate draft bills and the House bill. Even though international offsets will now account for a quarter of projects annually, the percentage allotted to international offsets may increase to 37.5%, if the domestic supply falls short (722 (d)1 B iii).

Section 733 of the bill expands the scope of forestry provisions substantially to include:

Methodologies and standards shall address:

Accounting for Reversals will require:

The crediting period for forestry projects will be 20 years and can be renewed. Conservative assumptions or methods will be applied to maximize the environmental integrity of offsets. Pre-existing methodologies will be considered. International offset credits will only be issued on a sectoral basis after a period of eight years after the enactment of the bill (least developed countries will be exempted for five additional years).

Developing countries must be parties to bilateral or multilateral agreements or arrangements that the United States is a part of to receive funding for REDD offsets. Only ex-ante crediting   will be allowed (in other words the reduction has occurred before the issuance of the international offset credit and has taken into account international standards using ground based inventories and remote sensing technology to ensure all relevant carbon stocks are accounted). Finally, the bill provides for discounting for uncertainty specific to each country, including its technical capacity.

Projects registered under other government-recognized programs will be accepted as well as a credit issued under any regulatory or voluntary greenhouse gas emission offset program that:

Please see our Reprint Guidelines for details on using our content.

Waxman-Markey: Who Kicks the Tires?
Climate Change and Forestry: a REDD Primer