Wetland mitigation banking is a growing industry in the US but its complexities run deep and as of right now, it lacks a proper analysis evaluating the risk facing both bankers and regulators.  But two industry analysts are making progress with a paper offering guidance on market risks. Here is a brief summary of the 22 risks the authors discuss. 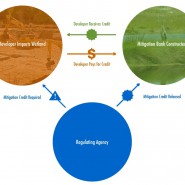 Wetland mitigation banking is a growing industry in the US but its complexities run deep and as of right now, it lacks a proper analysis evaluating the risk facing both bankers and regulators. But two industry analysts are making progress with a paper offering guidance on market risks. Here is a brief summary of the 22 risks the authors discuss.

23 January 2014 | Wetland mitigation banking is the largest ecosystem services market in the US. But that doesn’t mean the market has reached full maturity or that it comes without risk. A study released last month entitled Navigating Wetland Mitigation Markets: A Study of Risks Facing Entrepreneurs and Regulators, says the market lacks transparency as well as efficiency and is relatively unknown to investors.

The paper, written by Patrick W. Hook and Spenser T. Shadle, two recent joint-degree graduates of Yale’s School of Forestry and Environmental Studies and School of Management, is meant to be a comprehensive reference for newcomers to the mitigation scene from the business and finance sector as well as for regulators. It draws out the most critical risks separate participants face and offers strategies to manage this risk when possible. The study is based on existing writings on this subject as well as interviews with industry participants on the most significant risks.

The creation of the Clean Water Act (CWA) in 1972 not only helped curb the ongoing pollution of US’ waterways, but it also established the significance of wetlands to local and national economies. And as time went on, amendments were passed that continued to solidify their importance. Section 404 of the CWA puts the US Army Corp of Engineers (Corps) in charge of monitoring dredging and filling activities. Then the government adopted a ‘no net loss’ of wetlands policy.

With these federal regulations came an ecosystem services market based around mitigating wetland loss.

Fulfilling wetland compensatory mitigation requirements can be done using three options. They are Permittee-Responsible Mitigation (PRM), In-lieu Fees (ILF) and wetland mitigation banking. For the banking option, the bank restores, enhances, creates or preserves an area of wetland which generates credits. Developers offset their negative impacts on wetlands by purchasing credits from a wetland bank.

The paper discusses different types of risk and divides them into two categories: those faced by entrepreneurs/investors and those faced by regulators.

The paper then discusses the risks facing both the regulator and the entrepreneur. There were three risks they associated with both.

Hook and Shadle’s paper goes on to suggest ways to manage and minimize risk that can’t be avoided. For instance, choosing a bank site in a district that favors the industry is a smart decision as is developing relationships with regulators. This will ensure the regulator is acting in the banker’s best interest and help control possible risks. The paper also mentions building financial models for valuing risk.

In conclusion, the authors note the need for a more formal analysis on how entrepreneurs and investors should manage the banking industry’s risk especially when considering private sector involvement. The private sector will want to know the price of risk. But incomplete and low quality data has hindered past evaluations of mitigation banking, the authors say.

Once the wetland mitigation market has developed successful methods to understand, manage and value their risk, the authors say, those best practices could be applied to other emerging ecosystem services markets like nutrient trading and conservation banking.

Kelli Barrett is a freelance writer and an editorial assistant for Ecosystem Marketplace. She can be reached at [email protected]