The winds of change are blowing across the climate change policy landscape.  With legislation stalled in the US Senate, attention now shifts to state and regional initiatives.  In California, the Global Warming Solutions Act, better known as AB32, establishes a statewide mandate for Greenhouse Gas (GHG) reductions, including participation in a regional cap-and-trade system. 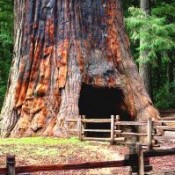 5 August 2010 | The winds of change are blowing across the climate change policy landscape.   With legislation stalled in the US Senate, attention now shifts to state and regional initiatives.   In California, the Global Warming Solutions Act, better known as AB32 and passed in 2006, establishes a statewide mandate for Greenhouse Gas (GHG) reductions, including participation in a regional cap and trade system.

The California Air Resources Board (ARB) is the state agency responsible for implementing AB32, and its been busy readying the emissions trading framework set to take effect in 2012.   On July 30, the ARB held a public workshop to discuss the role of Reducing Emissions from Deforestation and Degradation (REDD) in a California cap and trade system and offered glimpses of a new pathway to incentivize tropical forest conservation.

With REDD, the carbon sequestration benefits of the trees are monetized and carbon credits are generated.   In other words, it attempts to make trees more valuable standing up than cut down.   According to Barbara Bamberger, an air pollution specialist from the Office of Climate Change at ARB, “In California, we are focusing on REDD most likely to be the first sector-based offset crediting program out of the gate.”

REDD on the Horizon

The emerging California marketplace for REDD credits is certainly getting international attention.

“Many eyes of the world are turning to this room as they see California has the potential to lay the compliance template for REDD,” said Brian Murray, Director for Economic Analysis at Duke University’s Nicholas Institute for Environmental Policy Solutions.

Although a market for REDD offsets in California would be relatively small by international standards and may not be fully active until 2015, the ARB rulemaking process certainly has an opportunity to inform other international efforts.

“There’s a lot of good people and a lot of good projects trying to do the right thing,” said Tony Brunello, Senior Advisor to the Governors’ Climate & Forests (GCF) Taskforce.   “Over time, we think that ARB can provide the pathway to be able to develop some language to provide clarity and give [the world] hope that it will set a good template for what needs to be done at larger levels.”

Not everybody agrees that creating a compliance market for REDD credits is the best way to achieve climate-change policy objectives.   According to Kate Horner, Trade and Forest Policy Analyst at Friends of the Earth, carbon offsetting is a Band-Aid solution that fails to address the primary disease.

“International deforestation attempts are not new,” she said.   “Many are decades old.   A lot haven’t worked.   There is simply too much emphasis on generating new money without addressing the underlying political drivers that cause deforestation.   We are concerned that REDD credits will be used by countries to develop in a way that will create even more pressure to deforest.”

Horner suggests that a California-based REDD market will limit job creation opportunities and fail to reduce co-pollutants in the state.   In addition, Horner says that a number of structural challenges will need to be addressed.

“Avoided deforestation was left out of Kyoto because of technical constraints such as additionality and permanence,” she said.   “Good thinking is trying to address these problems, but none are perfect and all represent tradeoffs.”

Born in the USA?

Another issue is the location and geographical sourcing of credits.   Should there be limits on the use of international offsets in a domestic marketplace?   How many dollars from US carbon markets should be allowed to flow overseas?

Given the sizable forestry resources available internationally, the answer to this question could have a material impact on the final market clearing prices for these environmental commodities.   A lower price on carbon may be achieved through adoption of REDD, but the realistic supply of offset credits and the potential flow of money from US businesses to tropical forest nations is still unclear.

The principle of additionality, a fundamental offset quality criterion, states that countries should only get paid for protecting trees that would   have been cut down under “business as usual.”   The problem, of course, lies in the inherently unpredictable nature of the future.   Nobody really knows what “would have” happened in a given forest area.

For example, Guyana has vast forest resources, which cover nearly 77 percent of the South American country.     However, it also has a historically low – near zero – deforestation rate.   Traditional additionality requirements mean Guyana would have to demonstrate that forests are actually at risk in order to monetize its vast carbon resources.

To highlight its choices moving forward, Guyana commissioned a study by consulting firm McKinsey & Company, which indicated that economic pressures on the forest lands could result in a 4.3 percent deforestation rate.   The tactic of demanding payments to abstain from deforesting doesn’t sit well with some.

“This is environmental blackmail,” argues Horner.

However, in defending its position, the McKinsey report counters with the notion that by protecting its forests, Guyana forgoes economically viable opportunities that could net it the equivalent of somewhere between $430 million and $2.3 billion in additional value per year.

Should Guyana be punished for its historically low rate of deforestation while other countries with high rates of deforestation and histories of failing to enforce environmental laws win out? Or should Guyana be compensated for forgoing the exploitation of its natural resources?   The underlying question here revolves around how to define what really constitutes “business as usual.”   Should it be based on historical deforestation rates, or on the opportunity cost of future economic benefits?

For its part, ARB seems to be acutely aware of the complex set of issues.

“For offsets, we want to create an even playing field for our own forest sector,” said Bamberger.   “In California, our forests come first.   There’s room for both and we want to open the window for international offsets, but there must be significant incentives for forest offsets here in California.”

ARB is also addressing concerns around the risk of forest fires and other threats to forest stability.

“We are looking at long-term sustainability and permanence issues,” said Bamberger.   “We’re exploring ways to address these risks through insurance, buffers and a number of different mechanisms.     Permanence is a major requirement within AB32.”

In the months and years ahead, California has a unique opportunity to lay the groundwork for the first regulatory system to officially welcome REDD.   As other national and international efforts appear stalled, the California effort may be REDD’s last limb, or first seedling.

Lee Barken, CPA, LEED-AP is the IT practice leader at Haskell & White, LLP and serves on the board of directors of CleanTECH San Diego and the US Green Building Council, San Diego chapter.   Lee writes and speaks on the topics of carbon accounting, green building, renewable energy finance, IT audit compliance and wireless LAN technology.   He was a delegate at the COP15 climate conference in Copenhagen.   You can reach him at 858-350-4215 or lbarken@hwcpa.com.

Please see our Reprint Guidelinesfor details on republishing our articles.