Individuals have traditionally been a miniscule source of demand in the voluntary carbon markets. A new company called Sustain:Green is hoping to change that by offering consumers a credit card that makes over the traditional customer reward structure to allow them to finance the purchase of carbon offsets. 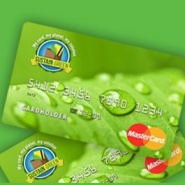 Individuals have traditionally been a miniscule source of demand in the voluntary carbon markets. A new company called Sustain:Green is hoping to change that by offering consumers a credit card that makes over the traditional customer reward structure to allow them to finance the purchase of carbon offsets.

27 April 2015 | Would you like some carbon offsets with those fries?

It may seem like a silly question, but if Sustain:Green has its way, some of the money generated from the purchases made by its customers – even French fries – will find its way into the voluntary carbon markets.

Sustain:Green CEO Arthur Newman previously worked on Wall Street and focused on the cap-and-trade market in the United States and the use of carbon offsets to offset carbon footprints as a former partner for Carbon Capital Advisors. He cites this experience working with large organizations in the carbon market as inspiration for the development of the credit card.

Newman recognized the limited scope of individual actions in the offsets market, and wanted to create an opportunity for individuals to take action like organizations do. Once individuals have taken basic steps to reduce their carbon footprint by, for example, changing out old lightbulbs for new, more efficient lightbulbs, it becomes incrementally more difficult and expensive to reduce their environmental impact.

Individual offset purchases have been minor contributors to the overall volume of voluntary carbon market transactions. In 2013, Ecosystem Marketplace found that just over 200,000 tonnes of carbon dioxide equivalent (tCO2e) were transacted by individuals, with an average price of $17.4/tCO2e. For comparison, the overall carbon offset market transacted 76 million offsets in 2013, with an average price of $4.9/tCO2e.

When asked about the relatively small size of the individual market, Newman is quick to point out the challenges for connecting individuals to the carbon market. He notes that offsets have not been marketed to consumers in a successful manner.

“Some airlines offered offsets after you purchased a plane ticket, but we feel that in a price sensitive purchasing transaction like airline tickets, this the wrong time to be asking a consumer to spend more money,” he said.

Additionally, the ability to purchase offsets from different companies based on different verification standards can be confusing to those not well-versed in the nuances of carbon offsets. Questions about transparency and what was being purchased may have also stymied the market.

“People often have had little transparency into what their offsets were going to fund and how the money was to be used,” Newman said. “Transparency was not high in many instances a decade ago when the market was born.”

The company started with the idea to of making offsets convenient and free, he said. What Sustain:Green is trying to do with its credit card and the individual consumer is to make offsetting as easy, transparent and cheap as possible.

While offsets aren’t free for Sustain:Green, they have gone as far as they can to make purchasing offsets free for its customers. “The difference with the Sustain:Green card is that we are giving these offsets away for free as a reward,” Newman said “People are not charged additionally for them, and there is no annual fee for having the card. Additionally, the rewards are automatically tied to spending.”

To do this, the card, which is financially backed by Commerce Bank, offers what works out to be the equivalent of 2.7% cash back on purchases, not including the 5,000 pounds that users receive upon the first purchase. But instead of consumers receiving cash back to purchase individual offsets, the money will be used by Sustain:Green to purchase offsets through the American Carbon Registry (ACR). ACR is a nonprofit enterprise of Winrock International focused on developing carbon offset standards and methodologies, and also serving as a clearing house to register, verify, and oversee offsets projects, and issue offsets from projects.

“I do really like the concept in that people don’t really have to do anything,” said Mary Grady, Director of Business Development for ACR, who secured and has already used a Sustain:Green card. “All they are doing is living their normal lives and shopping and while they’re doing that, they’re offsetting. I think it’s really interesting and I’m hoping it will be successful.”

The card has the other added environmental benefit of being biodegradable. This was something Sustain:Green specifically pursued, because Newman says “people overlook the amount of credit cards that get thrown away each year – it’s about half a billion credit and debit cards every year.”

The new card is marketed as biodegradable, but compostable may be a better term. “It takes about six months to biodegrade, and just has to come into contact with soil bacteria, all you have to do is cut it up and bury in the dirt,” He said.

Getting Those Pounds of Carbon

For comparison, if carbon offsets were purchased separately by consumers through the SustainGreen offset store, an equivalent amount of carbon offsets would cost the consumer $136 based on the $15 per tonne price offsets sell for in the online store.

Just do it (to Save the Rainforest)

Sustain:Green partnered with Mata no Peito, a coalition initiative to support organizations and communities to protect and replant forests throughout Brazil. Mata no Peito is funded through the retirement of Nike carbon offsets, the originators of the project. When Sustain:Green, or any of the other participants, purchases and retires certain carbon offsets, all of the money is donated to the Mata no Peito fund, which provides seed investments to projects in the Brazilian rainforest.

“It’s kind of a double win,” Grady said of Sustain:Green’s participation in Nike’s Mata no Peito.

Newman describes the organization as “effectively a Kickstarter for the Brazilian rainforest. They come up with market-based solutions for deforestation. In other words, they’re looking for the root causes of deforestation, and trying to develop projects that address causes of deforestation and some of the impediments to reforestation. Money that is donated gets the projects off the ground, and projects are designed to generate their own offsets, which are then sold to provide continuous financing.”

The card is still relatively new, and is gaining users who will ultimately fund the conservation projects in the Amazon. Newman hopes that users will see the benefit of using the credit card to purchase their necessities and carbon offsets at the same time.

By using the card, not only are consumers offsetting their carbon footprint but they are also helping to fund rainforest preservation without having to change their behavior much beyond choosing which card to use for purchases.

“This is a way to commit to doing something, and it happens automatically, seamlessly,” he said. “You don’t have to worry about the funny rules with cashback cards. Automatic is a really nice way to say I’m making a commitment, this is something I think is important, and I’m using this card as a way to do it.”

Katy Sater was previously a research assistant for Ecosystem Marketplace.