The UN’s Green Climate Fund closed out the year by approving 11 new projects designed to help developing countries mitigate and and adapt to climate change, including an historic $500 million to save forests. 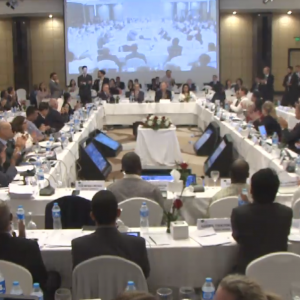 The story first appeared on the Conservation International Blog

5 October 2017 | The fight against climate change just got a half-billion new reasons for hope.

On Monday, the Green Climate Fund (GCF) announced that it had dedicated US$ 500 million to help conserve forests and mangroves — a powerful recognition of nature’s role in solving climate change. Conservation International offered technical advice and analysis to the GCF ahead of the announcement. How will it work? Read on.

What is the Green Climate Fund?

The GCF is a US$ 10 billion fund established by the United Nations that helps developing countries scale up game-changing responses to climate change (think large renewable-energy installations and tropical forest conservation initiatives).

Why is this announcement a big deal?

It’s a big deal because it sends a powerful signal to developing countries that keeping forests standing can come with a powerful financial benefit.

How does protecting forests have a financial benefit?

Among the countless benefits of forests, they absorb carbon dioxide — a greenhouse gas — from the atmosphere on a massive scale. (Because of that, when forests are cleared, they emit carbon back into the atmosphere.) In many cases, the long-term benefits of leaving forests standing have lost out to the short-term gains of clearing them for agriculture, timber or development.

With that in mind, a number of initiatives have sprung up in recent years to encourage countries and other actors to protect their forests in return for financial benefits based on the amount of carbon stored in the trees. The most significant of these initiatives is REDD+ — short for Reducing Emissions from Deforestation and forest Degradation — and the US$ 500 million from GCF could provide a major boost for REDD+.

How much money is this, in context? A lot: A 2016 review estimated that there was a total of US$ 888 million in what is called “results-based finance” for forests.

How could this be a boost for REDD+?

REDD+ has not lived up to its potential — yet — in large part because there is not a fully developed global market for carbon. (There are multiple technical and political reasons for this; for more background on some of these concepts, click here.) The lack of a market discourages investments, which in turn inhibits the development of a market, and so on.

This new funding provides a bit of momentum, says Lina Barrera, senior director of international policy at Conservation International, for REDD+ to reach its full potential and to maximize the potential of forests to combat climate change.

Why do some countries not have access to this finance?

There are numerous technical hurdles that a country must overcome to qualify to enter the REDD+ program — including setting up a national forest monitoring system and measuring the current level of carbon in the country’s forests to gauge change over time. These steps can be difficult and expensive.

The GCF funding, Barrera says, provides a light at the end of the tunnel for countries that want access to REDD+ funding but still have some work to do to qualify for it. In addition to the US$ 500 million for verified results, the GCF has also committed to support REDD+ readiness and implementation efforts.

So how is this funding disbursed?

Countries can apply to sell verified emissions reductions — each one of them representing 1 ton of avoided carbon dioxide emissions — to the GCF, at a price of US$ 5 per ton.

Additionally, countries can earn 2.5% bonus payments if they can verifiably prove that by protecting their forests, they are producing benefits beyond just carbon storage, Barrera said. Such benefits include biodiversity and human livelihoods, among others.

How does this funding get us to a better climate future?

By sending this major signal to forest countries, donors and policymakers, the funding could well change the climate finance landscape and set REDD+ on a stable course.

“We need to keep global warming below 1.5 degrees Celsius,” Barrera said. “This announcement is a recognition of the fact that nature is an essential part of getting there.”

Bruno Vander Velde is CI’s editorial director. He can be reached at bvandervelde@conservation.org.