As an environmental scientist, Tim Male learned how to restore degraded ecosystems. As an elected councilman, he learned how to pay for them. Finally, as an adviser to the Obama White House, he got to see nationally what works, what doesn’t, and why. Here’s why he believes that “pay for success” models can ratchet up restoration and keep down costs. 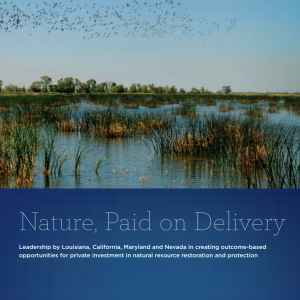 1 April 2019 | In 2017, the US state of Maryland put out a call for proposals to restore 19 miles of degraded stream. They did so because that’s about how much stream the Department of Transportation (DoT) fears it will damage if it goes ahead with planned or projected highway projects.  The DoT, however, won’t pay for the restoration up-front, but will instead “pay for success,” meaning it will pay only when certain milestones are met.

It’s called “pay for success” (PfS), and it looks a lot like mitigation banking, where green entrepreneurs restore patches of degraded countryside in the hope of “banking” environmental credits that they can sell to developers and DoTs down the road. PfS, however, is broader than mitigation banking, and it generally applies to any service that governments contract for – including, now, ecological restoration.

Environmental scientist Tim Male has been following PfS almost since its inception – first as a scientist working in restoration, and then as an elected councilman paying to have it done right, and then as a senior adviser to the Obama administration.

He now runs the Environmental Policy Innovation Center, and in 2017 he took a look at four PfS programs emerging across the United States, and published his findings in a report called “Nature, Paid on Delivery.”

We caught up to him at the Ecological Restoration Business Association’s (ERBA) second annual policy conference, which took place last year in Washington, DC, and the interview is now available on the latest edition of the Bionic Planet podcast.

Bionic Planet is available on iTunes, Radio Public, Stitcher, or directly on this device here: