The four-year-old government of Myanmar came in with a big promise to boost the economy, in part by ramping up agricultural production. But so far, all it’s ramped up is deforestation – destroying some of the most biodiverse land in the world, and then not even planting the farms it had planned to develop. 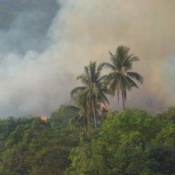 The four-year-old government of Myanmar came in with a big promise to boost the economy, in part by ramping up agricultural production. But so far, all it’s ramped up is deforestation – destroying some of the most biodiverse land in the world, and then not even planting the farms it had planned to develop.

20 March 2015 | When Myanmar President U Thein Sein took office in March 2011, he had big plans for economic reforms. In particular, the new government wanted to promote industrial agricultural development to attract both domestic and foreign investment and to help boost the country’s economy.

Between 2010 and 2013, the land areas awarded for agriculture purposes increased at an unprecedented rate – 170 percent – and this number is likely a conservative one, as it includes only areas allocated by the central government, and not those “provincial, military, and/or non-state authorities” might have given away. To most, it seemed like the old story of short-term economic gain trumping long-term environmental – and economic – stability.

Recent research by Ecosystem Marketplace publisher Forest Trends, however, casts doubt on the efficacy of these efforts. A new report, Commercial Agricultural Expansion in Myanmar, released last week, is the first of its kind to investigate the various ramifications of these shifts in land use in the country. As it turns out, they are backfiring – on more than one level – and it is local forests and the people that live in them and depend on them that are being hit the hardest.

For one, the land that has to be made available for agricultural development is not coming from nowhere. It is coming from the clearing of forest lands – of which each year the country is now losing about 1.15 million acres. And not just any type of forest, but “some of Southeast Asia’s last remaining High Conservation Value Forests.” These are forests that are home to house a large variety of fauna and flora – things on which it is hard to put a dollar value – as opposed to the logged timber on which you certainly can, as trade statistics show: timber exports increased from 2.7 to over 3.3 million m3 in just two years (between 2011 and 2013) and the value of these exports rose from $US 1 billion to $US 1.6 billion.

Whether or not the agriculture sector is growing at the same rate as timber exports is unclear – and actually doubtful. As it turns out, of all the land the government is allocating for industrial agriculture, only a quarter was actually planted with agricultural crops. The Forest Trends report takes a particularly close look at two areas, Kachin State and Tanintharyi region, where plantings are especially low (12 and 19 percent respectively), to investigate the underlying dynamics of this phenomenon.

In Kachin state on the China-Myanmar border, which has long been a focal point in the news as a result of its precarious geographic position, Chinese – and not domestic – business interests are dominating the situation and Chinese demand for agricultural commodities is the main driving factor for the increased area of land being used for commercial agricultural development. In Kachin, 1.4 million acres were designated for commercial agricultural development – but so far less than 175,000 acres have been actually planted.

An important reason for this is that these processes do not have any social safeguards in place, i.e., they do not provide any way to lessen the consequences these changes in land use have for local communities that live in and depend on these forested areas. It therefore probably comes as no surprise that conflicts around land rights have increased hand in hand with the growing allocation of land areas for industrial agriculture development. Communities lose their land and have not legal recourse for claiming it – and with it the base for their subsistence – back.

If the promised and hoped-for economic growth is supposed to happen and hold up, the obvious tension between commercial agricultural development and sustainable management of Myanmar’s forests has to be resolved. For starters, the agencies that oversee both, the Ministry of Environmental Conservation and the Ministry of Agriculture and Irrigation Policy, the report argues, need to have clarified priorities and roles.

In addition, with the logging of these precious trees largely driven by the desire to export, international standards and processes – such as forest certification or the emerging Forest Law, Governance and Trade (FLEGT) Voluntary Partnership Agreement (VPA) – might be able to influence change by trying to address murky/grey areas such as the trade of timber that may have been felled as a result of dubious logging permits.

Anne Thiel is the Communications Manager at Forest Trends. She can be reached at [email protected]