Typhoon Haiyan recently provided a devastating reminder of the destructive power of hurricanes – a destructive power that the people of Monterrey, Mexico know all too well. That’s why they are building an investments in watershed services program designed to shield them from the worst forms of natural disaster destruction and also put a little water in the bank for dry days. 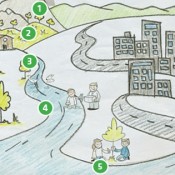 Typhoon Haiyan recently provided a devastating reminder of the destructive power of hurricanes – a destructive power that the people of Monterrey, Mexico know all too well. That’s why they are building an investments in watershed services program designed to shield them from the worst forms of natural disaster destruction and also put a little water in the bank for dry days.

29 November 2013 | During the Atlantic hurricane season of 1988, Hurricane Gilbert tore through the Caribbean and the Gulf of Mexico, making landfall first on the Yucatí¡n Peninsula and then moving into mainland Mexico – vacillating all the while between Category 3 and 5 on the Saffir-Simpson Hurricane Wind Scale.

Monterrey, Mexico was one of the cities in Hurricane Gilbert’s path, and it was ravaged by floods and landslides that left more than 280 people dead and 1,000 families homeless.

Twenty two years later, Hurricane Alex brought more floods and destruction, but since then the challenge has been drought – highlighting the fact that the 4 million people in this mountainous semi-arid city face more than just hurricaines: they face wildly-fluctuating water supplies made even less predictable by climate change and rapidly-expanding industrial activities. That fluctuation, in turn, threatens the economy that is partly driving it – and therein lies at least a partial solution.

Just over 3 years ago, a consortium of organizations, companies and government agencies launched the Fondo de Agua Metropolitano de Monterrey (Metropolitan Water Fund Monterrey or FAMM). It aims to ensure a healthy supply of water to Monterrey through investment in watershed ecosystems while also working to reduce the risks of flood disasters.

This initiative was created by The Nature Conservancy (TNC), the Inter-American Development Bank (IDB), the FEMSA Foundation and the Global Environment Facility (GEF). The fund is part of the Alianza Latinoamericana de Fondos de Agua (Latin American Alliance Water Fund), which is comprised of these organizations and seeks to explore the use of water funds in Latin America and benefit the local people and ecosystems. The Alliance was launched in June 2011 and, since then, has invested over $27 million to the creation and implementation of 32 water funds in Latin American countries including Ecuador, Colombia, Peru, Brazil and Mexico. The Alliance has conserved more than 7 million hectares in watersheds, which has the potential to benefit some 50 million people.

Water funds are an investment in watershed services (IWS) mechanism program. Individuals and organizations are compensated using different methods for protecting watersheds. The concept grew in popularity in Mexico during the 2000s, particularly with the National Program for Hydrological Environmental Services (PSAH) that began in 2003 with a focus on watershed protection.  Several  independent projects  with funding mechanisms have emerged as well, increasing the impact of IWS.  The Alliance is working on two of them.  One is FAMM in Monterrey and the other was established in the state of Chiapas in 2011 under the name of   Semilla de Agua (Water Seed Fund), with an area of potential impact of more than 2 million hectares and about 2.5 million beneficiaries.

FAMM took the form of successful IWS models in the region. The group decided to implement the fund as a tool for long-term preservation of the city’s water supply. Monterrey receives 60% of its water from the San Juan Basin when it flows through Mexico’s National Park, Cumbres de Monterrey (NMCP). The relationship between the upstream basins and the populations downstream seemed to be the key between conserving the watershed. The water fund generated the most promising results in terms of recognizing that link and providing a solution.

The water fund operates through investments in a fund for the sole purpose of preserving and restoring the watershed. This is done through conservation actions to natural areas that provide environmental services such as water flow, retention, filtration and water supply to city dwellers.  It was crucial that the funds’ developers followed good practice in its design and implementation using sound scientific data and planning tools.

Within FAMM, there are four key committees: Institutional Practices Committee, Fundraising Committee, the Technical Committee and the Conservation Committee. Each of these committees is made up of specialists from more than 60 institutions. With the project in its planning stage, developers will hear from an assortment of individuals and institutions.

The committees break down the development activities and divide them among the group. Activities include flood mitigation through reforestation, protection of flow, improving infiltration (capture 20% of rainwater), soil protection, water culture development, awareness campaigns and training, and collaboration with levels of government to bring in the necessary resources.

How is it Funded?

The payers in an IWS program are the water users that rely on the services of the watershed. Large water users can make contributions that will preserve the basin and ensure the continuation of services they depend on for business and other matters. As of right now, 70 million pesos or US $5 million has been contributed to FAMM. The conservation nonprofits, Pronatura Noreste and CONAFOR have helped develop IWS programs in Latin America and are working on FAMM as well. This initiative will promote sustainable economic development in the Monterrey region as well as restoration and conservation that will boost residents’ quality of life.

The PWS programs FAMM is modeled after have been operational in the region for over three years and span 3,500 hectares. That includes parts of the San Juan River Basin and the Cumbres National Park with 124 participants, including both private landowners and ejidatarios. Ejidos are agricultural land grants where farmers work on communal property. These participants undergo a detailed selection process. Forestry technicians visit the premises and perform a technical study evaluating the current conditions of the land. They study elements such as deforestation, plague, fire and soil quality among others. The contracts signed between landowners or dwellers and the project developers include any special conditions concerning the land. Agreements can also include maintenance of the land for an annual fee. CONAFOR works with the locals on reforestation and conservation initiatives, which can help build trusting relationships between the project and the local populations.

“Landowners now know that their land and the environmental services it provides are worth something,” said biologist Magdalena Rovalo CEO of Pronatura Noreste.  “The challenges of the initiative now are to identify more communities that are willing to commit to the program as well as incorporate more land and trees into it, which can be a time consuming process.”

“We know we cannot prevent hurricanes, so we need to have better planning for natural disasters, and part of that plan is informing the public to be more prepared and protect soils through reforestation,” said Colin Herron Strategic Coordinator Water Funds of Mexico and Northern Central America TNC. “Reforestation is a key part of the project as it is a natural mechanism against climate change, at least on a local scale.”

In fact, a first step of the project was to increase the reforestation capacity in NMCP – the Cumbres National Park. Mexico’s National Commission of Natural Protected Areas says germplasm – an organic tissue that can be used to produce a new plant with the same genetic makeup – must be used to reforest a protected area. This turned out to be a challenge because the number of seedlings produced in a year from which the germplasm would come were low – at 80,000 seedlings.

Reforestation is one of the goals of FAMM that fits into its larger goal which is to reduce – by as much as possible – the catastrophic effects of natural phenomena, like hurricanes, on the population, economy and environment. This is why a big part of FAMM is maintaining the upper part of the basin. The upper basin needs to be in good condition so it’s capable of stopping or acting as a cushion to high water flows during extreme weather events.  Restoring watershed health is essential for storm protection alone, although there are the other motives mentioned like a steady supply of clean water.

The early years of FAMM are crucial. It has to show strong results as well as the ability to keep stakeholders involved in an organization that is permanent and self-sustaining with a long-term vision, said Rodrigo Crespo, Project Manager with the FEMSA Foundation.  He indicated that at this stage, a key step is uniting over the scope of the project and its long-term vision. Executing conservation and monitoring plans, securing agreements with institutions and finding the right tools are the next important steps.  Once these have been accomplished comes the next stage, which is field work. This will strengthen the actions of the early years.  Projects must demonstrate real, measurable effects in areas of maximum impact, as well as make advances in communicating their project to the locals.  In a later stage, where monitoring the projects’ activities will be the primary task, FAMM can seek new mechanisms that will reduce expenses.

FAMM is an ambitious project both in its objectives and in its potential impacts. Its’ success depends on all participants. Developing this project will take up to 20 years of hard work and continuous investment.  But the effort will likely be well worth avoiding the destruction from another Gilbert or Alex.