The current iteration of the US Republican Party is notoriously opposed to climate-change legislation, but there seems to be growing support for programs that tax emissions and funnel the proceeds back to citizens. 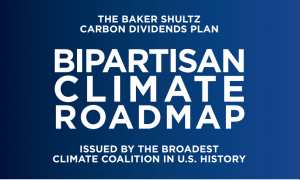 14 February 2020 | JPMorgan Chase and Goldman Sachs this week became the two latest financial behemoths to back a “fee and dividend” approach to reducing greenhouse gas emissions that an organization called the Climate Leadership Council has been advocating since 2017.

The proposal is one of at least two that are gaining momentum in Washington, with the second being the Energy Innovation and Carbon Dividend Act advocated by the Citizens Climate Lobby.

Cap and Trade vs Fee and Dividend

In cap-and-trade, the government establishes a cap on greenhouse-gas emissions and then makes people who exceed the limit purchase either allowances or offsets. Allowances are purchased from the government, while offsets funnel the money into technologies that absorb greenhouse gasses. Cap-and-Trade has the advantage of funneling money into practices that reduce emissions or even remove greenhouse gasses from the atmosphere, but there’s a downside. Namely, it will make fossil-fuel energy more expensive, which means it will drive up energy prices in the short term until we finally transition to cleaner, cheaper sources.

In a “fee and dividend” approach, the government imposes a fee on on greenhouse-gas emissions, but instead of funneling the money into emission-reductions, it sends it back to citizens in the form of a dividend. As a result, people pay into the system based on how much fossil-fuel energy they consume, but but every single citizen gets the same dividend back.

The idea has been around a while, and California already funnels some money from its cap-and-trade program into poor communities.

Diverse Support, Both Industrial and Political

The Climate Leadership Council is a decidedly top-down affair that was launched in 2017 by Republican stalwarts like former Secretaries of State James Baker and George Schultz. It started with a bang and is backed by a diverse array of industry and NGO groups, including five oil and gas supermajors (BP, ConocoPhillips, ExxonMobil, Shell, and Total), the largest solar company in the US (First Solar) and three of the country’s largest environmental NGOs (CI, WRI and WWF).

The Citizens Climate Lobby, on the other hand, is a bottom-up affair launched in 2006 by philanthropist Marshall Saunders. It currently has nearly 600 chapters around the world.

Both groups have had success in building bilateral support for a fee and dividend approach to meeting the climate challenge, although neither’s proposals were included in the gaggle of Republican bills that emerged in the House of Representatives this week.

They’re Back! Global Alliance Rallies Around Republican Plan For Gradually-Rising US Carbon Tax

Analysis: A Price On Carbon Is Neither Liberal Nor Conservative. It’s Just Practical