Every year, human activities cause significant – but often unaccounted – harm to fish and wildlife habitat and the environment. Now a new report from the Environmental Law Institute examines laws and programs that can require monetary or in-kind compensation for these impacts. 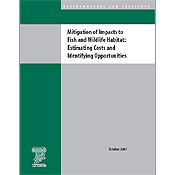 Every year, human activities cause significant – but often unaccounted – harm to fish and wildlife habitat and the environment. Now a new report from the Environmental Law Institute examines laws and programs that can require monetary or in-kind compensation for these impacts.

28 March 2008 | In October, 2007, the Environmental Law Institute (ELI) released Mitigation of Impacts to Fish and Wildlife Habitat: Estimating Costs and Identifying Opportunities, that draws on available data to estimate, for the first time, an annualized dollar amount of damages to habitat and the environment that are captured under the major federal compensatory mitigation programs.

In addition, the report highlights opportunities to use the fifty State Wildlife Action Plans to direct these compensatory mitigation funds in a manner that could support state, regional, or local conservation objectives; and, in so doing, to help conserve fish and wildlife species and biodiversity nationwide and over the long term.

For the most part, funds collected under these federal laws are reactively allocated on a permit-by-permit or case-by-case basis, with minimal regard for how they might be used to piece back together the fabric of the biological landscape. However, a proactive tool has emerged with the potential to address this problem: each of the fifty states is required to develop a State Wildlife Action Plan under federal legislation that established the Wildlife Conservation and Restoration Program and State Wildlife Grants Program.

The plans provide scientific data and identify priorities for conserving fish and wildlife habitat – information that potentially could be used to direct the allocation of compensatory mitigation funds from other programs.

Using the best available data and reasonable assumptions for each program, ELI estimates that the annualized cost of compensatory mitigation conducted under key federal programs nationwide is approximately $3.8 billion. In order to understand fully what this aggregate number represents, it is essential to review the detailed conclusions and methodology laid out in the original report. The following summary describes the program-by-program estimates:

The statute-by-statute breakdown of these mitigation costs is summarized below:

Section 404 of the Clean Water Act

Section 404 of the federal Clean Water Act is the primary mechanism by which activities in wetlands and aquatic resources are regulated. ELI’s dollar estimate for Section 404 compensatory mitigation considers both wetland and stream mitigation. With respect to wetland compensation, the figures were aggregated from disparate data that reflect the inherent variability in mitigation costs due to regional location, the mitigation mechanism (permittee or third-party), and the different methods of mitigation used (such as creation, restoration, enhancement and preservation). The available data for stream compensation are less detailed.

Working within these data constraints, and using FY 2003 as a baseline, ELI’s initial aggregate estimate of wetland mitigation costs across all regions of the country ranged between $2.5 billion and $4.4 billion, with a likely midpoint of approximately $3.4 billion. Adjusting these estimates to account for the probable mix of different methods of wetland mitigation used then reduced the bottom-line range to approximately $1.7 billion to $3.1 billion, with a mid-range estimate of about $2.4 billion. ELI further estimates that the total FY 2003 cost of stream mitigation was between $179 million and $955 million, with a likely mid-point of around $573 million.

Combining the two estimates for wetland and stream mitigation suggests that the total amount spent on aquatic resource mitigation under Section 404 of the Clean Water Act in FY 2003 was between $1.9 billion and $4.0 billion, with a probable midpoint of around $2.95 billion.

Section 10 of the Endangered Species Act

Under Section 10 of the Endangered Species Act (ESA), non-federal entities may receive a permit from the U.S Fish and Wildlife Service or National Marine Fisheries Service for the “take” of listed species, provided that the take is “incidental to, and not the purpose of, the carrying out of an otherwise lawful activity.” These incidental take permits and their associated habitat conservation plans require that permittees minimize and mitigate their impacts to listed species and habitat “to the maximum extent practicable.”

Federal data on mitigation costs associated with Section 10 habitat conservation plans and incidental take permits (HCP/ITPs) are available, although they are not complete. ELI’s estimate for the annualized commitment of funds to compensatory mitigation is based on an examination of the 65 HCP/ITPs approved by FWS in the years 2003 through 2006. These HCP/ITPs required permittees to commit a total of $1,481,345,433 in mitigation expenditures over the duration of the HCP/ITPs, for an average long-term commitment of $370.3 million per year.

Parties responsible for injuries to the environment, such as oil and chemical spills or leaks, may be held liable under one or more federal laws for the cost of removal and remedial actions, as well as the cost to restore the natural environment. Depending on the source and location of the injury, NRDs may be assessed under any of five federal laws: the Comprehensive Environmental Response, Compensation, and Liability Act, the Clean Water Act, the Oil Pollution Act of 1990, the Park System Resources Protection Act, or the National Marine Sanctuaries Act. ELI’s dollar estimates for mitigation required for NRDs include both the costs of injury assessment and restoration.

The data on NRD settlements are relatively complete compared to other programs, which allowed ELI to consider a wide range of years (1997-2005) to produce an annualized average figure. These data, combined with data for a somewhat different range of years for the Oil Spill Liability Trust Fund, suggest that, on average, about $87.7 million was expended annually for natural resource damages under federal programs.

The Federal Energy Regulatory Commission (FERC) issues and renews licenses for more than 1,000 non-federal hydropower projects under the Federal Power Act. To receive an original license, renew an old license, or surrender a license, a hydropower project must comply with conditions designated by FERC, which may include environmental mitigation requirements. The mitigation actions that are mandated under a license typically include a mix of measures intended to prevent harm from occurring and to compensate for harm to fish and wildlife habitat.

The best available data on compensatory mitigation required by hydropower licenses come from Environmental Assessments (EAs) and Environmental Impact Statements (EISs) issued by FERC during the licensing process. During the years 2003 through 2006, FERC issued a total of 70 EAs and final EISs that itemized recommended mitigation measures. Aggregated, these EAs and EISs on average recommended an annual commitment of $210.3 million to compensatory mitigation, including the cost of measures that would be spread out over the lifetime of the licenses.

Federal hydropower projects in the Columbia River Basin must comply with the Northwest Power Act (NWPA) which, in addition to encouraging the development and conservation of electric power, seeks to “protect, mitigate and enhance” fish and wildlife in the Columbia River and its tributaries. Under the NWPA, a Regional Conservation and Electric Power Plan must be developed that considers this goal. The Act also requires the development of a Fish and Wildlife Program, the purpose of which is to enhance fish and wildlife in the Columbia River Basin. The program is developed and implemented by the Pacific Northwest Electric Power and Conservation Council and the Bonneville Power Authority (BPA), and provides funding for specific projects that include protection, mitigation, and enhancement measures.

The vast majority of compensatory mitigation required under federal programs is wetland and stream mitigation under Section 404 of the Clean Water Act. Over $2.9 billion of ELI’s estimated $3.8 billion annual total – over 77 percent of the funds spent on compensatory mitigation – is generated through the mitigation requirements of Section 404 of the Clean Water Act. As a result, any efforts to direct compensation monies toward protecting the critical fish and wildlife habitat identified in the State Wildlife Action Plans would most effectively focus on the Section 404 program.

Efforts to integrate the State Wildlife Action Plans into federally-required mitigation expenditures will necessarily be constrained by existing requirements and policies under each specific statute. Since compensatory mitigation by definition is intended to replace or restore specific resources that have been lost or damaged by a specific action, many federal programs restrict the siting and nature of mitigation projects to the affected area. It will be critical to take such limitations into account when considering whether and how funds could be strategically directed for fish and wildlife conservation purposes.