As part of its efforts to reduce greenhouse gas emissions, Microsoft charges itself an internal carbon fee that it uses to buy offsets around the world.

Here’s a look at the program and the projects. 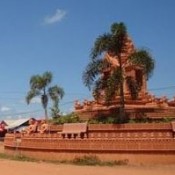 As part of its efforts to reduce greenhouse gas emissions, Microsoft charges itself an internal carbon fee that it uses to buy offsets around the world. Here’s a look at the program and the projects.

30 April 2013 | Microsoft is directing some of the money from its “game-changing” internal carbon fee to fund international carbon offset projects.

The Seattle, Washington-based technology firm implemented the carbon fee in July 2012 as part of its commitment to become carbon neutral, in recognition of the fact that the information and communications technology sector emits 2% of global emissions.

“We are part of the problem, especially when we look at our customers and the proliferation of devices that are emerging and the energy they require, so we need to also be part of the solution,” said Tamara “T.J.” DiCaprio, senior director of carbon and energy, environmental sustainability for Microsoft. DiCaprio announced Microsoft’s new wave of offset purchases at the first ever REDD+ Talks event hosted last week by the Code REDD Campaign, CSR Wire and REDD+ project developer Wildlife Works in Sausalito, California.

Since the implementation of the carbon fee, the company has invested more than $4 million in renewable energy and carbon offset projects around the world.

Microsoft’s “game-changing corporate policy,” as DiCaprio describes it, fits right in with projects to Reduce Emissions from Deforestation and Degradation (REDD+), she said. One project Microsoft is investing in is the Oddar Meanchey forest protection project in Cambodia, in which Terra Global Capital works with local communities to halt deforestation and protect an area of 56,000 hectares of tropical forest. Forest cover in the Oddar Meanchey province is being lost at an average annual rate of 2.1%, the highest in the country.

The company has also chosen to partner with The CarbonNeutral Company to invest in carbon reduction projects that preserve forests and wildlife and generate jobs and fund education.

“As a corporation in a developed country, we can invest in emerging countries, developing countries, to help them develop in a low-carbon economy, which is really the foundation for the Kyoto Protocol,” she said.

There are three pillars to Microsoft’s strategy: be lean, be green, be accountable. Being lean involves reducing the company’s energy use, waste and air travel.

“The first step was really to take a look at our own house, get our own house in order, clean up our own operations,” DiCaprio told attendees at the REDD+ Talks in Sausalito, California last week. “In order to do that, our reduction in carbon emissions had to go to zero and hopefully be net negative when we complete the process.”

Becoming a greener company entails, among other activities, investments in renewable energy and carbon offsets projects. The accountability phase involves charging the company’s 14 business divisions an additional fee to account for their carbon emissions, she said. The carbon price, which was not disclosed, could increase over time.

“The accountability has been amazing,” she said. “It was very important for me to start to talk about carbon in terms of dollars.”

“The impact on the business has been significant,” DiCaprio continued. “The folks are engaged now.”

DiCaprio hopes her company’s efforts can serve as a model for other organizations in putting a price on carbon, collecting the funds, driving accountability throughout the organization and using the funds to support projects, such as the Kasigau Corridor REDD project that aims to protect 500,000 acres of forest under threat in Kenya.

“The world needs our help,” she said. “Microsoft can’t do it alone. We need to be able to distribute these funds out to the organizations and the groups that are making an impact.”

Molly Peters-Stanley is the Associate Director of Ecosystem Marketplace. She can be reached at [email protected]