Most take it as a given that payments for ecosystem services promote good land stewardship, but do they really? A massive project in Uganda aims to answer that by dividing 1400 households into two groups, each of which is being trained in sustainable land use, but only one of which is getting payments. 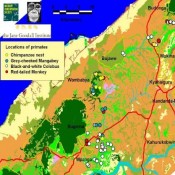 25 May 2012 | Kwamya Julius Nyakoojo has been farming cocoa in Uganda’s Hoima District his entire life, but his farm’s yields aren’t what they used to be – and neither are the prices he receives for the newly-harvested beans. So, a few years back, he began clearing native forest to plant more cocoa trees. That didn’t sit well with the chimpanzees of the surrounding forest. They ended up devouring the fruits of his labor.

It’s a common theme in Uganda, where lush valleys, blue lakes, and stunning mountain vistas deliver ecosystem services that directly support more than 90% of the country’s people and provide a home to more species of primates than any other country on earth. But as cash-strapped farmers like Kwamya ratchet up production, they are coming into conflict with the living ecosystems that support them and the animals living there.

In Uganda, Kwamya’s actions matter, because a whopping 70% of forests are in the hands of private landowners and rural communities, and half of these have been degraded, with 86,000 hectares per year being lost to deforestation. Rural communities are among the key drivers of this degradation, because they harvest forests for building materials, medicine, charcoal, firewood and farming. If this continues, many of the species which Uganda is famous for – including the chimpanzees – may become extinct in the near future.

That’s why Kwamya and other farmers have joined in a massive experiment that goes by an equally massive title: “Developing an Experimental Methodology for Testing the Effectiveness of Payment for Ecosystem Services to Enhance Conservation in Productive Landscapes in Uganda.” Focusing on the Kibaale and Hoima districts of Western Uganda, this experiment aims to test the ability of Payments for Ecosystem Services (PES) to enhance the conservation of Ugandan biodiversity, specifically targeting productive landscapes. Coupled with intensive training in sustainable land-use and PES, residents of these communities are divided into two groups: one that receives payments for avoided deforestation, reforestation, adjusted agricultural activities, forest monitoring, and watershed protection (the “test” group), and one that does not (the “control” group).

Project developers have already used standard modeling procedures to establish baselines in Kibaale and Hoima and formulated two projections: one to predict what will happen with PES, and one to predict what will happen without it. When the pilot ends in April, 2014, the Chimpanzee Sanctuary and Wildlife Conservation Trust (CSWCT) will compare the predictions to the reality. If the results are positive, this hard data will be used to convince private sector investors that PES works.

The four-year pilot project was developed jointly by a rare confluence of actors from government, civil society, the private and nonprofit sectors, and global multilateral organizations – including the Ugandan National Environment Management Authority (NEMA), the CSWCT, the United Nations Environment Program’s Global Environment Facility (UNEP-GEF), and others – each of which had its own goals and objectives.

Specifically, NEMA was looking to increase conservation efforts on private land, while CSWCT was looking to address deforestation threats in areas of declining chimpanzees’ habitat, while UNEP-GEF was looking to test whether PES mechanisms truly deliver measurable biodiversity and livelihood benefits

Working with international scientists from Stanford University in the US, the World Bank and Innovations for Poverty Action (IPA), the project will measure impacts of PES in a sample size of eight sub-counties of Hoima and Kibaale including 1,400 villages. In half of the villages, residents are eligible for payments (treatment group), the others not (control group). Every village will receive capacity building on PES, exposure to forest cover change and climate issues, forest management interventions, and sustainable forest use options. With all of the villages receiving basic capacity building and sensitization, the project can more accurately isolate and measure the impacts of PES on biodiversity and livelihoods.

After capacity building and sensitization, residents of villages eligible for payments can chose to participate or not participate in the PES program. This “test” group is then offered a payment in return for contractually agreed activities. Those that are interested must submit an application and negotiate an individual contract.

These voluntary contracts are unique to each farmer. The farmers discuss the contract elements with project partners and CSWCT, and then it is finalized in a participatory process with landowners through focus groups and community organizations. Before beginning implementation, a contract and evaluation plan will also be created and agreed for each participating farmer. The farmer receives a payment based on forest area conserved and number of hectares reforested. The current upper limit is 35 USD per hectare per year with   seedlings for reforestation of the degraded forests or deforested areas. Cash will be distributed on a yearly basis, starting from the contract sign date.

The project, however, does not attempt to fully address opportunity costs of other activities with payments alone, according to Christine Akello, Senior Legal Officer at NEMA. “We are trying to broaden the entry point for communities by offering many resources, not just one existing resource everybody is targeting,” she says. “We seek to provide options and opportunities for involvement and participation.” The project at its foundation promotes sustainable use, not protection.

Current Progress, Challenges, and Next Steps

In February 2010, UNEP-GEF approved the project and by June of that year, the project steering committee had met and the census of private forest owners in Hoima was complete. Since December 2010, the project has completed stakeholder consultations in 70 villages. Forest assessments have been completed on all participating lands. Sensitization and workshops for leaders in Hoima have resulted in 635 finalized farmer contracts. CSWCT has delivered the first shipment of tree seedlings to participants engaging in reforestation of degraded areas, and will complete seedling distribution in Spring of 2012.

The next steps are to begin implementing contractual obligations. CSWCT and NEMA are providing farmers with technical support to implement Best Management Practices for forest conservation. The impact evaluation scientists will monitor the PES scheme impact by closely following both social and ecological outcomes, ensuring compliance with contractual obligations. The first payments are scheduled to be delivered to the Kyabigambire subcounty on 4 August. Implementation, technical support, and monitoring will continue simultaneously until the project’s close in 2014.

The biggest challenges facing the project include the high expectations from farmers on payment levels, the lack of land tenure on target properties in forest corridors, the ongoing negotiation delays, and engaging additional finance sources. “They have not been clear about how it will perform,” says Kwamya. “There is a hope it will be a solution to our problems, but there are also fears—what trickles down to the farmers is not substantial. It is not enough to persuade somebody to be a conserver of the environment.”

Despite this difficulty, he is diversifying his cocoa farm to raise tree seedlings with technical support and financial compensation. Kwamya says, “Using my example, CSWCT has injected slightly above 5,000 USD into my farm’s operations over the years. “CSWCT also put in knowledge to dissuade me from certain practices, to completely revolutionize my landscape and my way of viewing my environment,” he says. “However the ordinary farmer must have more money to mitigate his needs… If the value that goes down to the farmer is not substantial, PES will still be a zero. It will remain on paper.”

Generating payments which support farmer land-use changes requires more than just public and donor funds. The project’s biggest challenge lies ahead: even if it generates results, it still has to use those results to win over the private sector. NEMA and CSWCT plan to use data generated at the close of the pilot phase to approach private sector buyers in Uganda and internationally with concrete evidence and fact-based projections of social and environmental benefits.
While it will be 2014 at the earliest that this data is generated, private sector interest has already been piqued. In April of 2011, NEMA, CSWCT, Forest Trends, and The Katoomba Group jointly It attracted representatives from local cocoa distributors, national eco-tourism operators, and companies like Tullow Oil Uganda, Hydromax, ESCO Ltd, and BAT Uganda.

What project developers are finding, however, is that it’s very difficult to maintain experimental control when the real world is your Petri dish. Recently, oil has been discovered in the Hoima district of Uganda. This has led to controversial approval of an oil exploration and development project between Tullow Oil Uganda and The Ugandan Ministry of Energy. The areas affected by Tullow Oil project are predominately protected forest reserves in the high-biodiversity value Albertine Rift, Lake Albert Basin—the precise region of the planned PES project.

This adds extra weight to NEMA and CSWCT conservation efforts on private lands. As protected areas in this region become increasingly accessible to international industry, mitigating impacts through voluntary afforestation and reforestation is important to maintain the rich biodiversity in this area. Tullow Oil recognizes this need and has become an active participant in the PES project by joining the Technical Steering Committee and attending PES training workshops.

This is the first project of its kind in the UNEP-GEF portfolio. Never before has there been an effort to implement an experimental methodology to test the effectiveness of a PES scheme. The data on real versus expected results on biodiversity and livelihoods will generate vital information regarding the actual benefits of PES schemes involving rural communities in Uganda. On the national level, NEMA plans to use the experiment’s results to identify the type of conservation scheme best suited to the Ugandan context. The evidence about PES effectiveness will help the government to develop a replication strategy in other areas at risk of deforestation.

On the local level, if this project is successful, it has the potential to generate significant additional and sustainable financing for biodiversity conservation post-2014. This could change smallholder views to forest conservation as a livelihood opportunity.

And as for Nyakoojo? He’s already benefitting from the project. His previously unproductive cocoa plantation is now a demonstration landscape in environmental protection. He continues to produce cereals, bananas, and keeps goat and cattle, using manure management to minimize environmental impacts. He gives tours to community members involved in the PES project so they can view the potential of PES. Project developers hope that by 2014, smallholders and the private sector alike will be able to view not just the potential of PES in western Uganda, but the impacts as evidenced by this initiative.