Remote sensing is a critical but expensive tool for verifying and validating the impact of land-use improvement projects, especially when using airplanes and other low-flying machines. Environmental consultant Steve Apfelbaum, however, says he’s found a way to deliver cost-effective surveillance using 1970s technology. 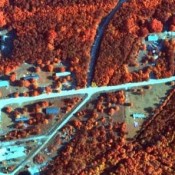 Remote sensing is a critical but expensive tool for verifying and validating the impact of land-use improvement projects, especially when using airplanes and other low-flying machines. Environmental consultant Steve Apfelbaum, however, says he’s found a way to deliver cost-effective surveillance using 1970s technology.

18 February 2013 | Steve Apfelbaum knew the technology existed. He’d even tested it himself in the 1970s – but only with the permission of the US Department of Defense.

The airborne camera was, he knew, the perfect tool for tracking and surveying the kinds of changes in land use that he was looking for as chairman and chief ecologist for Applied Ecological Systems (AES), an ecological consulting firm that provides scientific solutions to land-use problems. But it also utilized remote-sensing technologies that he feared would never be licensed for civilian use – until four years ago, when he read about the Leica RCD30.

Like the model he tested in the 1970s, this one is also a military tool, primarily deployed for surveillance work in Iraq and Afghanistan. However, Apfelbaum wasn’t about to let that stop him. He approached the producers with a different proposal: how about opening up the cameras for science? His persistence paid off; and AES was ultimately able to test and compare these quality cameras from two manufacturers.

In the end, AES decided to jointly purchase a single digital imaging camera from Leica Geosystems with Aryes Associates. The camera takes pictures both in color and using near-infrared imagery. These capabilities, combined with resolutions as high as 1 inch, means that the Leica RCD30 can be used for a variety of ecological projects – from measuring and mapping plant species disease outbreaks and amount of invasive spreading, to even identifying water quality and erosion issues in clear bodies of water. The work can be accomplished under most weather conditions; while near-infrared imagery is capable of being used in low light and cloudy conditions, this is often a key limiting factor for color imagery.

To utilize the camera, the two companies had to purchase their own plane, certified with a camera-sized hole so that it can take pictures from the bottom of the aircraft. Since the plane was custom-built, they made sure it was capable of flying beneath the clouds – a sharp difference from most commercial planes, which fly high and fast in order to produce more volume of digital images.

AES stresses that its plane and camera are ideally suited for research – and if it couldn’t get any better, they also argue that the cost is cheaper than most industry alternatives. Expenses are linked closely to resolution, with 1-2 inch resolutions costing a couple of hundred dollars less than leading competitors.

While the camera has come a long way from its military purposes in the 70’s, it has not been completely dissociated with its beginnings. Currently, the companies need Department of State permission for any projects taking place outside of the United States. Apfelbaum, however, doesn’t believe this permission will be difficult to obtain and hopes to see AES’s technology expand beyond the borders. He believes it could prove a unique addition to the remote sensing options available for current researchers studying forest carbon offsets and other REDD-related activities in tropical countries. In an ideal world, Apfelbaum would buy another camera and set up an international base to meet increased demand – but for now, he’s content with merely spreading the word.