The Southeast Louisiana Flood Protection Authority – East (SLFPAE) has pursued legal action against 97 oil and gas companies for damages to Louisiana’s coast.  In an interview with Harry Shearer, SLFPAE vice president John Barry offers big-picture insight into the factors degrading the coast and driving the suit. 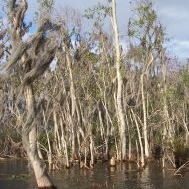 The Southeast Louisiana Flood Protection Authority – East (SLFPAE) has pursued legal action against 97 oil and gas companies for damages to Louisiana’s coast. In an interview with Harry Shearer, SLFPAE vice president John Barry offers big-picture insight into the factors degrading the coast and driving the suit.

12 August 2013 | Author John Barry is best known for his eminently readable accounts of scientific advances, while humorist Harry Shearer is best known for his improve and voice acting skills. Barry, however, is also vice president of the Southeast Louisiana Flood Protection Authority – East, (SLFPAE) which was created after Hurricane Katrina to protect the east bank of the Mississippi River in the greater New Orleans area, while Shearer also hosts Le Show, a weekly syndicated public radio show often found on NPR stations.

The SLFPAE is the levee authority that’s suing Chevron, Exxon Mobil and 95 other oil and gas companies over wetland degradation along Louisiana’s Gulf Coast, and Le Show has been blending hard news, satire, and commentary for 30 years. It should come as no surprise, then, that Shearer’s interviews with Barry over the years provide a very clear and understandable insight into the role of New Orleans in the US economy, the interconnectedness of US waterways, and how this lawsuit has been brewing for some time.

To begin with, Barry pointed out in the August 4 show, no one disputes the damage oil companies have done to the wetlands.

“It’s a fact which they admit,” Barry says. “Chris John, who runs the Mid-Continent Oil and Gas Association, conceded that we are, quote, ‘partly responsible’. Unquote. They know that. The issue is who pays to fix it.”

The degradation to these wetlands means Louisiana is losing the coastal wetlands that have long protected the coast from hurricanes and slow erosion. The 1900 square feet of land loss helped to absorb a hurricane’s energy and reduce damage from the storm surge.

As Barry points out, a number of factors are contributing to the land loss. Related to the energy industry, the 10,000 miles of canals and pipelines that these companies install allow saltwater in, which kills plants and causes soil to melt away into the ocean. The majority of companies were permitted to dredge the canals so long as they restored and maintained them.

Dams built along the Missouri River, which flows into the Mississippi, also contribute to the land loss. Before these dams were built, deposits of sediment replenished Louisiana’s coastal lands. But the dams prevent a lot of sediment from flowing down the river. The dams provide flood protection, hydroelectric power and irrigation to the Midwestern and High Plains states, but they also contribute to Louisiana’s vulnerability to weather, Barry says. Jetties built for the shipping industry also encumber the land replenishment process by carrying sediment out into the Gulf. Previously, the sediment had led to huge sandbars that blocked the Mississippi River system from the ocean hindering the industry. Barry points out that 60% of the nation’s grain exports travel the Mississippi and, without the jetties, this wouldn’t be possible.

Barry and the SLFPAE would like to achieve 500-year storm protection for New Orleans. The current system provides 100-year protection, which is the lowest standard in the developed world. The Dutch, British and Japanese have 10,000 year protection standards, Barry says, with cows receiving 100 year protection.

To achieve this will require funds exceeding New Orleans’ capacity, Barry says. Because the changes made to the waterway benefit the entire nation economically but have also contributed to Louisiana’s land loss and increased exposure to hurricane risk, Barry believes the state’s vulnerability is a national issue.

“We import and export and distribute all over the country through the Mississippi River system, so we think there is a responsibility for the nation to take care of it,” he says.

They also think the oil and gas companies should do their part since a large chunk of the responsibility belongs to them, which is why the state entity is suing.

The SLFPAE decided to sue after comparing their responsibility of protecting southeast Louisiana from flooding to lawsuits against tobacco companies. In the suits against the cigarette companies, individuals that smoked and developed cancer couldn’t sue and win because they had been warned smoking causes cancer. But states that had to pay enormous medical bills from patients on Medicaid that had cancer from smoking were able to sue tobacco companies and win. The states argued they didn’t have the choice not to smoke and there was enough proof that the cancer or illness had been caused by smoking.

And Barry found this situation similar to what the SLFPAE was facing in Louisiana. Their obligation to residents to create a secure flood protection system was compromised by the loss of this coastal land. And this land loss was partly caused by oil and gas companies.

“It seemed logical that the industry which was responsible for a significant part of the land loss, frankly might be a target,” Barry says.

According to Barry, the energy companies agreed and signed off on a study that allocated 36% of statewide land loss to them.

The case was filed in state court. The SLFPAE are using a provision in Louisiana’s civil law called “servitude of drain,” which means a neighbor cannot send more water from their property onto someone else’s property. The authority claims the oil and gas industries have violated this term. By ruining the marshes, they have allowed more water in and increased the storm surges against the levee system.

“We want the oil and gas companies to stop sending more water our way and either do what they already promised to do in written agreements when they got permits to dredge these canals, or pay us some money so we can build better flood protection,” Barry says.

Louisiana’s political establishment has not been particularly supportive of the lawsuit thus far.

While legislators agree a primary goal of theirs is to protect the public from hurricanes, they disagree on how this should be done. The SLFPAE came to the decision that the lawsuit was the best way to move forward with rebuilding the coast and providing the best possible storm protection for New Orleans. But Barry says the oil and gas politics of Louisiana are complicating the situation.

“To the extent that Republican or Democratic politics has gotten into it, that’s very unfortunate,” says Barry. “I guess the oil industry campaign contributions and things like that is a factor.”

Governor Bobby Jindal demanded the authority drop the lawsuit arguing it would undermine implementation of the coastal protection and restoration Master Plan. Jindal also claims the levee board needed his approval before they could hire attorneys.

Barry says they didn’t need the governor’s sign off and when they did formally hire a lawyer, the Attorney General approved the contract. As for the state’s Master Plan, Barry says the outcome of the lawsuit will comply with the Plan.

Barry does point out that the decision to pursue the lawsuit was unanimous despite the political diversity of the board.

“This has nothing to do with partisan politics, nothing. This has to do solely with protecting people’s lives,” he says.

Most Louisiana legislators weren’t quick to comment on the lawsuit. Most are taking a wait-and see approach, Barry says. Mary Landrieu, a Louisiana senator, didn’t specifically endorse the lawsuit but said coastal restoration should be fought for everywhere including in the courts. Steve Scalise, a congressman, perhaps reacted the most negatively claiming the cost of paying the suit’s lawyers will come out of funds that would have gone directly to flood protection even if the suit is dropped.

Barry doesn’t argue the suit is expensive. But the lawyers have already taken a risk by working on the case for nearly a year before being officially hired in July and will be compensated reasonably, he says.
And politics could force the withdrawal of the lawsuit. The SLFPAE is a government entity so the state government could refuse to re-appoint Barry and other board members or just dissolve the authority entirely.

But Barry says public support is strong which is why he believes the case will proceed. Also the fact that nobody is denying the oil and gas industry did cause the damage to Louisiana’s coast is a strong point for the suit.

“It comes down really to a simple choice,” he says. “Do you want to protect the oil companies from having to keep their written word, agreements they made, and make them obey the law, or do you want to protect people’s lives and property from hurricanes? It is really that simple. The lawsuit should continue and let the courts decide.”

The board will meet next on August 15th at a public meeting in New Orleans. Garret Graves-the head of the state authority, CPRA, (Coastal Protection and Restoration Authority) and a solid opponent of the lawsuit is expected to attend.

Listen to the Full Interview

This is the fourth in a series of stories focusing on the economics of ecosystem protection along Louisiana’s Gulf Coast.

Part Four Louisiana’s Wetlands: Why We Need Them, And Why Oil Companies Aren’t Alone On The Hot Seat, focuses on factors degrading the coast and driving the lawsuit in a Harry Shearer interview with SLFPAE vice president John Barry.