The Natural Capital Declaration aims to push environmental risks and rewards onto corporate balance sheets in an effort to promote responsible stewardship of natural resources.  It has the backing of 39 financial institutions, and many of them are meeting in London on Thursday to explore ways of turning the declaration into deeds. 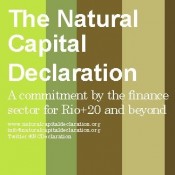 26 July 2012 | Andrew Mitchell thinks all conservationists have something to learn from a Medieval Danish monarch named Canute the Great.

“Legend has it that King Canute came to believe that he was so powerful that even the sea would obey his command,” says Mitchell – the Oxford zoologist who founded the Global Canopy Programme and launched the Forest Footprint Disclosure Project (FFDP) last year.

“One day, Canute asked his courtiers to carry his throne down to the seashore,” says Mitchell. “Then, he held up his hand as if to say, ‘Stop’, because he believed he could hold back the tide.”

In an alternate version of the same tale, Canute wanted to demonstrate the importance of knowing one’s limitations, but both versions end with the tide ignoring and then enveloping the king – just as the short-term economy ignores and overwhelms long-term sustainable investing.

“In conservation, it’s more like a tsunami than a tide,” says Mitchell. “It’s this massive, unpredictable pool of money sloshing around the world, funding destructive but profitable projects, and we like to think we can hold it back by just putting up our hands and saying, ‘This is wrong.’”

That approach might make people feel good, but it hasn’t done anything to end deforestation, climate change, or even littering – at least not on a global scale. So Mitchell spearheaded the creation of the Natural Capital Declaration, which is the latest in a long series of efforts designed to combat environmental degradation by embedding its true cost in the cost of production. He kicked it off two years ago, and quickly found that Brazilian education group Fundaçí£o Getíºlio Vargas (the Getíºlio Vargas Foundation) and the United Nations Environment Program’s Financing Initiative (UNEP FI) were both working on something similar.

The three teamed up and released the Declaration in the first quarter of this year, and in June it was endorsed by the CEOs of 39 banks, investors, and insurers at the United Nations Conference on Sustainable Development (Rio +20) in Rio de Janiero. Many of the signatories are meeting in London today to refine a “roadmap” for implementing the declaration.

The Declaration itself is a fairly straightforward two-page statement divided into two parts. The first part is arguably the most significant and calls on governments to recognize environmental degradation as a business risk that will impact companies’ bottom lines. If that happens, it will be easier to make the case that companies have a fiduciary responsibility to account for, disclose, and ultimately mitigate those risks. The second part is a commitment on the part of signatories to take natural capital into account when making their investment decisions, much as the Equator Principles, which incorporate environmental and social risk into lending decisions for project finance in the developing world.

According to the most recent figures, 85% of project finance now follows the Equator Principles. Unfortunately, only 5% of global lending is project finance, and the International Financing Corporation (IFC) is looking for ways to expand that.

The roadmap, which is being reviewed today, is a more substantial 30-page document that summarizes the literature to date and offers more detail on how companies can begin accounting for natural capital. It lays out a four-step process that begins with companies understanding why disclosure is so important, then progressing into a development phase where they consider ways of embedding the considerations in products and services they offer, then moves into a disclosure phase, and finally culminates with an accounting phase where environmental assets and liabilities are reflected in a company’s P&L – much as Puma already does.

The Measure of Success

“Today, the share prices go up when companies convert natural capital into timber and other products,” says Mitchell. “You make lots of money from doing that, so the investment signal is, ‘Hey, let’s give ‘em plenty of money! We’re gonna do well out of that,’ whereas companies that are trying to follow a green path are finding it very difficult.”

Although that outcome is years away, supporters believe the simple act of documenting exposure will cause companies to reduce it.

“It’s a commonly-said slogan that measurement leads to management, but it’s true,” says Paul Simpson, CEO of the Carbon Disclosure Project (CDP). That initiative was launched in 2003 by institutional investors looking to promote transparent carbon accounting, and is in the process of merging with Global Canopy’s own FFP. Both initiatives harness the clout of institutional shareholders to get companies to come clean on their greenhouse gas emissions and their impacts on deforestation, and Simpson says the Declaration simply builds on that success.

“We’ve seen hundreds if not thousands of companies that, as they measure their carbon emissions, identify inefficiencies in the company,” he says. “They identify, for example, wasted energy – which means wasted costs – and they need to become more efficient to drive out waste.”

“More and more companies are paying attention to the risks that they and their financial institutions face if they do not adequately take account of how their investments or projects impact natural resources and ecosystems,” he says. “The most obvious example of that, of course, is water.”

The Declaration seeks to activate the ideas presented in UNEP FI’s 2005 Freshfields Report, which concluded that “integrating ESG (environmental, social and governance) considerations into an investment analysis so as to more reliably predict financial performance is clearly permissible and is arguably required” in the jurisdictions it surveyed, and it flows from existing efforts like the World Bank’s Wealth Accounting and Valuation of Ecosystem Services (WAVES) initiative, which promotes national-level accounting of ecosystem services.

An EPA study done in 1998 found that approximately 75% of US publicly traded companies had failed to adequately disclose the existence of environmental legal proceedings in their SEC registration filings.

“I would bet the percentage wouldn’t be that different if the EPA conducted a similar study in 2012,” Truty says. “For the NCD to really be effective, its mandates and guidance have be clear and as user-friendly as possible. This will not be an easy task due to the complexity of valuing ecosystem services and biodiversity – and the interdisciplinary expertise that will be required to effectively accomplish this task.”

Michael Mainelli is more succinct. He’s the executive director of the Z/Yen think tank and co-author of “The Price of Fish”.

“This is all part of the trend towards integrated reporting, which sounds great because no one can argue against transparency and reporting,” he says. “The trouble is that crap information is crap, and ‘integrated’ is often just a fancy word for putting up more and more information.”

If accountants start counting before scientists and experienced auditors finish measuring, he says, then natural capital accounting will only do for the environment what derivatives accounting did for the housing bubble.

“We accountants couldn’t get the financial crisis right, in part because most of us didn’t really know what a credit default swap was,” he says. “Why the hell should we believe we’re going to get environmental accounting – which is infinitely more complex – right?”

He also sees a very real danger of the Big Four accounting firms jumping in with nifty-sounding products and processes that add no real disclosure value and even sweep aside work already done by non-governmental organizations and carbon-accounting firms.

Mitchell says the risks are real, and emphasizes that the Declaration aims to harness rather than replace efforts already underway.

“This discussion is taking place in multiple paths,” he says. “One of the things we want to do is to help make sure they’re speaking the same language, and that’s what the roadmap is all about.”