While the Trump administration purges all mention of climate change at the federal level, state legislators from eight US states have introduced bills calling for a price on carbon, and a ninth state has bills in the drafting stage while three states have bills in the works. 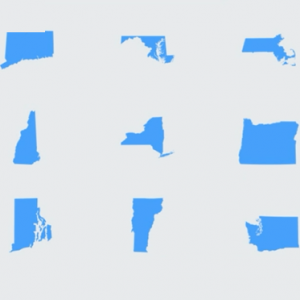 31 January 2018 | “With the current federal administration, it is up to states to coordinate together and take action,” said State Sen Kevin Ranker (D, Orcas) of Washington State today – echoing a refrain we first began hearing within hours of Donald Trump’s election as president of the United States.

But now, says Ranker, the refrain is yielding tangible results.

He was introducing the Carbon Costs Coalition, which is comprised of state legislators from nine US states working to implement carbon pricing built around common principles of equity in policy proposals, developing market-based solutions, creating resilient local and regional economies, and improving public health.

The nine states are Connecticut, Maryland, Massachusetts, New Hampshire, New York, Oregon, Rhode Island, Vermont, and Washington, eight of which have seen legislation drafted and one of which (Maryland) has legislation in the works. Seven of the states belong to the Regional Greenhouse Gas Initiative (RGGI), which is a cap-and-trade program that covers only the power sector. Legislators from three other states are also discussing joining.

The effort is being spearheaded by the National Caucus of Environmental Legislators (NCEL), and has been in the works for two years, Ranker said.

Although each of the states has carbon pricing legislation in the works, the bills take different approaches and are at different states of development.

Rep Jennifer Benson (D, Middlesex), of Massachusetts, for example, has introduced a bill that’s similar to the carbon tax proposed by prominent Republicans a year ago. Hers calls for a $20-per-ton carbon “fee” that rises $5 per year until it gets to $40 per ton, with 20 percent of the revenue going to green infrastructure programs and 80 percent going directly to households and employers.

She pointed out that Massachusetts already committed a decade ago to reducing its greenhouse-gas emissions 25 percent by 2020 and 80 percent by 2050.

Oregon State Sen Michael Dembrow (D, Portland), on the other hand, says his state is just weeks away from passing a cap-and-trade bill – which he calls “cap and invest” – which will link to the Western Climate Initiative that began in California that already includes Ontario and Québec.

He emphasized the inclusion of indigenous and low-income people in the process.

“We’ve designed a program that directs at least 60 percent of climate mitigation and resiliency projects to benefit impacted communities,” he said. “In fact, representatives of impacted communities, including tribes, are the largest block in our overarching program advisory committee.”

Rep Aaron Regunberg (D, Providence) of Rhode Island sponsored a carbon pricing bill that was shelved last May, but he hopes to see it revived this year – for reasons both altruistic and economic.

Specifically, he said, his state produces no fossil fuels and is “dependent on an out-of-state volatile commodity”.

Rep Jonathan Steinberg (D, Westport) of Connecticut and Delegate David Fraser-Hidalgo (D, Montgomery County) of Maryland both focused on public health, while Sen Kevin Parker (D, Brooklyn) of New York and Rep Sarah Copeland-Hanzas (D, Bradford) of Vermont both emphasized the need to share revenues with those living in poverty, especially as a counterbalance to possible higher fuel prices.

Senators Rankor and Dembrow both emphasized the need to include forest and marshland restoration in their carbon pricing initiatives.