Privately-owned forests across the southern United States control erosion and ensure clean supplies of freshwater, but they are also disappearing at alarming rates.  The Nature Conservancy believes carbon finance can help reverse that trend, and today they took a giant step towards making it happen. 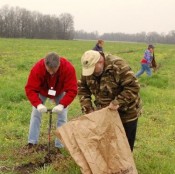 14 June 2012 | BATON ROUGE | Louisiana | The next time you fly over northeast Louisiana, you may see the remnants of thick forests that once supported waterways and habitat across the state. If the flight you’re on is with Delta Airlines, you might even be helping to bring the forests back.

That’s because some Delta passengers who choose the carbon-neutral option contributed to the creation of the Tensas River Basin Forest Carbon Project in Franklin Parish, Louisiana – one of two forest-carbon projects that were registered with the Verified Carbon Standard (VCS) today. The other – the Bayou Bartholomew Project in Morehouse Parish – gets the bulk of its funding from Recreational Equipment, Inc. (REI).

Both projects were spearheaded by The Nature Conservancy (TNC), designed with the help of TerraCarbon, LLC and validated by accredited third-party auditor Rainforest Alliance to meet VCS guidelines for forest carbon projects.   They have now been registered through VCS on the Markit Environmental Registry and VCS Project Database, but won’t begin issuing credits once the trees have grown and been measured.

“Historically in this region, deforestation has left islands of remnant forests surrounded by a sea of agriculture,” says Richard Martin, who is the Director of Conservation for TNC in Louisiana.

That “sea” is expanding across the US south, and the World Resources Institute (WRI) projects that 31 million hectares, or an area the size of North Carolina, will be lost to development between 1992 and 2040 if current trends continue.

The TNC  projects will restore blocks of forest by connecting fragments of existing forests and reforesting on lands previously used for agriculture. Re-connecting the forests will not only reduce carbon emissions but will also help preserve the area’s biodiversity and as prevent nutrient run-off and sediment pollution from farming flow into the water. Based on conservation standards put into place by TNC, the land will remain forested and protected from development.

“These two river basins also host some of the most biologically important freshwater ecosystems in the Southeast,” Martin says. “These efforts create important habitat and travel corridors for species like the federally-threatened Louisiana Black Bear and migratory birds.”

“This is an important milestone for combating carbon pollution through forest conservation,” said Greg Fishbein, TNC’s Managing Director for Forest Carbon. “Projects like these demonstrate a commitment by the private sector to reduce their net emissions using carbon offsets that meet rigorous third-party standards and transparent auditing procedures.”

Five Years in the Making

Both projects have taken years to develop and will take decades to yield carbon credits.

TNC purchased the 212.1 hectare Tensas River Basin property in 2007, in part with a $1 million grant from Delta Air Lines.   The carbon project area covers just the 164.5 hectares that had been degraded, and the project began with new trees being planted in 2008. They spent much of the intervening years monitoring the seedlings and working out legal arrangements.   Part of the land was later purchased by a local farmer who plans to use it for sustainable outdoor activities, but TNC retains ownership of a conservation easement to protect the forest carbon stocks and biodiversity, and to prevent future development on the property.

TNC purchased the Bayou Bartholomew property in 2009, and the plan is to restoring the land and then sell it to the state for integration into the Chemin-a-Haut State Park.   Much of the funding for this came from Recreational Equipment, Inc. (REI) which will hopes to one day earn carbon credits from the project.

The carbon project area covers just 60% of the 100-hectare property, because the rest was already forested.   TNC hopes to generate 34,037 tons of CO2 reductions (or Verified Carbon Units) over 64 years, but that won’t happen until the trees are grown and measured.

The US South can Protect its Water by Paying to Protect its Forests
Beyond Timber: New Economic Opportunities for Southern US Forests