Voluntary REDD projects are actively protecting more than 14 million hectares of endangered forest, but most multilateral funding looks destined for countries with no history of REDD and no local expertise. This makes sense from a capacity-building perspective, but is it the right approach? 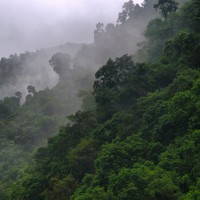 Voluntary REDD projects are actively protecting more than 14 million hectares of endangered forest, but most multilateral funding looks destined for countries with no history of REDD and no local expertise. This makes sense from a capacity-building perspective, but is it the right approach?

NOTE: This story originally appeared on the Huffington Post, where Forest Trends is participating in the Social Entrepreneurs’ challenge. You can view the original here. If you’d like to see more of this sort of content, feel free to support us in the challenge here.

23 October 2013 |For three years now, the people of Kenya’s Kasigau Corridor have been protecting 500,000 acres of endangered dryland forest to prevent 54 million tons of carbon dioxide from soaring into the atmosphere. That’s good for all of us, and as a reward they hope to earn REDD+ (reduced emissions from deforestation and degradation) carbon offsets for keeping greenhouse gasses locked in trees.

Our research shows they’re far from alone. Voluntary carbon projects like these are actively protecting more than 14 million hectares of endangered forests around the world (see “Leveraging the Landscape: State of the Forest Carbon Market“) — a figure that has certainly grown in the past year.

Not only are these private-sector actors protecting millions of hectares of endangered forest, but they are doing so in a way that creates rigorous methods for measuring the amount of carbon captured in forests — methods that others can learn from and implement themselves.

And that, in fact, is exactly what’s happening, with state and regional governments around the world harvesting lessons learned in the voluntary carbon markets to develop their own home-grown programs (a trend we identified in “Bringing it Home: Taking Stock of Government Engagement with the Voluntary Carbon Market“).

So, why are these green-minded entrepreneurs risking hundreds of millions of dollars to save the forest and develop new methods that the rest of us can use? Partly because governments told them to — as Conservation International (CI) highlighted in a September white paper called “REDD+ Market: Sending Out an SOS.”

Drawing on research from our Ecosystem Marketplace initiative and elsewhere, CI recounts in clear language how governments signaled green-minded entrepreneurs that they’d be rewarded for taking action on climate change by saving endangered forest, but how these same governments are now leaving some of the most productive projects in limbo.

The Pact
The paper shows how the private sector began stepping up as early as 2007, when the United Nations Framework Convention on Climate Change (UNFCCC) formally recognized the idea of creating a REDD mechanism. It explains how entrepreneurs ramped up their activities after the 2009 Copenhagen Accord and federal cap and trade legislation in the US promised support for REDD+, which meant that entrepreneurs who developed REDD projects would be able to sell their offsets into government programs iwhen those programs materialized. It also offers this summary of results so far, based just a handful of projects:

What REDD Has Wrought

Beyond the three big projects highlighted above, the paper points to a review of 41 projects that created thousands of jobs, built schools, and funded scholarships. It points, in other words, to a mechanism that is working — and is delivering results with limited resources from voluntary buyers.

And now governments are finally stepping up, with more than $30 billion in “fast-start” financing (as tracked by the World Resources Institute, our own REDDX initiative, and others) for projects that get rolling early. Almost none of that funding, however, is flowing to projects that are already rolling and have already delivered results. Instead, it’s going mostly to new pilots that have little transparency and no track record whatsoever.

It’s a problem we’ve covered extensively in the past, and one that CI illustrates with this chart, showing where World Bank money being deployed under the Forest Carbon Partnership Facility (FCPF) is going. 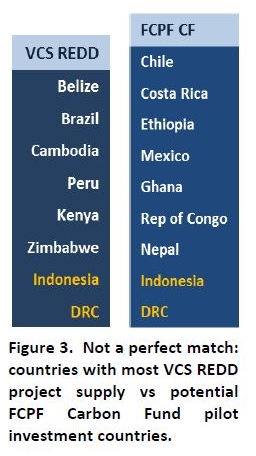 To be fair, the FCPF and other such funds weren’t created to support small, individual pilots, but rather to support national-level accounting mechanisms. That’s well and good, but those small, individual projects add up to a lot of forest already saved and scores of important lessons already learned, and countries that have nurtured them are in danger of being short-changed.

Voluntary carbon projects have already earned the trust of US companies like Microsoft and Disney and developing country companies like Brazil’s Natura Cosmetics, which are more than willing to voluntarily buy REDD offsets that conform to standards that they know and trust.

But these voluntary buyers are the minority, and private-sector funding won’t begin to flow on the kind of scale needed to slow climate change until governments impose global caps on greenhouse gas emissions, enacting policies that reward conservation with an adequate price on carbon. Until that happens, governments that choose to support REDD need to make sure that they are not leaving the good projects already underway in the lurch. Otherwise, not only will we lose the progress made to date, but we will dampen the enthusiasm of green entrepreneurs to take on risk to do the right thing.

How Can You Keep the Info Flowing?
This post is built on research generated by Forest Trends, a nonprofit environmental organization founded by foresters and economists to explore the interplay between economy and ecology. It’s part of our participation in the Social Entrepreneurs Challenge, which was launched on September 30 by the Skoll Foundation and Huffington Post. It’s a CrowdRise campaign designed to raise awareness and funding for social entrepreneurs, and we can certainly use it.

If you like our posts, be sure to shout us out on Huffington Post or to share us with your friends. If you really like them, be sure to help us out with a small donation here.

Calling All Fans of Ecosystem Marketplace: Here is Your Chance To Help Us Help You!

Ecosystem Marketplace is participating in the Skoll Foundation’s fundraising challenge that runs through November 22. The effort is aimed at innovative enterprises like Forest Trends (Ecosystem Marketplace publisher) that seek to promote sustainable solutions to the world’s problems.