Makanda Khisa needed to recruit 60,000 farmers for the new Kenya Agricultural Carbon Project, and he knew that the early movers would set the tone for those to follow. Here’s how two of those early movers, Ignatius Sifuna Nabutola and Prisca Mayende, helped him get the project off the ground. 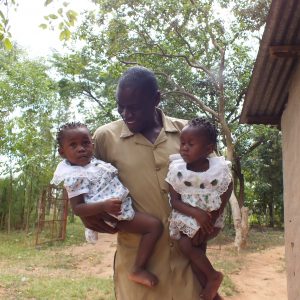 This is the third in a continuing series on Kenya’s agroforestry revolution, and has been edited since initially published to provide more continuity with later installments. You can read the first installment here.

“I’m not employed fully, and in time I’ll also grow old,” he says. “And if I don’t have trees, it will be hard to live when children are at school.”

A brick-layer by trade and farmer by calling, he says trees are like an education fund to be harvested for timber when his children go to college. He’s also a respected local leader, which is one reason Makanda Khisa recruited him early for the Kenya Agricultural Carbon Project (KACP), a ground-breaking effort to get 60,000 farmers planting trees on their land to improve soil and increase yields.

Launched in 2010, the project was part of a massive experiment to see if these practices also infused enough carbon into the soil to cover start-up costs by generating carbon offsets. When Khisa, who goes by the name “Johnny”, rode up to Nabutola’s farm on his motorbike at the start of the project, Nabutola was all ears.

The 2008 economic downturn had hit him hard: first, the price of sugar, his primary crop, plunged; and then his construction gigs dried up. So when Khisa pitched Nabutola on agroforestry, Nabutola jumped at the chance to diversify his product line and plant trees for the future.

He also agreed to bring Khisa to his local farmers’ cooperative, so they could pitch the idea together.

Prisca Mayende, who we met in the first installment of this series, joined the program shortly after Nabutola, and her yields have increased so much so that she built a small school at the edge of the farm, where her students are each told to plant a tree that they can harvest when they get old.

“I just love trees,” she says. “So, the day Johnny brought the seeds, we started doing farm plan layout, and I started mobilizing others.”

Like many farmers, she’d already had some exposure to agroforestry – first, as a child, before her parents cleared their diversified farm to make way for sugar cane, and then through a weekend workshop that the Ministry of Environment sponsored.

“I learned a bit, but there was no follow-up, and I wasn’t able to implement what I’d learned,” she says. “We all knew that life was better when there were trees.”

A bubbly, natural salesperson, Mayende began taking Khisa to her meetings as well. They made a natural team: she’d warm up the audience, and he’d explain the mechanics of agroforestry: how some trees infuse nitrogen into the soil, how others provide fruit or fodder for cows, and how they can all shelter delicate crops from the scorching sun and absorb floodwaters when the rains come.

“It’s not difficult,” says Khisa. “These are things they have been doing, but now we are explaining it in a more technical way.”

Within a few months, 30 groups had agreed to give it a shot. Only then did Khisa begin to deploy his new recruiting tool.

“After 2010 – after we had worked together – they introduced carbon,” says Mayende.

The deal was this: if farmers kept good records, VI Agroforestry would blend those records with periodic ground-truthing to calculate the amount of carbon that the farmers were locking in the soil. Then, some time after 2011, independent auditors from Det Norske Veritas (now DNV GL) would visit random sites and check the numbers. If it all added up, the World Bank would pay the carbon bonus.

From day one, Nabutola kept meticulous records in a black ledger filled with rows and rows of numbers and maps of his farm.

“Here’s where I started in 2010, when I just had maize and some fallow areas,” he says, pointing to a simple square.

“Farmers need these inventories to monitor their outputs,” says Caroline Musee, who oversees VI Agroforestry’s monitoring and evaluation in Kenya. “But we use them to estimate the amount of carbon sequestration.”

“Here is 2015,″ Nabutola continues, flipping to a page that looks more like a mosaic, reflecting the farm plan layout, which he says helped him tweak his activities in ways that have enabled him to increase his income roughly 30% per year the last two years.

“After you start planning, you know the inputs, outputs, risks, and challenges,” he says.

That’s just $20, and because of the arduous auditing process, the payments didn’t come until 2014. At the same time, VI Agroforestry found that it didn’t have the manpower to reach 60,000 farmers, and by the end of 2015 it had brought only half that many into the program.

The overall results, however, are stunning, as Mayende shows as she zips gleefully across her lush property – beginning with a small mango orchard she named after Kenyan Nobel laureate Wangari Maathai, whose Green Belt Movement planted more than 51 million trees.

“I planted these the day she was buried,” says Mayende. That’s just five years ago, but the trees are towering over us, bursting with fruit.

“Before VI came, there was nothing here like a tree,” she says. “When the rains came, we had floods. Now, the rains come, and everything is fine. Everything is green. I have fruits and vegetables, and fodder for my cow.”

Last year, another company, SCS Global Services, audited the figures for 2012-2014, and found the carbon sequestration per farm was almost double the expected amount, and VI Agroforestry had achieved its goal of pulling 150,000 metric tons from the atmosphere.

Money for the second verification should be flowing soon, and while it will dwarf the first payment, it pales in comparison to the increased income from higher, more consistent yields.

“The bonus is nice, but it’s not why I’m doing this,” says Nabutola.

In hindsight, VI Agroforestry could have doubled its impact by using all of the carbon money to hire staff instead of dividing it among farmers. Could it do so in the future?

Maybe, but that’s a risky proposition: this project worked because the World Bank guaranteed them it would buy the offsets at a set price, but Ecosystem Marketplace’s most recent State of Voluntary Carbon Markets report showed that prices slid in 2015, and many offsets went unsold. If VI Agroforestry scaled up but failed to cover its growth through carbon markets, then decades of meticulous progress could evaporate.

Private companies like Danone, however, are more accustomed to risk; and they depend on small farmers for their raw materials, which is why the yogurt giant and 11 other multinationals came up with a solution called the Livelihoods Funds, which are being used to help small farmers around the world.

“The solution of Livelihoods is simple,” says Bernard Giraud, who created the funds. “We need to invest up-front, because if we don’t take any risk, there is no way that small farmers can pre-invest by themselves.”

…in the next installment of this series: “How Impact Investing Links Big Business And Small Farming“.