The 15th United Nations Climate Change Conference has opened in Copenhagen, and few attendees expect it to yield a binding global agreement on how to reduce greenhouse gas emissions.  That doesn’t, however, mean “Hopenhagen” won’t prove to be a critical step in the development of a blueprint for reducing climate change by saving trees.  EM will be posting daily from the event. 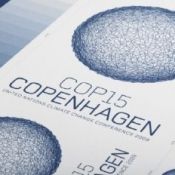 Because Reduced Emissions from Deforestation and forest Degradation (REDD) was not included in the Kyoto Protocol, its role in policy is discussed in the AWG-LCA, which formed a “subsidiary body”, the the Subsidiary Body for Scientific and Technological Advice (SBSTA), to discuss the technical aspects of REDD.

Under the Kyoto Protocol, industrial countries can write off emissions captured through Land Use, Land-Use Change, and Forestry (LULUCF) against their industrial emissions. For this reason, LULUCF talks take place in the AWG-KP tract.

The 15th United Nations Climate Change Conference has opened in Copenhagen, and few attendees expect it to yield a binding global agreement on how to reduce greenhouse gas emissions.   That doesn’t, however, mean “Hopenhagen” won’t prove to be a critical step in the development of a blueprint for reducing climate change by saving trees.   EM will be posting daily from the event.

7 December 2009 | Danish Prime Minister Lars Lokke Rasmussen would love to unveil a “Copenhagen Protocol” to succeed the Kyoto Protocol 11 days from now for the 15,000 negotiators from 192 nations assembled in his capital city for the 15th Conference of the Parties to the United Nations Framework Convention on Climate Change (COP 15).

He’s fairly certain that agreement won’t happen in the next two weeks, but that didn’t stop him from opening with a declaration of hope.

“Differences can be overcome if the political will is present,” he said.   “And I believe it is.”

That will, however, is not universally strong – and there’s widespread disagreement over how to bring it into reality.

Our job is to keep you abreast of how that will manifests itself in the debate over how to account for carbon offsets generated through reduced emissions from deforestation and forest degradation (REDD) and other changes in land use.

These issues are part of a critical but at times tedious debate that we’ve been on top of right from the start, and we’ll begin posting daily from Copenhagen on Thursday.

If you’re new to climate change negotiations, the International Institute for Environment and Development (IIED) has also posted an excellent backgrounder that will give you the overview you need to understand our coverage.

We know that plenty of our readers are here in Copenhagen with us, and welcome any feedback you care to share.   Feel free to contact us at [email protected].