Twenty US states have pledged to make sure the United States keeps its Paris Agreement pledge to reduce emissions 28 percent, as have more than 50 major cities and 60 major corporations, representing a $10 trillion economy. Today, California Governor Jerry Brown and former New York Mayor Mike Bloomberg unveiled the plan for getting there. 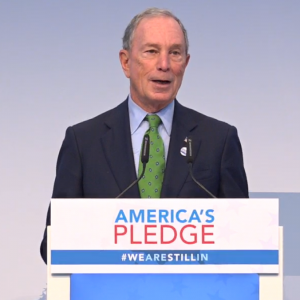 11 November 2017 | BONN | California Governor Jerry Brown offered a lesson in handling hecklers as he and former New York Mayor Mike Bloomberg unveiled “America’s Pledge” on climate: a detailed plan to not only meet but exceed the country’s commitments under the Paris Agreement, despite impotence and recalcitrance at the federal level.

“I’m re-framing my speech,” said Brown, as hecklers demanded an immediate end to the use of fossil fuels. “Beyond noise to real climate action!”

The two spoke at the US Climate Action Center, the unofficial US pavilion at year-end climate talks here in the former German capital of Bonn. They appeared alongside Fijian Prime Minister Frank Bainimarama, who is the President of the 23rd Conference of the Parties (COP23) to the United Nations Framework Convention on Climate Change (UNFCCC), as the talks are officially called, and they focused on the importance of “non-party stakeholders” – which are cities, states, companies, and anyone who doesn’t have a seat at the UNFCCC table.

They also announced the publication of the America’s Pledge Phase One Report, a 127-page analysis of existing and proposed climate efforts. We will be providing more details on that later in the day.

Twenty US states have endorsed the We Are Still In initiative, as have more than 50 major cities and 60 major corporations, representing a $10 trillion economy. If they were a separate country, they would be the third largest economy, behind the United States and China.

The report does address the need to improve forests and soils, which is the element we will be focusing on throughout these talks. Among other things, the report notes that 40 of the largest 51 cities have adopted an urban tree canopy cover goal or urban temperature-reduction target and that more than 3,400 communities are committed to implementing basic urban forestry standards through Tree City USA.

Check back later for details, or subscribe to the Bionic Planet podcast, which is co-produced by Ecosystem Marketplace publisher Forest Trends and will be providing coverage throughout the second week of the talks. You can access that on iTunes, TuneIn, Stitcher, or listen directly on this device here: