The Supreme Court recently listened to a case arguing the government is not allowed to require a landowner to use personal resources for public use in order to obtain a permit. Here, The Swamp School, an educational group for those interested in wetlands and green issues, has provided key elements of the case that all seem to center around the scope of government. 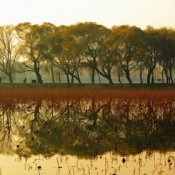 The Supreme Court recently listened to a case arguing the government is not allowed to require a landowner to use personal resources for public use in order to obtain a permit. Here, The Swamp School, an educational group for those interested in wetlands and green issues, has provided key elements of the case that all seem to center around the scope of government.

This article was originally published in The Swamp Stomp newsletter. Click here to read the original.

13 February 2013 | Now I know this may sound a bit extreme, but as I write this the US Supreme Court is considering this as a possible outcome of the most recent wetlands case they have heard. The case I am referring to is Koontz v. St. Johns River Water Management District. The oral arguments were presented to the Court on January 15, 2013.

For some reason this one did not make ABC, NBC, CBS, CNN, Fox or any other major news venue. Heck, I could not even find it on Drudge. Despite its lack of austerity, it is probably one of the biggest wetlands cases presented to the Court since Rapanos.

The question put before the Court is quite simple. “Is the government liable for a taking when it refuses to issue a permit until the landowner has agreed to dedicate personal resources to a public use?”

The quest for an answer has taken some very interesting turns. To start, let’s begin at the beginning. This is from the US Supreme Court Media OYEZ website.

In 1994, Coy A. Koontz requested a permit from St. John’s River Water Management to develop more of his land than the original permit allowed. St. John’s had jurisdiction over Koontz’s land. St. John’s agreed to issue the permit on the condition that Koontz deed the rest of his property into a conservation area and do some mitigation work on the surrounding areas. Koontz agreed to the deed but not to the mitigation work. St. John’s denied the permit application.

Koontz sued St. John’s River Water Management, and the trial court found in favor of Koontz. A Florida trial court held that St. John’s actions effected a taking of Koontz land and that imposing requirements for the issuance of a permit is only constitutional if the required action serves the same governmental purpose as the ban on development. Florida’s Fifth District Court of Appeal affirmed. The Supreme Court of Florida reversed.

In addition, a number court briefs were also submitted. Among them The American Civil Liberties Union (ACLU) submitted in support, oddly enough for the Mr. Koontz. There is also one from the Former Members of the National Research Council Committee on Mitigating Wetland Losses.   As former members they seemed a tad bitter. There are many more for both sides. Not surprisingly, the Federal Regulatory Agencies are in support of the respondent.

Now the merits of the case hinge on the concept of what constitutes a taking. During the oral arguments the Court challenged both sides on the issue of a taking. The traditional view is that when the government deprives the owner of his/her investment backed expectations, it is a taking (Penn Coal v. Mahon). However, the petitioner has taken a different route. He has put forward another case, namely whether a land-use agency can be held liable for a taking when it refused to issue a land-use permit on the sole basis that the permit applicant did not accede to a permit condition that, if applied, would violate the essential nexus and rough proportionality tests set out in Nollan v. California Coastal Commission (1987) and Dolan v. City of Tigard (1994). In addition he also advocates that the nexus and proportionality tests set out in Nollan and Dolan apply to a land-use exaction that takes the form of a government demand that a permit applicant dedicate money, services, labor, or any other type of personal property to a public use.

Now there is a lot of legalese to sort through on this case. Quite frankly, the Justices seemed a bit perplexed as to the merits of the case. However, they do that. I think it messes with the attorneys minds.

There is one major theme to this case that was not emphasized in the oral arguments that may be the heart of this case. Namely, can the fox watch the henhouse?

The situation is one of ethics and perhaps conflict of interest. Can a state or other government regulatory agency whose job it is to evaluate wetland impacts require that the permitee pay that same organization for mitigation? It is sort of like, create the need for mitigation and low and behold we just happen to have some mitigation available to you if you pay us for it.

Several of the Justices used the example of, “we will give you a permit if you pay for our new football stadium.” To add to this thought experiment, substitute football stadium for Shriners Hospital. In both cases, the permit applicant would be required to pay for something off site and for the public good. The question before the Court is, is this constitutional?

The ramifications of this case going either way are significant. On the one hand if it is deemed unconstitutional, what does this mean for government or private wetland banks? George Howard of Restoration Systems is deeply concerned as his business is the development of private mitigation banks. He had stated that, “I wish that the National Mitigation Banking Association would have submitted a brief to the Court expressing their position on this matter. Without this an entire industry is unrepresented and how do the wetlands lost get mitigated?”

Should it be decided constitutional, is there a limit on what a government agency can require as a permit condition?

The financial dimension to the taking is also another matter. If the government can ask for the moon and stars and it is deemed a taking, how are they going to pay for it? What happens if the government simply cannot afford to issue the permit even if the applicant is willing to concede to the conditions? Perhaps if they only ask for the moon, but not the stars they would not be taking the land. But add one star and then they (the government) need to get the check book out. The Justices seemed to prefer football stadiums anyway.

This is a very complicated case and I am not a lawyer. So I am sure I have misunderstood much of this case. However, there oral arguments are a hoot and worth the hour to listen. The Court has an MP3 download and an HTML5 player with the transcript that I highly encourage you to listen to. Please let me know you thoughts on this case and please feel free to distribute this email around. This case did not make the major news, but its impact to people in the land development business could be career changing.

Marc Seelinger is a Professional Wetland Scientist and Director of the Swamp School.