It’s not all doom and gloom as year-end climate talks enter their final days in Katowice, Poland, with many observers seeing increased support for natural climate solutions such as better management of forests, farms, and fields. Such solutions can provide one-third of the action needed to meet the Paris Agreement targets, but historically draw just 3 percent of dedicated climate finance. 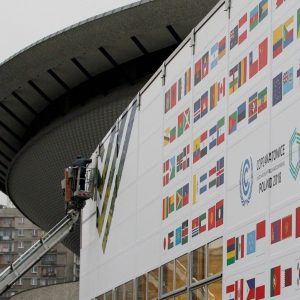 10 December 2018 | KATOWICE | Poland | Global climate talks bogged down here over the weekend as negotiators from developed countries pushed back against language overtly “welcoming” (as opposed to “noting”) the Intergovernmental Panel on Climate Change’s (IPCC’s) October analysis of the changes needed to prevent global temperatures from rising more than 1.5ºC (2.7ºF) above pre-industrial levels.

Don’t, however, let that fool you. The IPCC analysis and its findings are having a profound effect on this year’s proceedings.

“One of the key things that comes out of that report is the fact that the forest and land sector is underrepresented in action and support,” said Peter Graham, Managing Director of Policy and Research at Climate Advisers. “There are many reasons for that, and therefore there are many solutions.”

This story is adapted from Episode 38 of the Bionic Planet podcast, which features our fourth annual mid-session stock-taking with key representatives from leading environmental NGOs. The wide-ranging discussion includes Chris Meyer of the Environmental Defense Fund (EDF), Josefina Braña Varela of the World Wildlife fund (WWF), Jason Funk of Carbon 180, Peter Graham of Climate Advisors, and David Burns of the National Wildlife Federation. You can hear the entire discussion on RadioPublic, iTunes, Stitcher, or wherever you access podcasts – as well as on this device here:

The Goal and the Gap

The Paris Agreement replaces the Kyoto Protocol, which was a top-down, one-size-fits-all agreement requiring developed countries to reduce emissions from a 1992 baseline while encouraging, but not requiring, action on the part of developed countries. It failed in part because it didn’t recognize key differences between countries within the three broad categories of developed, developing, and transitioning countries.

The Paris Agreement, on the other hand, lets each country create its own “Nationally Determined Contribution“, or NDC, and it also creates mechanisms for helping countries increase their ambition, in part by helping each other through mechanisms enshrined in Article 6 of the Agreement.

Article 6.2 creates guidelines for buying and selling emission-reduction units between countries in the form of so-called “internationally transferred mitigation outcomes”, or “ITMOs”, which countries can only use to help each other reduce emissions below their NDC – not just to meet them. The biggest challenge to creating ITMOs, beyond determining what is and is not a recognized emission-reduction, is agreeing on how to track them, and that’s one of the issues that negotiators are supposed to be fine tuning at this year’s talks.

The ultimate aim is to create a “Paris Rule Book” for implementing the Paris Agreement from 2020 onward – a critical task, because even if every country completely implemented its current NDC, global temperatures would still rise more than 3.7 degrees Celsius, which is deep into the danger zone, according to global scientific consensus as articulated through the IPCC.

“That requires transformational change in all sectors of the economy worldwide, including the land sector,” said Jason Funk, who oversees international policy for environmental NGO Climate 180. “There’s this additional thing that needs to happen, which is we need to pull carbon out of the atmosphere that’s already been emitted, and we have some options for doing that as well.”

Removals in the IPCC Report

The IPCC report divides removal options into two categories – technological solutions like industrial carbon capture and storage (CCS), which are exciting but expensive and untested; and natural climate solutions like reforestation and soil management, which are cost-effective and time-tested; although many scientists delineate a hybrid category for practices that couple bioenergy with carbon capture and storage.

A 2016 survey of available research showed that natural climate solutions can deliver 37 percent of the mitigation needed to meet the Paris Agreement’s 2-degree Celsius target, while the October IPCC report focused on practices needed to meet the more ambitious 1.5-degree target.

“A lot more near-term activity in the land sector could mean we don’t have to rely on those industrial technologies later in the century,” says Funk. “This is stuff we know how to do, and we just need to wrap it up in a big way.”

While in years past, the sense was that nature-based solutions were being ignored, this year they seemed to emerge as a connecting thread, says Josefina Braña Varela, Senior Director of WWF’s Forest and Climate Program.

“More and more, we are hearing country delegates and other organizations discussing the importance of nature and the need for countries to collaborate and align efforts here in the UNFCCC, as well as in the CBD (Convention on Biological Diversity) and the UNCCD (United Nations Convention to Combat Desertification),” she says.

Her organization is spearheading an initiative called “New Deal for Nature and People“, which aims to promote coordination among the three UN Conventions around the Sustainable Development Goals (SDGs), which are a collection of 17 global goals set by all 193 countries of the United Nations General Assembly in 2015, on the eve of the Paris Climate Agreement.

“This is something that is permeating the narrative of the negotiations, and hopefully it will have a good impact in whatever is negotiated for the Paris Rule Book,” she says.

Developed vs Developing: The Rift Remains

Everyone seems to agree that finance will remain contentious, as low-emission developing countries bear the brunt of a catastrophe they contributed little to and high-emission developed countries balk at funding the activities needed to help them adapt. The UNFCCC’s Standing Committee on Finance says that climate-specific finance flows from developed to developing countries remain far below pledged amounts, and that much of what is flowing is just re-allocated development funding.

The emergence of financing programs designed to Reduce Emissions from Deforestation and Degradation of forests, plus other land uses (REDD+) is often seen as a template for accelerating finance into agriculture in developing countries.

“That’s going to be important in terms of how agriculture, REDD+, and the land sector in general are going to be taken on board in this Rule Book – not now, but probably before 2020,” says Braña-Varela.

Another issue is how emissions from international flights are handled. Because such emissions are generated between countries, they were not included in the Paris Agreement, but instead come under the prevue of the International Civil Aviation Organization (ICAO), which is the UN body charged with overseeing international air travel.

In 2016, ICAO members agreed to cap greenhouse-gas emissions from international flights at 2020 levels from the year 2021 onward, and airlines can’t reduce their emissions internally can offset them through a program called the Carbon Offsetting and Reduction Scheme for International Aviation (CORSIA).

Still to be resolved: what types of offsets will be recognized under CORSIA?

If credits generated by promoting sustainable forestry and agriculture are recognized, this could be a boon to the land-use sector, but one that comes with an accounting quagmire as negotiators from CORSIA and the UNFCCC work to track emission reductions generated in one country but used to offset international emissions.

Finally, perhaps the most obvious sign of the growing emphasis on natural climate solutions is the high profile of indigenous people at this year’s summit, as well as growing presence farmers’ cooperatives – as opposed to ministries of agriculture.

Over the course of this week, we will be rolling out stories focused on the growing influence of both farmers and indigenous people in the climate talks.

“Last year, the parties agreed not just to have workshops and discussions and technical conversations about these issues, but to bring them in a formal way into the negotiations,” says Funk, adding that agriculture has now been fast-tracked in both the Subsidiary Body for Scientific and Technological Advice (SBSTA) and the Subsidiary Body for Implementation (SBI), which are negotiating tracks focused on specific issues.

“They also wanted to bring in other organizations that are linked to the UNFCCC process,  who are also doing work that relates to agriculture, to understand what they’re doing so we could put together the pieces of the jigsaw puzzle and understand what the overall picture is,” he says. “The idea is to see who could do what, where there are still gaps, and what capacities already exists that we don’t want to recreate.”

“Agriculture is where REDD was at back in 2007, and now we kind of have Bali in the comparison,” says Meyer, referencing the 2007 climate talks in Bali where REDD began to gain steam. “We’re trying to accelerate this, because we do we need action in this space…by the end of 2020.”