When modular carpet maker Interface decided to make a carpet that was carbon-neutral, they wanted to cover the whole lifecycle of the product – including the years people spent vacuuming it. To do that, they became an early user of carbon offsets, and today they’re one of the biggest. Here’s their story. 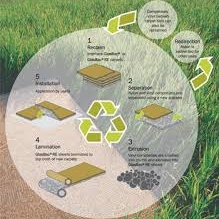 9 December 2013 | Interface, one of the largest carpet manufacturers in the world, has long found inspiration in forests. Its designers literally took to the woods in search of ways of doing carpet more sustainably, but instead of looking up to the canopy or into the leafy understory, they kept their eyes cast towards their feet.

That’s when they realized that nature’s carpet is infinitely unique, with no two sticks or stones alike. Therein lies its beauty, and there they found the inspiration for their “5th wall”: a carpeted floor made up of unique patches that can be laid down in any order and easily replaced, just like nature’s carpet.

That led to Interface’s ‘Mission Zero’ campaign, which aims for zero emissions, zero waste, and zero oil by 2020. The company set up an infrastructure for recycling carpet, including that from other companies, and put itself on the path to a “closed loop” manufacturing process that uses no virgin material.

But when it came to reducing greenhouse gas emissions, they had a serious problem.

Emissions Don’t End with the Sale

If you really want to make a carbon-neutral carpet, Interface reasoned, you should be able to vacuum it without generating emissions. That, the company concluded, was impossible as long as vacuum cleaners are run on fossil fuels. A carpet typically lasts seven years, and that much vacuuming and cleaning leads to about three times the carbon emissions that were generated during its manufacture. What’s more, even if Interface limited its carbon-neutral ambitions to the manufacturing process, the cost of squeezing the last bits of greenhouse gas out of the process would drive the cost of their carpets through the roof.

In the end, Interface decided to use carbon offsets to reduce its carbon footprint. Through the “Cool Carpets” program, the company calculates the emissions of its carpets from ‘cradle to grave’ -from source material to customer use to recycling-and then purchases offsets to cancel those emissions out.

It’s a decision they made more than a decade ago, and now they are one of the largest purchasers of voluntary carbon offsets in the United States.

Buddy Hay has been in charge of voluntary carbon purchases since 2002, and he has seen the voluntary market transform from a do-it-yourself experiment a decade ago to an established marketplace with differentiated products, third-party certifiers, and plenty of broker ‘storefronts’ that facilitate transactions.

Growing with the Market

When the company began offsetting, there was no established carbon market. Interface convened its own panel of advisors to help navigate what was then a “Wild West” of offsets. The company purchased its first tons from a Blue Source carbon capture and storage project and went from there. Today, Interface invests in projects from the US to Guatemala to Kenya to Brazil to India to Thailand. Hay more or less manages the offset-buying single-handedly, a task that he calls “the third half of my job.” He estimates that the company now spends about $2 million on offsets a year.

Interface works with several different companies, including First Climate, the Carbon Neutral Company, Native Energy, South Pole Carbon, and Social Carbon, to negotiate two- to four-year contracts with project developers all over the world. Interface’s good reputation in the marketplace and the fact that it often purchases all the offsets generated by a particular project over the contract period often gets the company a good price, Hay said. Interface’s contracts are structured to mitigate against risk by specifying the number of offsets that must be delivered by a certain date – whether from the originally contracted project, or another one.

The company essentially buys two categories of offsets: the less expensive, higher volume ‘commodity’ offsets and the pricier ‘boutique’ offsets for projects with benefits beyond carbon. Hay’s strategy is necessarily a hybrid one: given the volume of offsets the company buys, Interface cannot afford to spend $10 per ton across the board, and yet Hay likes to support ‘boutique’ projects such as forestry. Interface has invested in offsets from a REDD project in Kenya and from reforestation projects in Guatemala and Tanzania. Most recently, they’re supporting carbon management of 12,000 acres of Forest Stewardship Council certified land in North Carolina and Virginia.

Though Interface’s sustainability goals are guided by an internal compass rather than consumer pressure, the company makes a point of letting its customers know that they are purchasing not just carpet, but carbon. Though the company absorbs the cost of the offsets without ‘re-billing’ customers, Interface’s salespeople present all carpet-buyers with a certificate specifying the number of offsets that were retired on their behalf. Hay admits that only a subset of customers initially care about carbon neutrality, but he also believes that doing right by the climate gives Interface a marketing advantage. Even if buyers remain unmoved by the idea, the offset certificates “give our salespeople a new reason to get in front of their customers.”

Part Three: Deutsche Post DHL: Neutral If You Choose shows how an international logistics company engages customers around valuing emissions-free shipping – and why they’ve come around to forestry