Indonesia has banned logging in primary forests and dredging in peatlands to unlock up to $1 billion in seed funding from the government of Norway that could help the country earn billions more by saving tropical rainforests and capturing carbon in trees.  To earn a shot at that less-than-certain income, however, it will have to forego guaranteed billions from logging, pulp, and palm oil. 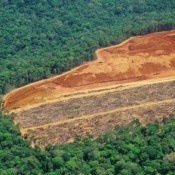 19 May 2011 | Indonesian President Susilo Bambang Yudhoyono on Thursday signed a two-year moratorium on logging in primary forests and dredging in peatlands to unlock up to $1 billion in seed funding from the government of Norway that could help the country earn billions more by saving tropical rainforests and capturing carbon in trees.

To earn a shot at that less-than-certain income, however, it will have to forego guaranteed billions in concessions from logging, pulp, and palm oil industries – an equation that prompted internal government debate over the definition of “primary forest”, and delayed the signing of the moratorium by five months.   The official text is expected to be released on Friday, and those definition are sure to be scrutinized by industry groups and environmentalists alike.

The Norwegian government made the billion-dollar pledge one year ago, following Yudhoyono’s commitment to battle deforestation and reel in the country’s rapidly-rising CO2 emissions.   It is earmarked for building up the country’s capacity to measure and monitor its forests – a key step if the country is to earn carbon credits for reducing greenhouse gas emissions from deforestation and forest degradation (REDD).

That funding is to be paid out slowly over the 7-8 years, and is contingent on certain benchmarks – the implementation of this moratorium being one of the first. Indonesian and international observers are looking to the moratorium as an indication of the seriousness of the country’s commitment to the principles and objectives of REDD.

Yudhoyono had pledged to sign the moratorium on January 1, but faced stiff opposition from other officials and industry lobbyists who argued that REDD was less lucrative than palm oil, pulp, and timber.

Indonesia’s history of unchecked deforestation earned the nation an unenviable place among the top greenhouse gas (GHG) emitters in the world, ranking third globally.   Even before securing this ignominious ranking, however, Indonesia had long been targeted with sustained criticism from environmental non-governmental organizations (NGOs) and foreign governments for its troubling environmental record.   It came as a major surprise for many in the international community as Indonesia began taking several serious steps toward initiating a nation-wide REDD program over the past year.

The singularity of Indonesia’s emissions profile (80% from forest and peatland degradation), has made the island nation a prime location for testing and demonstrating the potential for REDD on a globally-meaningful scale.   And yet, while many observers in the media are attuned to the major events occurring in Indonesian forest and climate change policy, few independent voices have provided a view of these events that goes beyond the national significance of the Indonesian REDD experiment.   Indonesia is an international focal point and laboratory for dealing with numerous critical dialogues including land tenure and indigenous rights reform, biodiversity conservation strategy, let alone the pivotal gateway it may hold for global carbon markets.

An Overview of REDD-Related news in Indonesia

On May 1, 2009, the Indonesian Minister of Forestry signed the Ministry of Forestry Regulation P.30/2009 on Procedures for Reducing Emissions from Deforestation and Forest Degradation, putting into motion the ongoing REDD saga.

REDD featured prominently throughout the climate talks of 2009, achieving its most prominent recognition in December 2009 with an explicit place in the Copenhagen Accord as well as insertion of language supporting a REDD mechanism in the formal negotiating tracks within the UNFCCC.

In January 2010, Indonesia announced an audacious plan to reduce emissions by 26 percent from business as usual levels by 2020, with REDD being a major component of the plan. By mid-year Indonesia had reviewed its forestry laws to make them more compatible with REDD and was, with international support, building capacity on the ground to deal with issues of governance and monitoring.

In June 2010, Norway and Indonesia signed a letter of intent pledging US$1 billion from Norway to initiate a REDD program in Indonesia. The deal intended to aid Indonesia in achieving its emission reduction goals, realized primarily through the establishment of   2-year moratorium on concessions for forest-clearing activities slated to begin in 2011. Indonesia then went one step further, announcing a voluntary decision to halt concessions on peatlands immediately. However, disagreements on Indonesia’s part about what constituted “peatlands” made some question how committed the country is to enacting a credible moratorium.   As with forest conservation more generally, the “name game,” that is, the choice of definitions of “forest” and “peatland” used for these types of programs are politically, economically, and environmentally contentious and subject to heavy lobbying and pressure from various interest groups.

Following the announcement of the moratoria and progress toward a wide-scale implantation of the REDD plan, detractors—mostly environmental groups and scientists — began faulting Indonesia’s hesitation in reducing existing forestry concessions, citing concerns over the influence of the large palm oil and paper industry.

The eruption of a number of environmental scandals this summer involving Indonesian palm oil giant Sinar Mas added to fears that powerful industry interests could undermine forest conservation efforts. In one of the most-covered events of the summer, Greenpeace launched a campaign against Sinar Mas that convinced several large companies (including Burger King and Unilever) to cut Sinar Mas products from their supply chains. A moment of heightened tension came when Greenpeace published photos allegedly showing Sinar Mas clearing protected primary forests.

Indonesia’s REDD program appears to be moving forward, but is still characterized by confusion and uncertainty.   Several conflicting statements as to the status of disbursements of funds from the Norwegian pledge, as well as jurisdictional power-plays have been common.   Plans to form a ‘REDD council’, shifting power from the Forest Ministry to the new agency that would report directly to President Susilo Bambang Yudhoyono, were criticized by a third agency, the National Forest Commission, who claimed it would make forest management more complicated. In a gaff that received minimal press, the delayed distribution of the first $30 million from the $1 billion REDD fund in early October was announced by Environment Minister Gusti Muhammad Hatta, who said that Indonesia had not yet not completed necessary preparatory steps stipulated in the deal. The President’s special assistant on climate change, Agus Purnomo, quickly refuted the claim, saying a decision to postpone distribution of the funds had not been delayed, but that the REDD taskforce would be choosing which financial institutions would handle the funds that coming Monday.

Daniel Kandy is a research fellow at Ecosystem Marketplace, focusing on Forest Carbon and Biodiversity markets. He recently graduated from Washington University in St. Louis with a degree in anthropology, focusing on land use and agriculture. He can be reached at [email protected]