The indigenous people of Peru’s Amarakaeri Communal Reserve are conserving 400,000 hectares of forest while also feeding their families – in part by sustainably harvesting Brazil nuts. To do so, however, they’ll have to forge relationships with trusted suppliers outside the territory and also find the sweet spot where they harvest enough to make a living but not so much that they deplete the ecosystem. 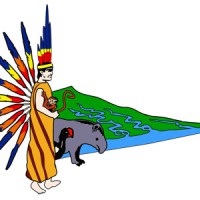 14 November 2016| As the president of Peru’s Amarakaeri Communal Reserve (ACR), Fermin Chimatani has represented his forest people in talks and meetings from Lima to Paris, and one perception has dogged him from the start.

“People think we’re unstructured territory – no communities, no towns; just plants and animals, which they can take as resources,” he says of the reserve, which is home to three distinct peoples – the Harakbut, the Yime and the Machiguenga  – spread over ten communities and governed by a legal entity, the ECA Amarakaeri (ECA-RCA), which represents their collective interests outside the reserve.

“The fact is, we are viable communities, and we’ve entered the cash economy,” he says. “Our primary challenge is to identify activities that benefit the community in a harmonious way, without compromising the forest.”

Before the cash economy enveloped them, the people of this land, which the Peruvians now call Madre de Dios, or “Mother of God”, received a consistent bounty of nuts, berries, indigenous fruits, grains, and meat from the forest. But for decades – and especially since 2002, when the government officially demarcated the 400,000-hectare ACR – they’ve been struggling to maintain the reserve’s economic viability without depleting the land.

They started growing cassava, banana, and corn in lowland areas that had already been cleared, but all three crops proved especially susceptible to climate change, with its unpredictable rains and periodic flooding. In desperation, some residents started colluding with loggers and miners who entered the territory illegally.

For their own consumption, many continued to harvest traditional, wild-growing fruits; and in 2015, with help from SERNANP, the agency that oversees all of Peru’s protected areas, the people of ACR, searching for that sweet spot between nature and economics, begin commercializing one of those fruits: namely, Castaña, or “Brazil nuts”, which can be harvested without chopping trees.

Nut harvesting is a legal profitable activity for these indigenous communities, and while it isn’t as lucrative as mining or logging, it also isn’t illegal and doesn’t destroy ancestral forestlands.

But there’s still a catch – several, in fact.

To begin with, the nuts grow in forested parts of the ACR that are designated protected areas, and many of the indigenous people believed – wrongly – that it was illegal to harvest them. They did, however, need permission to commercialize the product, and they also needed to inventory the trees across the territory to determine the amount of nuts they can remove without disrupting the ecosystem.

SERNANP tapped funding from a United Nations Development Program (UNDP) designed to help communities adapt to climate change to finance the sustainable nut enterprise called the EbA Amarakeri Program. Ernesto Escalante overseas SERNANP’s activities in the ACR, and he remembers being surprised that the communities were so interested.

“We thought a lot of people were going to pull back, but to our surprise, a great percentage of the communities’ members are involved in the activity,” says Escalante. “Not only men, but women and children, committed to the community work.”

If the plan works, he says, it will do more than deliver a vital cash crop; it will forge tighter cooperation among the communities within the reserve, as well as with stakeholders outside of it – both of which could help the people develop a stronger and more sustainable economy.

The ACR communities formed Nut Harvest Committees and then invited specialists from two regional indigenous organizations, FENAMAD and COHARYIMA , to help them craft a Forest Management Declaration (DEMA), which is necessary to commercialize non-timber forest products inside a reserve.

“There was a lot of confusion about what can and cannot be done in Natural Protected Areas (NPA),” says Escalante. “They’d been told that the state prohibits all activities inside the reserves, and this caused confusion inside the community for many years.”

To de-muddle the facts, SERNANP set up training sessions to explain the different levels of regulation that apply to protected areas, where limited harvesting is allowed, and entities like the neighboring Manu National Park, where harvesting is not permitted.

The Nut Harvest Committees were able to obtain a permit for non-timber harvests within an indigenous reserve from SERNANP, which allowed the communities to get started.

Nuts begin falling in January, and they continue to drop into early April, so the indigenous communities conducted hands-on workshops to give people an idea of the labor involved in harvesting them on a commercial scale, which is unlike any harvesting the groups have done in the past. Some of the work – like marking trees and gathering fallen nuts – is fairly light, but cracking them open can be difficult, as is hauling them to a central location. Stronger men were tasked with harvesting and hauling, while women tended to stay in the village and sort the good from the bad.

As the workshop progressed, many of the older community members started recounting stories of specific sites that were especially bountiful, and the old stories often proved prescient.

“This exercise helps us to file all those traditional anecdotes and to integrate them with our current knowledge,” says Chinatani.

The Nut Harvest Committees sort the labor and divide the income, and with SERNANP’s help, they arranged meetings with potential buyers outside the territory. After speaking with several potential buyers, they settled on a company called Candor LATAM largely because it was willing to share in the risk and also had access to international markets, offering the greatest growth potential.

As the harvest progressed, the ECA-RCA entered their Brazil nut harvesting initiative and won the Innovative Experiences in Latin America Contest sponsored by Canopy Bridge, a company connecting buyers and sellers of sustainably-produced forest products, and Ecosystem Marketplace publisher Forest Trends, with funding from USAID.

ECA-RCA chose to put the $5,000 proceeds towards forest inventories, which will help determine the feasibility of expanding operations beyond the three communities where they are currently working and have developed management plans. The ECA-RCA is looking into expanding its harvest into the Communal Reserve itself, which is part of Peru´s system of protected areas. If sustainable management is feasible in this area, it will allow them to expand their production and the conservation benefits of Brazil nuts – ideally attracting more clients or better prices.

The ACR communities and their partners are interested in the nut product having its own brand. They’ve given it a name, Moritk´e Amarakaeri, and SERNANP is in the process of obtaining a certificate of origin for it, though it’s in early stages.

The big push for now for ECA-RCA is engaging with the seven other communities that reside in ACR but are not engaged in the nut harvesting initiative. Currently, 120 families out of 1,500 are participating with 1,700 acres ready for harvest, but by the time the EbA Amarakeri Program wraps up in 2017, ECA-RCA aims to have them all involved.

Even without engagement from all ACR communities, Chinatani says the Brazil nut harvesting initiative has had a significant impact on other indigenous and local communities.

“Little by little groups are coming and asking, ‘how did you achieve that?’ And that’s great! It’s having a big impact on the region,” he says.

Ultimately, Chinatani believes the success of the ECA-RCA’s sustainable initiative has lent credence to the concept that indigenous groups are heavily involved in land management and climate change planning.

“Through these sustainable activities, we spread the news that indigenous peoples are contributing with ideas of their own to mitigate and adapt to climate change,” he says.