The REDD Offset Working Group or ROW is the group tasked with finding best practices to incorporating REDD+ into California’s emerging carbon market. This week, the group held its second of three workshops. The event heard from Indigenous leaders and policy experts on safeguards and the importance of stakeholder engagement. 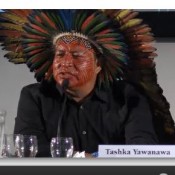 The REDD Offset Working Group or ROW is the group tasked with finding best practices to incorporating REDD+ into California’s emerging carbon market. This week, the group held its second of three workshops. The event heard from Indigenous leaders and policy experts on safeguards and the importance of stakeholder engagement.

28 March 2013 | Using the REDD+ mechanism to fight deforestation and climate change involves a complicated and lengthy process that crosses over several sectors. Because of its complex nature, Valentino Shal of the Mopan Maya Indigenous people says multi-stakeholder engagement is key to REDD’s success.

Shal is an Indigenous Social Development Consultant for the Mopan Maya community in southern Belize-a region offering pristine rainforest, mountains and rivers. It’s an area that could easily work for a REDD (reducing emissions from deforestation and degradation) project and many of the locals want it to. But before they can move forward, Shal says, certain safeguards must be in place to ensure that the rights of the Indigenous tribe regarding their land and culture won’t be violated and their way of life remains intact.

Shal’s concerns are commonplace among Indigenous groups worldwide contemplating participating in REDD projects. To address these concerns, the ROW-REDD Offset Working Group initiated an in-depth panel event made up of environment and social policy experts as well as Indigenous leaders to discuss how to build a sufficient safeguard system in the context of linking these jurisdictional-national or subnational- REDD+ programs to California’s carbon market.

The ROW was established to examine and offer recommendations on how states and countries can develop REDD+ programs and generate credits through California’s cap-and-trade system. Their event, “Benefits Sharing and Safeguards” also looked at how California should recognize existing safeguard policies as well as how the monitoring and reporting of these safeguards should take place.

“Indigenous people need to have access to information,” says Tashka Yawanawa, Chief of the Yawanawa People in Acre, Brazil. “We need information to make decisions that will reflect on our future and the planet.”

The Indigenous leaders agreed that without transparent information regarding REDD, they would be unable to make decisions. Access to information was one of several reasons policy leaders recognized the need to involve every area of stakeholders in the REDD process.

Jill Blockhus, a Senior Policy Advisor at The Nature Conservancy discussed the REDD+ SES (Social and Environmental Standards) initiative which aims to secure the necessary safeguards in place when building a government-led national, state or local level REDD program. REDD+ SES generates social benefits by protecting the rights of the local and Indigenous populations. All stakeholders-NGOs, financing agencies, governments and others-can use the standards.

“Following the standards is a multi-stakeholder process and very interactive,” says Blockhus. “It goes above and beyond the do no harm idea of safeguards.”

Complying with these standards is purely on a voluntary basis. State or country governments agree and sign up to participate.

“Governments agree because they see that there is value in planning a REDD process which engages a lot of stakeholders, gets their input and help in the design phase so the program ends up with good environmental and social performance,” says Blockhus.

Acre, Brazil is one state applying the standards to their REDD program, which is being developed under the System of Incentives for Environmental Services (SISA). REDD+SES will be used to assess the social and environmental quality of the program in its early days.

“REDD+ SES is an instrument that can report and communicate the impacts and results of the SISA and also to monitor the Brazilian safeguards,” says Monica Julissa of the Acre government’s Institute of Climate Change and Environmental Services.

SES can help engage stakeholders that are often hard to reach. Despite the many attempts at outreach, reaching key actors is a challenge, says Felicia Line, the Director of Climate Change in the Chiapas Ministry of Environment. Chiapas, Mexico is a region heavily inhabited by Indigenous groups. Line says engaging with people from crucial sectors like agriculture, livestock and forestry is necessary and so Line is looking at further capacity building and other ways to engage.

Reaching out to different sectors inside communities, like the young and elderly, and also to women is a challenge as well. In many societies, women aren’t involved in these issues.

In Belize, Shal says they intend to create special measures to ensure women are engaging.

“We don’t see our communities as static,” Shal says. “If we feel women need to be involved, then we will find those measures needed for their participation.”

Chief Almir Narayamoga Suruí­, the head of the Amazonian Surui people, has developed a 50 year sustainable management plan that includes a forest carbon project that protects 240,000 hectares of rainforest and ensures a greater livelihood for his people through the generation of carbon credits the project offers.

REDD can be done in a transparent manner and can help provide a great future, he says.

But other indigenous leaders are still unsure about REDD and say they need more information.

Indigenous people fear relocation and losing or being tricked out of their land rights by project developers and others. But Steve Schwartzman of the EDF (Environmental Defense Fund) says a primary difference of a jurisdictional REDD+ program-which is the program type that would be accepted in California’s carbon market-is that the government has more authority in the form of enforcing contracts or implementing policies that protect Indigenous peoples’ rights.

“Jurisdictions can do things that project developers and NGOs can’t,” says Schwartzman. For example, in Brazil, each state is constitutionally responsible for protecting the environment and the rights of Indigenous people. And Brazil’s Federal Public Ministry enforces these public interest laws, he says.

“It’s a forum that deals with these issues directly,” says Schwartzman.

Also at the jurisdictional level, relocating indigenous people to earn carbon credits won’t work, according to Schwartzman. In order to earn credits, there has to be a statewide or nationwide reduction of emissions which won’t be achieved by relocating an Indigenous community off of one piece of land.

Julissa of Acre and Line of Mexico both said relocation isn’t part of their government’s strategies.

In order to maintain low deforestation rates, Julissa says, we have to use the forests’ services sustainably. Relocating people out of a single area isn’t a sustainable method, she says.

“I don’t ever see relocation happening in Belize. I don’t think it’s something that is being considered by Indigenous communities, governments or NGOs. ” says Shal.

Nations agree that Indigenous communities are often good stewards of the land. And as a valuable part of REDD programs, the question of what benefits sharing will look like for these communities has been raised.

Because Indigenous communities are collective, Reategui of COICA believes the benefits should be collective as well. Improvements to a community’s education and health are possibilities. Reategui did point out also that the benefits should maintain the traditional culture and way of life. A benefit, for instance, could be an education program in their native language.

Elsa Esquivel , Director of Cooperativa AMBIO, a NGO located in Chiapas that works with Indigenous people in developing REDD projects, says there are many unknowns about benefits sharing.

“Where should the benefits be applied,” says Esquivel. “Is it going to be direct resources or compensatory programs for improving health or productivity? These are the things that are still unclear.”

Overall the opportunity for California to accept REDD credits from jurisdictions like Acre and Chiapas at some point in the future sends a message to business leaders that a market value has been put on stopping deforestation, Schwartzman says.

The panelists agreed that REDD+ programs created to participate in California’s market must be at the jurisdictional level and designed with the local and Indigenous populations in mind. So although California can’t force any jurisdiction to implement safeguards, it can require that certain protection measures are taken in order to participate.

Schwartzman also notes the importance of protected areas recognized for the ecosystem services they provide and to become part of a developmental policy that is sustainable. Otherwise the area will be difficult to maintain. He mentions that 20% of Amazon rainforest is recognized as a protected area for Indigenous populations and another 20% is under strict sustainable usage.

“If these lands could gain revenue for their ecosystem services, then that is a huge gain for the Amazon,” says Schwartzman. “And an enormous gain for the atmosphere and for the world.”