Hundreds of millions of dollars in climate finance have been pledged to helping indigenous people manage their territories, but all of that money is currently trapped in intermediaries. Here’s how the Amazon’s largest federation of indigenous organizations aims to change that. 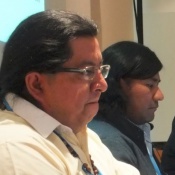 24 June 2015 | BONN/BARCELONA | Indigenous leader Juan Carlos Jintiach says he was ecstatic when governments around the world pledged $1 billion to end deforestation at last year’s climate summit in New York. He especially liked Norway’s pledge of $20 million per year to help indigenous people secure their rights. But he also knew what would happen next, as NGOs around the world quickly submitted proposals, and Norway issued a short-list of 53 finalists.

“In the end, only five indigenous organizations were invited to present final proposals,” says Jintiach, who at the time had just stepped down as Director for Economic Development of pan-Amazonian indigenous federation COICA.

“That’s how it always is,” he says. “We’ll be talking to governments directly, and asking them why they always have these bilateral government-to-government discussions, and then we’ll see $100 million change hands, and we’ll say, ‘What’s that for?’, and they’ll say, ‘That’s for indigenous people.'”

Chris Meyer of the Environmental Defense Fund (EDF) says that at least $50 million in funding linked to reduced deforestation or “REDD+ finance” has already been allocated for indigenous people, but it’s in limbo, scattered among the Forest Carbon Partnership Facility, the UN-REDD Program, and the Forest Investment Program – and that’s after he deducts 20% for administration and overhead.

“It’s not that the programs are doing anything nefarious,” he says. “It’s just that they’re bureaucratic and need to see a lot of things happen before they can release money.”

The Birth of the Indigenous Amazon Fund

In the last few years of his tenure, Jintiach had a front-row seat at the “grant games”, as COICA teamed up with NGOs like EDF, Woods Hole Research Center, and even Ecosystem Marketplace publisher Forest Trends to secure direct funding from large donors like the United States Agency for International Development (USAID), which is supporting COICA and a consortium of NGOs (including Forest Trends) under a program called AIME, which among other things helps indigenous people position themselves for REDD+ finance.

Current COICA director Edwin Ví¡squez Campos has been working to ready the organization and its members for REDD+ finance, and at mid-year climate talks in Bonn, COICA’s head of Environment, Climate Change and Biodiversity, Jorge Furagaro Kuetgaje, announced the creation of an Indigenous Amazon Fund, which is the brainchild of COICA consultant Roberto Espinoza and is designed to act as a kind of central bank for indigenous people across the Amazon.

Two weeks later, Campos announced that COICA would also seek to establish a more forceful presence in multilateral organizations like the Governors’ Climate and Forests (GCF) Task Force, which is a network of subnational governments and governors working to address climate-change multilaterally.

At the GCF annual meeting in Barcelona, COICA was joined by Central America’s AMPB, the Mesoamerican Alliance of Peoples and Forests.

“We’re at the Table”

“We believe we share many common characteristics and core beliefs with the jurisdictions represented in the GCF,” the AMPB declaration stated. “We actively participate in the region´s REDD+ processes, emphasizing the importance of community forest rights, and offering our experiences as key lessons and cornerstones for addressing deforestation in our jurisdictions.”

COICA’s statement was more prescriptive and called for active indigenous participation in the development of national climate action plans, or INDCs (Intended Nationally-Determined Contributions), and asked for a signed agreement with the GCF recognizing COICA participation in strategic planning and implementation.

The Evolution of the Amazon Indigenous Fund

Jintiach, who now is an analyst in COICA’s Economic Development Cooperation, says the Indigenous Amazon Fund is being created based on feedback from donor nations and with support from EDF and other NGOs.

“Juan Carlos raised this issue with us last year, when we were working with him on the indigenous mapping project [which was announced at climate talks in Lima],” says EDF’s Meyer. “He’s been working with us ever since to see how we implement it, and also talking to donors to get a better feel for what they look for.”

The fund proposal will be refined at a series of COICA meetings, beginning in August, but Jintiach and Meyer both say some basic ground-rules have already been established.

“One thing is clear: COICA won’t be running it,” says Jintiach. “We’re spearheading it, but we’re not a bank, and we don’t want to become one, and donors won’t want that, either.”

The Indigenous Amazon Fund is designed to be an independent entity answerable to an outside board of directors.

Based on donor feedback, COICA and others are now suggesting the creation of a non-profit entity, with an independent board of directors as well as an advisory board, says Meyer.

“This is still nebulous and to be determined, but there is this window in the next six months for indigenous leaders to consult among themselves and figure out what they want,” he says. “With COICA, we need to help to build a lot of capacity to understand how these administrative mechanism funds work, based on existing intermediary funds like Funbio (the Brazilian Biodiversity Fund), and we can then help them create a proposal that’s hopefully good enough for Norway to say, ‘OK, we’re going to put whatever is left [of the $100 million pledged] directly into this indigenous fund, and hopefully get other countries to contribute to it as well.'”

Although REDD+ finance was the impetus for creating the fund, it’s ultimately designed to handle banking, loans, and other financing operations.

“Something like Canopy Bridge, which is a platform for indigenous producers to market their products, could be supported through the fund,” says Meyer.

“Exactly,” adds Jintiach. “In Ecuador, we developed an indigenous cacao cooperative, but the benefits go to intermediaries, because the banks, they ask for lots of requirements that we as indigenous people find difficult.”

He says an Indigenous Amazon Fund would better be able to assess indigenous programs for their viability because it would be run by people who understand indigenous business practices.

“We need a financial institution that understands how our economies work on the ground,” he says. “Our people need to develop their own economies.”

Jintiach expects to have a formal proposal by the end of August, and Meyer estimates the start-up costs at less than $1 million.

“This is really for the next generation,” says Jintiach. “For my generation, this kind of finance was all new to us, but kids today understand its importance. They’re the ones who will move this forward.”

This series was made possible by a grant from USAID.

Forest people have managed their land sustainably for hundreds – and sometimes thousands – of years. They have, as a result, contributed the least to climate change, but they may suffer the most from its consequences. If that happens, their suffering will become our suffering as forests degrade and disappear, releasing billions of tons of carbon dioxide into the atmosphere.

That’s why environmental NGOs advocate for “Reducing Emissions from Deforestation and Degradation”. Thanks to their efforts, companies, governments, and individuals have voluntarily invested billions in climate action over the last quarter century, and now governments around the world have pledged more than $7 billion to REDD through the end of this year.

This article series Ecosystem Marketplace offers an accessible introduction to avoided deforestation actions and how they’re financed – and especially how it relates to indigenous people.

REDD Dawn: The Birth of Forest Carbon looks back at the world’s first REDD project, which was conceived in 1988 by the World Resources Institute. It offers a brief introduction to the science of carbon accounting and an overview of REDD within the climate talks.

Indigenous People Explore Many Shades of REDD looks at how REDD has evolved on indigenous territories to-date, and how indigenous leaders believe it must change to truly deliver on its potential.

ChocÃƒÂ³-DariÃƒÂ©n: What Projects Can – and Cannot – Achieve offers a deep dive into a project developed by the Afro-Colombian Tolo River People – and a primer on how REDD plays out on the ground.

The Surui Forest Carbon Project: Lifeline For A Life Plan offers a detailed glimpse inside a pioneering indigenous project built on an indigenous Life Plan. Initially posted in 2013, it’s a bit dated, but still a good read.

Avoiding Deforestation And Green Supply Chains: The Yin And Yang Of Saving Forests examines role that REDD finance can play in helping to purge deforestation from corporate supply-chains.

Indigenous People Build Fund For Direct Access To Climate Finance explores how indigenous groups of the Amazon are solving the funding flow problem with an independent indigenous fund.