Indigenous people have long been among the world’s most responsible land stewards, and they are well-positioned to gain from programs that harness carbon payments to save endangered rainforest. Leaders in Warsaw argue, however, that such programs will only work if they incorporate indigenous values and realities. 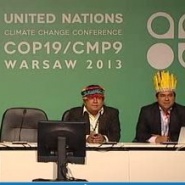 Indigenous people have long been among the world’s most responsible land stewards, and they are well-positioned to gain from programs that harness carbon payments to save endangered rainforest. Leaders in Warsaw argue, however, that such programs will only work if they incorporate indigenous values and realities.

14 November 2013 | WARSAW | Indigenous issues are a central focus of climate talks here this week and next, especially when it comes to programs that use carbon finance to save endangered rainforest (Reduced Emissions from Deforestation and Degradation, or “REDD”).

“It is important to understand how indigenous people are responding to climate change,” said Juan-Carlos Jintiach on Tuesday. “We have made much progress with holistic management pilot projects.”

Jintiach is the economic coordinator for COICA (Coordinadora de las Organizaciones Indí­genas de la Cuenca Amazí³nica, or “Coordinator of Indigenous Organizations in the Amazon Basin”), which is an alliance of associations and peoples within the Amazon that aims to empower indigenous populations and defend them in human and property rights issues. COICA along with the Indigenous Association of the Peruvian Rainforest (Asociacií³n de Indí­genas de la Selva Peruana or “AIDESEP”) discussed the forest conservation work the indigenous groups are doing at a press conference at the 19th Conference of the Parties (COP 19) to the United Nations Framework Convention on Climate Change (UNFCCC) on Tuesday.

Jintiach said that REDD will only work if it recognizes that different tribes have different views and priorities regarding what can and can’t be done on their land. That, in turn, makes it necessary that they are heard in any negotiating process regarding the land they live on. This type of conservation isn’t just focused on carbon, Jintiach said, but other elements relevant to a forests’ prosperity. These include genetic richness, biodiversity, pollination, etc.

Meanwhile, Roberto Espinoza of AIDESEP said that while all REDD projects have the same principles, they can’t be implemented the same way when applying REDD to private initiatives, protected areas or indigenous lands. “There have to be adjustments,” he said.

Espinoza also stressed that companies invested in indigenous REDD projects in the Amazon should, among other things, make internal changes in their policies and practices that reduce emissions. He went on to note that indigenous REDD has been accepted in Peru and made advances in Colombia and Brazil.

The mechanism has been revised to include long-term life planning, territorial status, comprehensive holistic forest management (not just management of the carbon), increased monitoring and an increase in reducing industrial emissions.

Proposals for the revisions came from a host of governments, organizations and agencies including UN REDD, UNCTAD (United Nations Conference on Trade and Development) and the cooperation organization promoting a united Latin America, ALBA (Bolivarian Alliance for the Peoples of our America).

During the meeting, indigenous leaders called on COP 19 participants to not only reflect on climate change, but also to initiate the same type of action indigenous communities are implementing in 5 million hectares of Latin American forestland. They also asked participating countries to put a premium on indigenous rights during negotiations.

Representatives during the press conference mentioned a summit of Amazon indigenous leaders that will be held later this month in Colombia.

Leaders emphasized how indigenous peoples expect to be key players during climate talks and how the following COP will be in Lima, Peru. There, they will continue to seek a “solution that works for the good of people and the planet.”

Ciro Calderon is Program Assistant at Valorando Naturaleza, based in Baja California Sur, Mexico. He can be reached at ccalderon@valorandonaturaleza.org.

This article has been adapted from IndÃƒÂ­genas amazÃƒÂ³nicos discuten en Varsovia avances y desafÃƒÂ­os que ven en REDD+ en la cuenca amazÃƒÂ³nica which appeared in Spanish on Valorando Naturaleza, a sister site to Ecosystem Marketplace focused on Latin America. It was adapted into English by Kelli Barrett and Steve Zwick.