Indigenous people have always been among the most responsible stewards of forestland, and new research backs that up. A report released today at the Oslo REDD Exchange 2013, an international conference in Norway, identifies a clear correlation between indigenous land tenure and healthy forests. 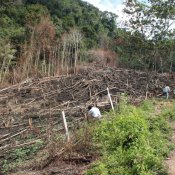 Indigenous people have always been among the most responsible stewards of forestland, and new research backs that up. A report released today at the Oslo REDD  Exchange 2013, an international conference in Norway, identifies a clear correlation between indigenous land tenure and healthy forests.

29 October 2013 | A delegation of leaders from indigenous and community organizations in Mesoamerica will today tell an international conference in Oslo, Norway, focused on REDD+ that one of the keys to combating climate change can be found in their region, where strong land rights are enabling their people to fend off the agents of deforestation and reduce greenhouse gas emissions that lead to climate change.

Findings to be presented in Oslo by PRISMA, a research institute in El Salvador, and the Mesoamerican Alliance of Peoples and Forests (AMPB), suggest that countries in Mesoamerica have been handing back rights to indigenous peoples in recent decades, and a pattern of improved forest protection is emerging. Those local communities in Mesoamerica with strong land rights are outperforming governments and industry in conserving the forests under their care.

“Mesoamerica has made enormous progress in the recognition of communal rights over forest lands. Sixty percent of the forests in the region are owned or managed by forest communities and indigenous peoples,” said PRISMA’s Andrew Davis. Davis is a co-author of the PRISMA/AMPB study and a participant in the Oslo meeting.

The study found a strong correlation between forest cover and sites where indigenous communities have meaningful rights over land tenure. In Panama, Indigenous people manage more than 50 percent of the country’s mature forests. There, and in Guatemala and Honduras, deforestation pressures are especially fierce and forests that are controlled or claimed by indigenous peoples and forest communities are often surrounded by deforested areas under exploitation for mining, logging or agriculture.

“On the map of Guatemala, our lands look like islands in a sea of devastation,” said Marcedonio Cortave, from the Association of Forest Communities of Petén (ACOFOP). “The lands that surround the forests of indigenous communities are being destroyed.”

“Deforestation is a key driver of climate change,” said David Kaimowitz, director of Sustainable Development for the Ford Foundation. “The indigenous and traditional communities, with support from civil society, have created a groundbreaking solution to the problem of deforestation and global warming as well as a new model for sustainable development.”

Kaimowitz points to the Amazon, as an example where stronger rights has led to forest conservation. 21% of the entire Amazon Basin region—1.6 million square kilometers, an area one and a half times the size of Bolivia—is now in recognized Indigenous territories. This progress has contributed to the dramatic decline in deforestation in Brazil between 2004 and 2011.

Now indigenous communities want to share their experiences with the rest of the world. They believe that their successful struggle for rights could serve as a model, not only for justice for indigenous peoples but also for better outcomes in reducing emissions from deforestation and degradation, known as REDD+. REDD+ is one of the main mechanisms promoted by international agencies to mitigate the impacts of climate change globally.

“Countries in the Mesoamerican region lead the world in respecting land rights through a variety of legal mechanisms that have allowed locally owned REDD+ approaches to emerge, especially in autonomous territories,” Davis said.

Hector Huertas, a representative of the National Coordination of Indigenous Peoples of Panama (COONAPIP), said his mission in Oslo is to spread the word about the work being done in Panama to implement REDD+.

Huertas and Davis are attending the Oslo meeting with other leaders from Mesoamerica, including Victor Lopez Illezcas, who will represent the experiences of community forestry in Guatemala, through which communities sustainably manage 1.2 million hectares of forests.

Threats to progress in Mesoamerica

Despite the encouraging progress in forest conservation being made in Mesoamerica, the PRISMA report shows that it could be reversed by a failure of governments to recognize or enforce indigenous rights over their territories. Moreover, where rights are unclear or unenforced, drug traffickers are more likely take advantage of the lack of control to develop their criminal activities.

Even in successfully managed community forests where rights have been granted to indigenous groups and rural communities, some governments are succumbing to pressure and granting development concessions to foreign interests, especially for hydropower and minerals.

“Demand for land, hydroelectric power and extractives is testing the resolve of governments and our ability to continue to protect our forests, even after we receive significant rights to manage our lands,” said Cortave.

The problem spans the Mesoamerican region.

“Panama has one of the strongest systems of indigenous land rights in Central America, and yet its leaders are struggling to be allowed a seat at the table in deciding the future of our forests,” said Yuro Bacorizo, a member of the General Congress of Collective Lands of the Embera Wounaan in Panama.

The delegation of representatives of indigenous and peasant organizations in Mesoamerica will participate in the Oslo REDD Exchange 2013, to be held on 29–30 October in Oslo, Norway. The group’s mission is to expose participants to the world the progress made in terms of innovative ways to conserve forests.