The Brazilian state of Acre has implemented a comprehensive legal framework to support compensation and payments for ecosystem services, and indigenous groups are among the first to begin implementing it. Here’s a look at how the program is being rolled out. 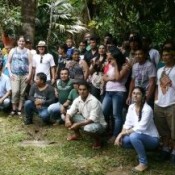 9 March 2012 | Indigenous villages dot the Amazon rainforest along the border between Brazil and Peru, and everyone agrees that the people who live in them have taken better care of their lands than have the Portuguese and Spaniards who came later.   That stewardship could soon be rewarded as the Brazilian state of Acre implements its System of Incentives for Environmental Services (Sistema de Incentivo a Serviços Ambientais, or “SISA”), an ambitious legal framework that Acre created two years ago to support compensation and payments for ecosystem services.

The indigenous program is actually one of four SISA subprograms in the works, each aimed at a different key stakeholder group.   The others are medium-to-large rural producers, small family farmers, and forest communities such as rubber tappers.

The state government is beginning with indigenous groups because of their unique relationship with the land, and it has spent the last two years engaging indigenous leaders – both to explain the goals of the program and to seek input on how to best implement it.

“This is a chance to work with the state, rather than to sit back while the state runs and manages everything,” says Jose Ninawí¡, a member of the Kaxinawí¡ and president of the Huni Kuin Indigenous Federation (the Kaxinawí¡ call themselves Huni Kuin or true people).   “We need the support and partnership of the state, but the state also needs us if this effort is to be sustainable.”

He is one of 40 leaders who participated in a weeklong February workshop hosted by the state of Acre and the Communities and Markets Program of environmental non-profit Forest Trends (publisher of Ecosystem Marketplace), along with the Pro-Indian Commission of Acre (Comissí£o Prí³-Indio do Acre, or CPI-AC) a local organization that has been supporting indigenous peoples in Acre for over 30 years. It’s the first in a series of workshops for indigenous leaders in 35 territories over 2.4 million hectares.

Participants spent the first half of the week learning about the SISA law and relevant topics including PES, indigenous rights, and other communities’ experiences.   They spent the second half offering their advice on how SISA should be implemented.

“The next step is to have dialogues closer to the villages with the participation of communities, shamans, and chiefs,” says Eufran Amaral, CEO of the Institute of Climate Change and Ecosystem Services Regulation (Instituto de Mudanças Climí¡ticas e Regulaçí£o de Serviços Ambientais, or IMC), the government agency that is implementing SISA.

“The actions that the law requires on the ground are nothing new to us,” says Joaquim Maní¡ Kaxinawí¡, an indigenous leader who is also working towards a doctorate in linguistics at the University of Brasilia.   “We already practice sustainable management of natural resources, we’re already careful with the water that exists in the area, and we have always tried to preserve our language and culture.”

But until now, he says, they never thought any of that was something they could be compensated for, as that is their way of life, respecting the forests that sustain their communities for generations.

“The nomenclature and procedural issues needed to comply with the law are quite complex,” he says.   “And it’s not yet clear what will be sold, how it will be sold, who will buy it, who will negotiate, and what constitutes a deliverable.”

Two more meetings are planned for later this year along major tributaries of the Amazon – one along the Purus River and the other along the Juruí¡ River.   Both will incorporate methods developed at the first workshop.

About 88% of Acre’s original forest cover is still standing, an impressive 12.8 million hectares. While only 1.6% of deforested areas in the state lie within indigenous territories, the expansion of economic development in the region is increasing the threat of further deforestation and other impacts in these areas. Unsound natural resource extraction in the surrounding areas, particularly driven by illegal logging and mining, has led to invasions of indigenous territories.

Extensive agriculture and cattle ranching expansion, if left uncontrolled, may encroach upon indigenous lands. New large energy and infrastructure development projects in the region in oil, gas, and road building will likely increase the rate of deforestation.   Brazil’s National Petroleum Agency (Petrobras) has announced plans to explore for oil and gas reserves in the State of Acre which could intrude in indigenous territories as well. With the completion of the Interoceanic Highway, which connects Acre to ports on the Peruvian coast, the economy of Acre is becoming more integrated with Pacific rim markets (including China), as well as with growing markets within South America, boosting the pressure on the state’s natural resources base.

Investing in an integrated strategy for conservation in Acre which protects the states’ vast remaining intact forest with its high biodiversity and other ecosystem services and that secures the rights of thousands of indigenous peoples to their territories and livelihoods is of ultimate importance and extremely timely. The states’ progressive environmental policies, combined with an avid civil society and strong indigenous peoples’ movement, offer the opportunity to create effective incentives for conservation that will at least minimize the impact of the rapid economic growth underway in the Western Amazon region.

With 12.8 million hectares of forests standing, 88% of the original forest cover, SISA provides the legal basis and framework for the Acre’s evolving REDD regime. This jurisdiction-wide program offers an innovative model in the international discussions to implement REDD, as seen in the existing agreement between the states of Acre and California. Yet, for SISA to be successful, it needs to involve the direct participation of local indigenous people.