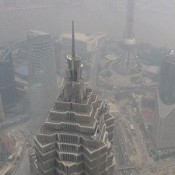 4 March 2013 | As China’s air pollution problems persist, people there are calling for more action – and the media is taking the rare step of amplifying those calls.

The Atlantic has a video that will let you take ten minutes to understand china’s environmental emergency.

Kloor refers to Jon Foley, director of the Institute on the Environment at the University of Minnesota, who challenges environmentalists with an essay that begins… We are supposed to be in the business of changing the world. The question is: are we?

Garry Peterson at the Resilience Science blog, has been looking into the World Economic Forum’s Global Risks 2013 report, which he calls “an interesting, but one eyed view of the global risk landscape.

Dan Kahan, who leads the Cultural Cognition Project at Yale Law School, answers his own question: “What would I advise climate science communicators

Randy Olson says the “climate movement HAS to take the skeptics seriously (not ignore them), but should refuse to engage with climate skeptics in IRRATIONAL VENUES.” Read more in his blog post “Ignore or Boycott?”

In The Guardian, John Vidal reports that the World Bank’s own evaluators say its investments support logging and do little to help rural poor people.

Researcher Maureen McCarthy wrote about conflict between chimpanzees and people in Uganda. SciDev.Net reports on the first meeting of the Intergovernmental Platform on Biodiversity and Ecosystem Services.

Keith Kloor reports on a new review paper in the journal Science about how many species there are and how fast they are going extinct – and how the media has interpreted it in different ways.

Anju Sharma has set up a new blog, called “It must be said!” She has already posted about the Green Climate Fund and the Intergovernmental Platform on Biodiversity and Ecosystem Services

Anna de Costa has started a new series at her Seeking Alchemy blog called Voices of the Anonymous. It “aims to explore some of the stories behind the unseen in India; those who form the backbone of India’s economy, who we rely upon every day but rarely see, let alone consider beyond the assumptions we might have.” Part one is here.