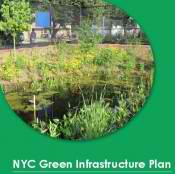 2 November 2012 | When New York Mayor Michael Bloomberg endorsed Barrack Obama’s reelection bid on Thursday, he did more than just embrace the scientific consensus on climate change. He also demonstrated an awareness of the fact that our entire economy is embedded in – and dependent on – nature.

Locally, the awareness has been manifest in a debate over whether or not to build sea gates off the New York shore, but it really goes much deeper than that. In the weeks and months ahead, we can expect to hear more about the need to revive the planet’s once reliable “green infrastructure” – and, in New York’s case, that means replenishing the salt marshes that once acted as natural surge protectors, restoring the wetlands that once provided water filtration and flood control, and righting the rivers and streams that once dealt so effectively with stormwater runoff.

New York City has already taken steps in this direction.   Over the past two years, it launched both an ambitious “green infrastructure” plan aimed at rivers and streams, and a wetlands strategy aimed at salt marshes and wetlands.

Such natural elements are often better at protecting the coast because they don’t muscle storm surges but rather absorb them. They also tend to be cheaper to build and maintain than are massive engineering works, and they’re almost always prettier to look at. Done right, they can even pay for themselves over time.

How to Pay For It

New York is hardly alone in this endeavor. Philadelphia, for example, has developed innovative financing mechanisms that use stormwater fees to finance the installation of absorbent “green” sidewalks, roofs, and parking lots, while also restoring nature.

Such mechanisms can help us build a green infrastructure that is more resilient in the face of disasters like Hurricane Sandy – the costs of which are spiraling upwards in the US and globally, as two recent reports from insurance giants Munich Re and Swiss Re show.   Each published their reports in the past year documenting the magnitude of the issue and calling for action to reduce exposure of communities and business to the risks from natural disasters.

Where is the Evidence

More and more scientific studies show that ‘natural infrastructure’ along our rivers and coasts can play a significant role in reducing the damage from storm surges. A 2007 study of New Jersey’s wetlands, for example, estimated that freshwater wetlands saved the state $9.4 billion per year in filtrating and flood control costs, while its saltwater wetlands delivered $1.2 billion per year in protection.   This, of course, was before Hurricane Sandy, and well after the state had lost most of its protective wetlands. Hackensack, NJ – one of the hardest hit states in Hurricane Sandy – lost more than 75% of its wetlands between 1889 and 1995, according to the US Geological Survey.

The state of Delaware, which has lost more than 50% of its historic wetland area, has found a similar pattern, and in 2008, a team headed by ecological economist Robert Costanza looked at economic damages associated with 34 major hurricanes in the US since 1980. They found that areas with coastal wetlands experienced lower damages compared to areas without coastal wetlands – to the tune of up to $100,000 in damages per hectare of lost wetland.

Restoring these natural barriers and filters isn’t cheap, but it’s often less expensive than implementing massive engineering projects like sea gates. What’s more, as Philadelphia has shown, the knock-on benefits of developing green-infrastructure projects makes them incredibly easy to finance – with a bit of creativity.

This adds to their cost-effectiveness, because reversing the loss of this natural infrastructure also has many other co-benefits – including healthier fisheries along our coasts, increased habitat for shorebirds and other animals, recreation and tourism opportunities, improved water quality, more abundant shellfish, and scenic beauty.

This is something New York has demonstrated especially well over the last 15 years, thanks to the success of its own innovative water delivery system.   Rather than spend billions on a new filtration plant, the city pays farmers in the Catskills to maintain the watershed. Two years ago, Denver started a similar program.

These are just some of the potential solutions kicking around out there, and more will follow if politicians take the lead.   That leadership starts with questions like the one New York Governor Andrew Cuomo tweeted on October 30, when he asked “How do we redesign the system to make sure this doesn’t happen again?”